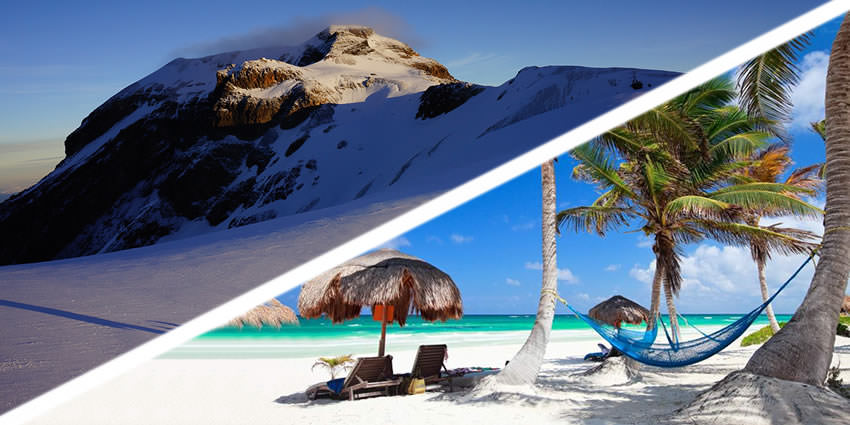 The climate of Mexico is highly varied.

Areas south of the twentieth-fourth parallel with elevations up to 1,000 meters (the southern parts of both coastal plains as well as the Yucatán Peninsula) have a yearly median temperature between 24 and 28 °C.

Temperatures here remain high throughout the year, with only a 5 °C difference between winter and summer median temperatures.

Although low-lying areas north of the twentieth-fourth parallel are hot and humid during the summer, they generally have lower yearly temperature averages because of more moderate conditions during the winter.

Towns and cities at this elevation south of the twenty-fourth parallel have relatively constant, pleasant temperatures throughout the year, whereas more northerly locations experience sizeable seasonal variations.

Above 2,000 meters, temperatures drop as low as an average yearly range between 8 and 12 °C in the Cordillera Neovolcánica.

Rainfall varies widely both by location and season. Arid or semiarid conditions are encountered in the Baja California Peninsula, the northwestern state of Sonora, the northern altiplano, and also significant portions of the southern altiplano. Rainfall in these regions averages between 300 and 600 millimeters (11.8 and 23.6 in) per year, although even less in some areas, particularly in the state of Baja California.

Average rainfall totals are between 600 and 1,000 millimeters in most of the major populated areas of the southern altiplano, including Mexico City and Guadalajara.

Parts of the northern altiplano, highlands and high peaks in the Sierra Madres receive yearly snowfall. Citlaltépetl, Popocatépetl and, Iztaccíhuatl continue to support glaciers, the largest of which is the Gran Glaciar Norte.

Mexico has pronounced wet and dry seasons. Most of the country experiences a rainy season from June to mid-October and significantly less rain during the remainder of the year. February and July generally are the driest and wettest months, respectively.

Mexico City, for example, receives an average of only 5 millimeters of rain during February but more than 160 millimeters in July.

Coastal areas, especially those along the Gulf of Mexico, experience the largest amounts of rain in September. Tabasco typically records more than 300 millimeters of rain during that month.

A portion of northwestern Baja California has a Mediterranean climate influenced by the California Current, with a rainy season that occurs in winter and coastal regions receiving considerable fog.

Another area of the Mediterranean climate as a result of elevation occurs in the interior of Sonora.

Mexico lies squarely within the hurricane belt, and all regions of both coasts are susceptible to these storms from June through November. Hurricanes on the Pacific coast are often less violent than those affecting Mexico’s eastern coastline. Several hurricanes per year strike the Caribbean and Gulf of Mexico coastline, however, and these storms bring high winds, heavy rain, extensive damage, and occasional loss of life.

Hurricane Gilbert passed directly over Cancún in September 1988, with winds in excess of 200 kilometers per hour, producing major damage to hotels in the resort area. It then struck northeast Mexico, where flooding from the heavy rain killed dozens in the Monterrey area and caused extensive damage to livestock and vegetable crops.