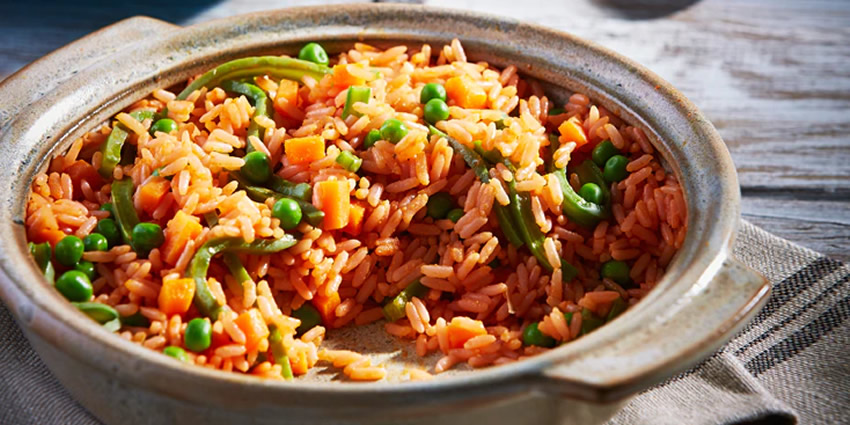 Talking about rice in Mexican cuisine, the first image that usually comes to mind is the traditional red rice, with “mole poblano”, served on a Talavera-style plate. Without any doubt, rice is the loyal companion of all “moles” (sauce) in Mexican cuisine.

There is an infinity of dishes with rice in Mexican traditional cuisine with the three most popular rice colors (Mexican flag colors):

Mexican rice pudding – The rice pudding whose recipe has evolved from a sweet delicacy to the traditional Mexican dessert. Its recipe was enriched as of 1836 when the famous condensed milk “La Lechera” appeared for the first time in Mexico and on its label the recipe for rice pudding, now with condensed milk replacing brown sugar, sugar, or honey.

Arroz a la Tumbada – The municipality of Alvarado in the state of Veracruz provided Mexican cuisine with “arroz a la tumbada” (“lying down rice”), rice with seafood, tomato, and epazote (a tall herbaceous plant used as a pungent culinary herb and vegetable).

Morisqueta, boiled rice, steamed until fluffy and generally unseasoned, is a dish found in the states of Colima, parts of Michoacán, and Jalisco.

The state of Morelos, being a rice-producing state, has developed its own gastronomy with unique dishes, such as rice cakes that can be prepared with ground rice or in the same way as the traditional meatballs using the rice from the day before.

The Jojutla rice tamales were prepared by the wives of the rice producers, who cultivate the field. These tamales are salty, there are vegetables, green and red.

At first glance they seem to be traditional corn dough tamales, however, when tasting them their consistency is a bit different, and very small pieces of rice are perceived.

In some Jojutlan places they prepare the traditional Canarian tamales whose origin is attributed to Michoacán, the recipe includes rice flour and they are sweet. They owe their name to the yellow color of the dough it takes when they are prepared only with butter.

In the center of Cuautla from an early hour and throughout the day, you can find street vendors of rice tacos.

In Cuernavaca, there are traditional armored tacos, a Morelos snack whose origin dates back to 1908 and which became popular thanks to the Mexican Revolution.

Mexican-style rice in a bowl with Huevos Rancheros

Though this dish is commonly served for breakfast, this Mexican-style rice bowl recipe with “Huevos Rancheros” is versatile enough to enjoy it at any time of the day.

To add a little extra flavor and make an even more Mexican dish, sprinkle freshly cut chili pieces over your rice bowl. You can also add a touch of your favorite tabasco chili sauce.