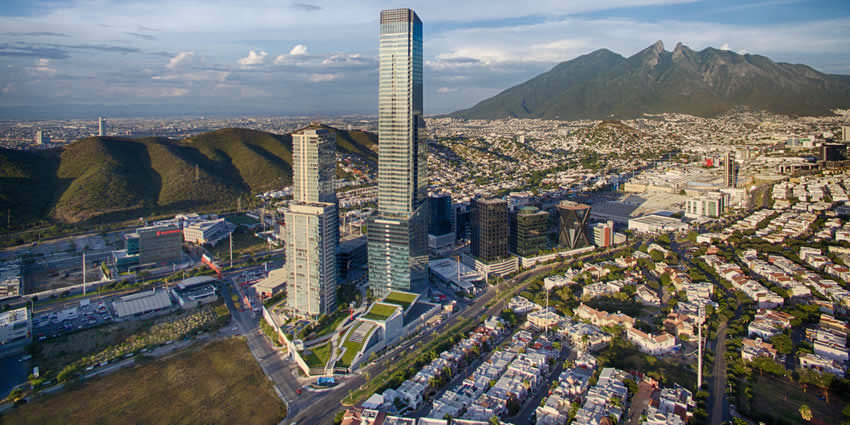 San Pedro Garza García (also known as San Pedro or Garza García) is a city-municipality of the Mexican state of Nuevo León and part of the Monterrey Metropolitan area.

It is a contemporary commercial suburb of the larger metropolitan city of Monterrey between Puente de la Unidad and the Alfa Planetarium, including areas surrounding Calzada del Valle/Calzada San Pedro.

Cerro de Chipinque and Chipinque Ecological Park are notable aspects of the city.

The municipality has an area of 69.4 km² (26.8 sq mi) and is almost entirely urban, lying adjacent to the southwest side of Monterrey. It sits in a valley surrounded by mountains; most notably La Loma Larga and Sierra Madre Oriental.

In 1596 was the founding of San Pedro Garza Garcia.

The land was converted into a large plantation called “Los Nogales”, where crops like corn, wheat, beans, and many other foods were produced.

During the 18th century, the plantation often went by the name of “San Pedro”, in honor of Saint Peter.

The city was not elevated to the status of “Villa” (Village) until December 14, 1882, when it was given the name Garza García, in honor of the governor of Nuevo León, Genaro Garza García.

It was not until 1988 that the mayor at the time, Alejandro Chapa Salazar gave the city its current name, adding the reference to what it was called centuries before.

San Pedro boasts one of the best preserved national parks in the country, the Chipinque park, within the Parque Nacional Cumbres de Monterrey. The park is located at the foothill of the Sierra Madre, and is the only naturally forested spot in metropolitan Monterrey.

Centro Cultural Alfa. A science interactive museum, the first one of its kind in Mexico. It is located within a tilted column-shaped structure and surrounded by lush gardens. It is worth to visit, especially for kids. There is a good planetarium, and an impressive masterpiece glasswork by Rufino Tamayo.

Shopping Malls. The Paseo San Pedro and Plaza Fiesta San Agustín malls with some of the best stores in town. Paseo San Pedro is the newest mall in San Pedro. It includes a movie theater, a NH hotel, a Palacio de Hierro store, and a food court.

Calzada del Valle/Calzada San Pedro. Beautiful three lane intersecting gardened boulevards. Some of the most exclusive stores lie on this avenue (Louis Vuitton, Fendi, Cartier, among others). Joggers can be seen in the mornings. In Christmas, trees are lit by thousands of lights to add splendor to the zone.

El Centrito. A traditional place to drink a good coffee, have dinner or meet friends in a casual environment. Many restaurants and nightclubs are located here. For San Pedro residents, “El Centrito” is the go to place on a weekend. Nightclubs include, The City, D-Club, Republica, Ness, Sr. Mostacho and Abolengo.

The Avalanz Tower. The second tallest skyscraper in the Monterrey metropolitan area, and the third tallest in Mexico outside Mexico City. Previously named Dataflux Tower.

The Comercial America Tower. The second to the tallest skyscraper in the metropolitan area.

Barrio de Tampiquito – A lower income area, known for its creativity fairs, which promote the workshops of the craftsmen in the neighborhood. Tampiquito has its own symbol – the Lion of Tampiquito – a symbol that plays an important role in the integration of the area.

Centro Cultural Alemán. Representative German school of the German embassy. Zazil Treviño is the name of the coordinator.

Rufino Tamayo park. One of the biggest parks in San Pedro, which has a great view of the Valle Oriente skyline and features a leash free pen for dogs.