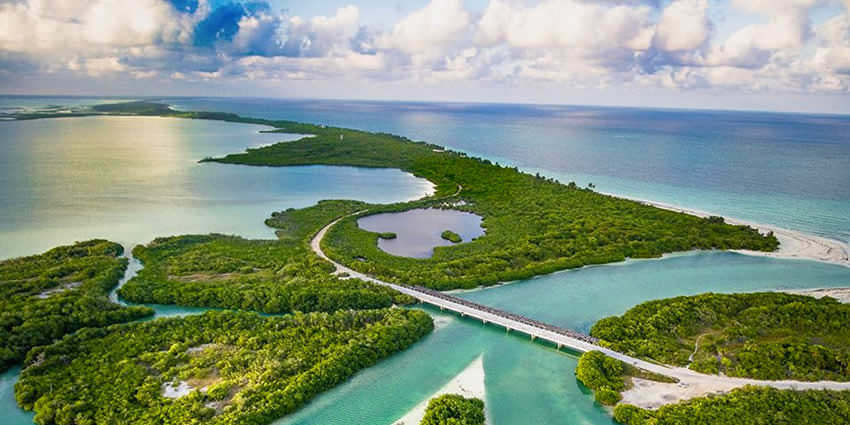 The Sian Ka’an is a protected natural reserve. Its located on the Caribbean coast of the Quintana Roo state. It was established in 1986 and in 1987 it was declared a World Heritage Site by UNESCO.

“Sian Ka’an” in the Yucatec Mayan means “gate of heaven” or “the place where heaven begins.”

Sian Ka’an covers an area of 528 thousand 147 hectares. The reserve is part of the geological province of the Yucatan Peninsula.

Sian Ka’an main feature is the flatness of the relief. The surface here is mainly made of limestone, which prevents the formation of surface currents of water and favors the outcrop (cenotes).

The famous coral reef complex lies in front of the Sian Ka’an coasts. This coral reef is the second largest of its kind, after the Great Barrier Reef of Australia.

On the coastal side of the Sian Ka’an Reserve, there are wide sand beaches, small bays, and mangroves, among other ecological systems. Each of these places houses different types of local fauna.

The weather is warm and subhumid. The rainy season occurs during the summer. Due to its location off the Caribbean coast, Sian Ka’an is exposed to hurricanes that take place here between June and November. Due to the deficient natural drainage of the area, in the rainy season, a good part of its surface remains flooded in the summer.

A very peculiar ecosystem in the Sian Ka’an wetlands is that of the so-called petenes, a mass of trees that can measure up to thirty meters high and that rise between the swamp grasses. These plant formations are almost unique in the world because outside the Yucatan Peninsula, they exist only in the US state of Florida and in Cuba.

They are mostly oval or circular and their size varies from a few tens of meters to almost two kilometers in diameter. They are generated due to the presence of freshwater springs, which sprout in the middle of brackish water marshes and allow the growth of large black trees.

There are 23 archaeological sites in the reserve, including Muyil and Tampak, among others.

The Reserve is managed by the federal government of Mexico through the National Commission of Natural Protected Areas that collaborates very closely with non-governmental organizations, producer organizations, research institutions and private initiative.

Quintana Roo has become one of the main tourist destinations in Mexico in recent decades. Although the influx of tourists to Sian Ka’an is still limited, their presence could be a factor that threatens the ecological balance in the biosphere reserve area.

On the other hand, the ecosystems of the region have been affected by human activity in recent years. Some areas of the reserve have been deforested to extract timber species from them. The devastation of the original flora has led to the introduction of strange species such as casuarina. On the other hand, maritime traffic has jeopardized the barrier reef and associated ecosystems.

Rules & Recommendations for your visit

Follow the instructions of the ANP staff and specialized guides: