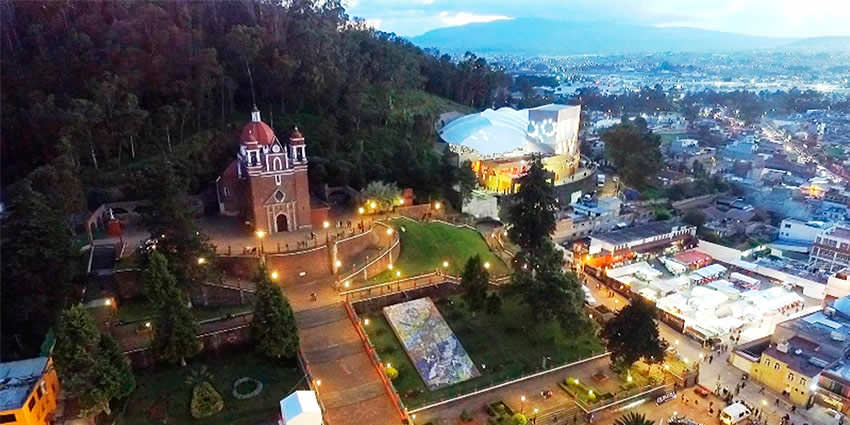 Metepec is a city and municipality in the State of Mexico in Mexico and is located directly to the east of the state capital, Toluca, at an altitude of 2,635 metres (8,645 ft) above sea level.

Due to its altitude, average temperatures here vary between 14 and 30 °C with cold spells down to -5 °C that can occur as late as March or April.

The name Metepec comes from Náhuatl meaning hill of the maguey plants.

However, it is also known in the Matlatzinca language as “Nepinta-Tuhi” meaning ‘people of corn land’ and in the Otomi language as “Ntaguada”.

The municipality covers an area of 70.43 km² (27.19 sq mi) and includes several smaller communities besides Metepec.

Most commercial activity occurs in the city of Metepec proper and has grown considerably in the past years, along with its population.

During the Spanish Conquest, Gonzálo de Sandoval and his Otomi allies, conquered Toluca, Tenango, Tlacotepec, Tecaxic-Calixtlahuaca, Calimaya along with Metepec and other Matlatzinca and Mexica population centers, whose lands were then abandoned by the natives.

These lands were then redistributed among the Spaniards who participated in the Conquest and to those local chiefs that supported the Spanish.

Lands in and around Metepec were given to Captain Juan Gutiérrez Altamirano, who brought the Franciscans in to evangelize the area, and then these lands passed on to form the estates of the Counts of Santiago.

The area was considered an “alcaldía mayor” (literally ‘major mayorship’) by 1560 with the village of Metepec as its seat.

Records of municipal government transactions begin in the 19th century.

Finally, the municipality of Metepec was created in 1821; although this was not ratified by the government of the State of Mexico until 1827.

The city centre lies at the foot of the hill that gives the city and municipality its name.

There has been a community here since the Otomis and Matlatzincas settled in this part of the Valley of Toluca: the Matlatzincas reached their cultural peak between AD 1120 and 1450 as part of the Teotihuacan culture.

The Aztecs conquered this community, along with the rest of the area by AD 1470 by the tlatoani (chief) named Axáyacatl.

The Spanish arrived here in AD 1526 obliterating native rites that were practiced on the “maguey hill” and built a church there, now-called the Ex-convento de San Juan, renaming the area San Juan Bautista Metepec.
According to the Codex of Metepec the Spanish town was founded in the same year.

The Cerro de Maguey (Maguey Hill) has a number of small caves with names like “La cueva del diablo” (The Devil’s Cave) that can be explored.

The 24th of June is the feast day of Metepec’s patron saint, John the Baptist.

Additionally, since 1990 the city has an international arts and culture festival called Quimera, which occurs in October.

While most of the food in Metepec is typical of the region (with dishes such as barbacoa, tamales, and huaraches) it does have a unique drink called “Garañona”.

It is made from 15 herbs and is a strong, sweet drink. Some locals say it is an aphrodisiac.

The only place that sells and distributes this drink is a bar called the “2 de Abril”, located in the city centre.

Metepec is known for its pottery items and it is still of economic importance.

Principal crafts include objects made from clay, glass and includes saddlemaking.

The city has about 300 craftsmen as well as 275 family workshops.

The craft Metepec is best known for is the Arbol de la vida (“Tree of Life”) which is a traditional pottery representation of the tree from which Adam and Eve ate in the Biblical story.

Monday is market day in the city centre, called plaza, where merchants go to sell fruit, vegetables and even a few electronic items.

The original village of Metepec regards the Tree of Life as representative of this municipality and some local workshops still produce this brightly painted pottery artifact.