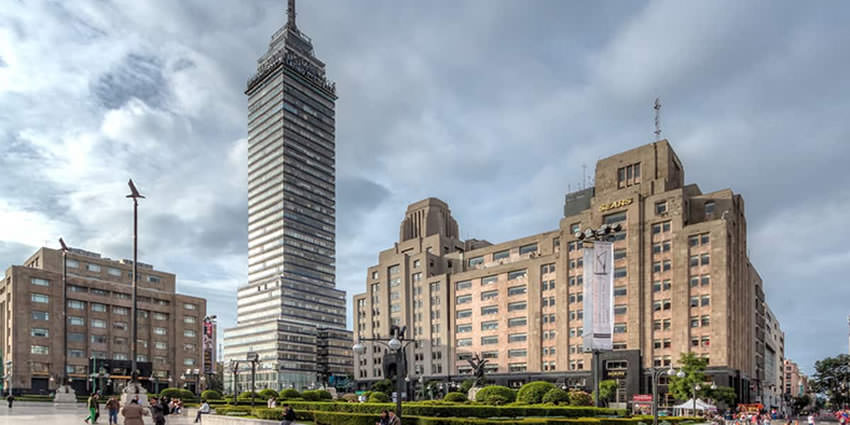 The Torre Latinoamericana (Latin-American Tower) is a skyscraper in downtown Mexico City, situated in the historic city center. Its central location, height (166 m), and history make it one of the city’s most important landmarks.

It is widely recognized internationally as an engineering and architectural landmark since it was the world’s first major skyscraper successfully built on a highly active seismic zone.

The skyscraper notably withstood the 8.1 magnitudes 1985 Mexico City earthquake without damage, whereas several other structures in the downtown area were damaged.

The Torre Latinoamericana was Mexico’s tallest completed building for almost 27 years, from its opening in 1956 until 1982 when the 211.3 m tall Torre Ejecutiva Pemex was completed.

Although the structure of the Hotel de México (now known as the WTC Mexico City) had already surpassed it a decade earlier, it wouldn’t be finished until 1994.

Many think it was the first skyscraper in Mexico. However, skyscrapers may have first appeared in Mexico City between 1910 and 1935.

The Latinoamericana Tower opened its doors on April 30, 1956.

The site where the Latin American Tower currently stands was formerly occupied by the animal house of the Tlatoani Mexica Moctezuma II, and after the conquest, there was built Convent of San Francisco.

The building took its name from this company as it began to be built during the postwar boom of the late 1940s, which lasted until the early 1970s.

At the time of its construction, the insurance company was controlled by the Mexican tycoon Miguel S. Macedo, who headed one of Mexico’s largest financial consortiums at the time.

Originally the insurance company occupied a smaller building at the same location. In 1947 it temporarily relocated to a nearby office while the tower was built.

Once it was finished in 1956, the insurance company moved into the tower’s 4th to 8th floors. The rest of the building’s office space was for lease.

Its public observation deck on the 44th floor is the highest in Mexico City.

The project was designed and executed by Mexican civil engineers. Its design consists of steel-frame construction and deep-seated piles, which were necessary given Mexico City’s frequent earthquakes and muddy soil composition, which makes the terrain tricky to build on.

Before construction, engineers carried out a number of soil mechanics studies in the construction site and designed the structure accordingly. Today this is common and even mandatory practice, but at the time it was quite an innovation.

The tower gained notoriety when it withstood the magnitude 7.9 1957 earthquake, thanks to its outstanding design and strength. This feat garnered its recognition in the form of the American Institute of Steel Construction Award of Merit for “the tallest building ever exposed to a huge seismic force” (as is attested by plaques in the building’s lobby and observation deck).

However, an even greater test came, by far, with the magnitude 8.1 September 19, 1985 earthquake, which destroyed many buildings in Mexico City, especially the ones built downtown, in the tower’s neighborhood. The Torre Latinoamericana withstood this force without problems and has thus become a symbol of safety in Mexico City. Today the tower is considered one of the safest buildings in the city despite its potentially dangerous location.

While it was being built, detractors said that there was no way a building of that size could withstand one of Mexico City’s earthquakes.

The truth is that during the September 1985 earthquake, which took place at 07:19 in the morning, Adolfo Zeevaert, one of the enginers of the tower, was inside his office on the 25th floor. From that vantage point, he was able to witness the destruction taking place while several buildings collapsed and the dust cloud that followed, all the while feeling the movement inside the tower. It could arguably be said that it was the first time that a builder and designer of a tall building witnessed firsthand its behavior during a powerful earthquake.

The tower is now co-owned by its original builder La Latinoamericana, Seguros, Inmobiliaria Torre Latinoamericana, a real estate firm. In 2002 seven of the 44 floors were purchased by Telcel and Banco Inbursa, both firms controlled by Mexican businessman Carlos Slim.

In 2006, the tower celebrated its 50th anniversary. A ceremony was held on April 30, 2006, which included the reopening of the newly remodeled 37th to 44th floors, a site museum, and a fully remodeled Mirador, or observation deck, designed by Danish-born architect Palle Seiersen Frost. Also on that occasion were unveiled some recognitions granted by several architectural, engineering and communications institutions.

Plans for the tower include a facelift, which will remodel the building’s exteriors using new materials while maintaining the original design and look; since the tower is considered a historical monument, its exterior look cannot be altered.

Where is located Torre Latinoamericana?