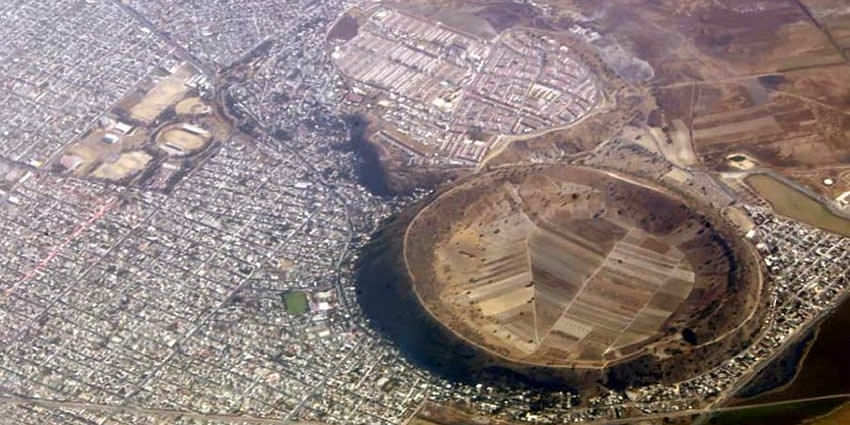 Xico (San Miguel Xico) is a city in the State of Mexico, Mexico. It serves as the municipal seat of Valle de Chalco municipality, with which it is, for all practical purposes, coterminous. The municipality lies adjacent to the east side of the Federal District (Distrito Federal) and is part of the Mexico City metropolitan area.

The city and municipality lie on the old lakebed of Lake Chalco, which was drained like much of the Basin of Mexico.

The city name comes from the nearby Xico hill (Cerro de Xico) and the name of the municipality comes from the old lake plus a reference to the “Programa Nacional de Solidaridad” (National Program of Solidarity) which was initiated here.

The municipality’s glyph and shield make reference to both names. It is a distinct entity from the city and municipality of Chalco, which is nearby. “Chalco” in both names refers to the Chalca tribe that were one of the original inhabitants of the area.

Early pre-Hispanic history refers to the area around the Cerro de Xico and the Island of Xico as most of the modern city was underwater until relatively recently. The area was mostly fishing villages from 900 BC to 100 AD. However, from 550 to 650, the area was dominated by the Teotihuacan culture. From 650 to 750, an Otomi settlement gained prominence.

The Acxotecas arrived around 1328, the same time that chinampa farming began here. Xico was conquered by the Aztec Tezozomoc in 1381, after which groups of Mexicas settle here extending the chinampa farming system in the 14th and 15th centuries.

The area was ceded to Hernán Cortés by the Spanish kind in 1529.

For a geologically significant chunk of time, the city and the surrounding area was underwater, drowned by Lake Chalco, just like much of the Mexico Basin. Lake Chalco along with Lakes Texcoco and Xochimilco were formed when lavas from the Chichinautzin volcanic field blocked river drainages to the south. During the 16th and 17th centuries following the Spanish conquest of Mexico, the lakes were largely drained in order to avoid periodic flooding.

The modern area began in the 19th century when Porfirio Díaz ordered the draining of Lake Chalco which devastated the economies of the former coastline communities.

The Mexican Revolution tried the compensate these communities by the creation of ejidos, the two largest here being Estación Xico with 507 hectares and San Miguel Xico with 250 hectares. These ejidos, as well as the present-day city and municipality, rest almost entirely on former lakebed.

For the most part, the area laid barren until the late 1970s, when the government drained the lake entirely resulting in the sudden influx of families coming from the central and southern parts of Mexico to occupy the newly found land. Corporate agriculturists and desperate landless peasants struck illegal or quasi-legal deals with the communal organizations and wrested control of the rich volcanic soil. Thousands and thousands of families poured into the region, hoping for work. Farmers climbed over the rim of the volcano and plowed fields inside the crater.

However, the area did not become a separate municipality until 1994.

The only notable sites in the area are The Cerro del Marqués which contains architecture and archeological remains but these are not open to the public. However, there is the Museo Comunitario (Community Museum) which displays local archeological finds located in the Casa de Cultura “Chalchiuhtlicue”.

There is also the Ex – Hacienda de Xico which was constructed at the same time the lake was drained.

Cerro de Xico or the “Hill of Xico” lies at the extreme southern end of Mexico City in the municipality of Xico within the Chichinautzin volcanic field. Cerro de Xico isn’t actually a hill – it’s a beautifully round tuff ring formed by phreatomagmatic eruptions through the middle of Lake Chalco, whose remains can be seen surrounding the crater rim. Being located just 40km south of the city center, the volcanic crater is slowly being engulfed by the ever advancing urban sprawl, even though the interior is still being used for agriculture naturally protected from the swarming city by the tuff ring.