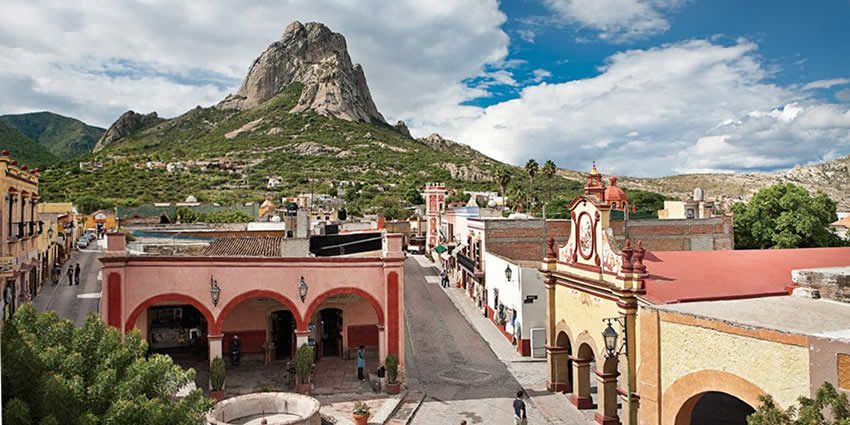 San Sebastián Bernal, better known as Bernal is a colonial village in the Mexican state of Querétaro. It was founded in 1642 by Spanish soldier Alonso Cabrera.

It has a current population of 2909. 1377 are males and 1532 are females. 1014 persons are counted as Economic Active Population and there are only 630 inhabited homes in town.

It is known for its enormous monolith of massive rock, the Peña de Bernal, the third highest on the planet.

Recently, the town of Bernal acquired the title of Pueblo Mágico (“Magical Town”). The Magical Towns are admitted for being localities that have magic symbolic attributes, legends, history, transcendental facts, that associate in each of his cultural manifestations, and that today mean a great opportunity for tourism.

Likewise, in the Otomi language: Ma’hando, in Chichimeca: De’hendo, has the same meaning: “In the middle of two”.

The current town of Bernal, was founded in 1647 by Lieutenant Alonso Cabrera, who moved, along with the first settlers of the town, the population of Cadereyta to build a population to protect the inhabitants of the area from the constant attacks of incursions Pames and Chichimecas, during much of the seventeenth and eighteenth centuries, Bernal was considered the southern boundary of the Gran Chichimeca, vast area formed by the north of the today states of Queretaro and Guanajuato and much of San Luis Potosi and Zacatecas, where ethnic groups Chichimecas, Pames and Jonaces, fought against the colonizers.

The choice of the place of the foundation was given to consider it safe and elevated, from where you could monitor the area, the first building was the barracks in which the soldiers were housed, later began to arrive more inhabitants who were building other buildings. The barracks was replaced by a more elaborate prison, and then the government building known today as the Casas Reales was built. Soon Bernal began to consolidate as a population and most of the buildings and colonial houses visible today were built, being one of the richest towns architecturally of the state.

In the year of 1725, it was given the rank of congregation with the name of San Sebastián Bernal, and the present church of three naves dedicated to San Sebastián, patron of the town since its foundation, whose celebration every January 20, is built. one of the main celebrations of the town at the moment.

An excellent way to enjoy Bernal is to walk its beautiful streets, visiting the first houses built during the seventeenth century. The Tourist Office offers two tours; the first one tells the history of the town and the geology of the rock; the second, narrates the foundation of Bernal and the procession of las Animas. The circuit of historical monuments is well known, such as the Castle of the XVII Century that has a large clock of German origin, placed to receive the arrival of the XIX century. Another very important construction is the Capilla de las Ánimas, built in the 18th century in honor of the souls in purgatory.

This viceregal-type property, built in the seventeenth century, is one of the most important in the political history of Bernal. In its front tower there is a beautiful clock of German origin, which was placed to commemorate the beginning of the 20th century.

Currently, this building houses the offices of the Municipal Delegation. Capilla de las Ánimas This chapel, also known as the Animitas, dates from the 18th century and was built in honor of all the souls of purgatory. Its attractive design is due to the small dimensions of its atrium and altar. It has an open-air theater and a park where visitors can take, in addition to a rest, magnificent photographs. Chapel of the Holy Cross The chapel dedicated to the Holy Cross, to which the Berlan people venerate with great devotion, was built between the 18th and 19th centuries.

The tradition marks that the pilgrims must reach the atrium on their knees under the sun, as payment of a heavenly debt. Temple of San Sebastián Mártir Its construction began in 1700 and ended in 1725. It does not have a defined style; However, in the bell tower you can see the hand of the indigenous artist. In addition, several stained glass windows worthy of admiration were recently placed.

The porphyrytic monolith was thought to have been formed 65 million years ago, during the Jurassic period. A recent chemical analysis by researchers at the National Autonomous University of Mexico has determined that it is considerably younger, likely formed about 8.7 million years ago.

Even though time passes by, it does not seem to affect its inhabitants, who actually live longer and who spend their days under the shelter of the third largest monolith in the world, which was formed 65 million years ago by the depleted force of volcanic lava.

This rock holds many mysteries. It is evident that it appears to be a highly attractive magnet, which must be seen at least once in a lifetime.

Many people perform a pilgrimage to the small chapel located at the highest point accessible through hiking.

Spring Equinox Festivity held from March 19 to 21 at the peña, where thousands of visitors gather to take charge of the energy emanating from the colossal monolith. In addition, an artistic and cultural program tending to stage pre-Hispanic rituals is presented.

Feast of the Holy Cross This feast takes place from May 1st to 5th; the villagers climb to the top of the rock, where they place a cross, which lasts all year. Likewise, a marathon and a contest of artisan masks are held; the winners are exhibited in the Mask Museum. Bernal’s main fair is dedicated to the patron saint of this town San Sebastián Mártir where it is celebrated with some processions and musical events from January 11 to 20.

It is located in Ezequiel Montes municipality, a few minutes from Colón and Cadereyta.