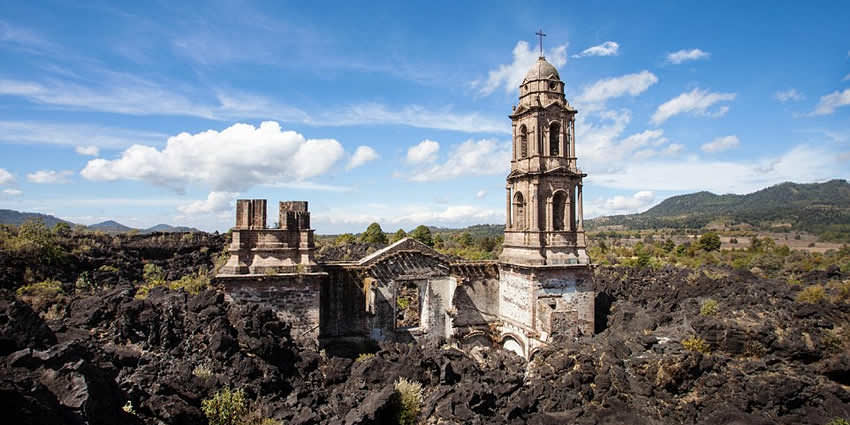 Nuevo San Juan Parangaricutiro, in the Mexican state of Michoacán, is a small village near the Parícutin volcano.

The city is called “Nuevo” (“New”) because the original San Juan Parangaricutiro was destroyed during the formation of the Parícutin volcano in 1943.

Nuevo San Juan Parangaricutiro is located about 8 kilometers (5.0 mi) west of Uruapan and 16-kilometer (9.9 mi) east of the peak of Parícutin in central Michoacán.

Like many places in Mexico, it is locally known by several unofficial names. “San Juan”, “Nuevo San Juan”, and “Parangaricutiro” are all variations.

This church is all that remains of the small village of San Juan Parangaricutiro in the state of Michoacán in Mexico.

The town was completely blanketed after the eruption of Volcán de Parícutin in 1943.

For the next eight years, lava flowed freely, burying the town underneath feet of volcanic rock – though its church survived unscathed.

The volcanic eruption was particularly unique as its entire evolution was observed and studied.

Many also consider this volcano, and adjacent lava-covered village, to be one of the natural wonders of the world.

Under the church, houses and other buildings remain buried, though thankfully no residents were injured during the extended eruption.