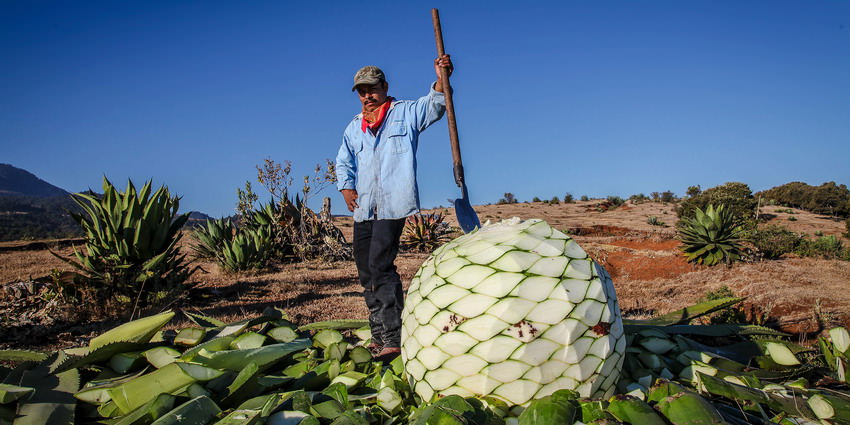 Mezcal (or mescal) is a distilled alcoholic beverage made from any type of agave. The word mezcal comes from Nahuatl mexcalli “metl” and “ixcalli” which means “oven-cooked agave”.

Agaves or magueys are found mainly in many parts of Mexico and all the way down to the equator, though most mezcal is made in Oaxaca. It can also be made in Durango, Guanajuato, Guerrero, San Luis Potosí, Tamaulipas, Zacatecas, Michoacan and the recently approved Puebla.

Today, mezcal is still made from the heart of the agave plant, called the piña, much the same way it was 200 years ago.

A saying attributed to Oaxaca regarding the drink is: “Para todo mal, mezcal, y para todo bien, también” (“For everything bad, mezcal, and for everything good as well”).

It is unclear whether distilled drinks were produced in Mexico before the Spanish Conquest. The Spaniards were introduced to native fermented drinks such as pulque, made from the maguey plant. Soon, the conquistadors began experimenting with the agave plant to find a way to make a distillable fermented mash. The result was mezcal. In Mexico, mezcal is generally consumed straight and has a strong smoky flavor.

The agave plant is part of the Agavaceae family, which has almost 200 subspecies. The mezcal agave has very large, thick leaves with points at the ends. When it is mature, it forms a “piña” or heart in the center from which juice is extracted to convert into mezcal. It takes between seven and fifteen years for the plant to mature, depending on the species and whether it is cultivated or wild. Agave fields are a common sight in the semi-desert areas of Oaxaca state and other parts of Mexico.

Mezcal is made from over 30 agave species, varietals, and subvarietals, in contrast with tequila, which is made only with blue agave. Of many agave species that can be used to make mezcal, seven are particularly notable.

here is no exhaustive list, as the regulations allow any agaves, provided that they are not used as the primary material in other governmental Denominations of Origin. Notably, this regulation means that mezcal cannot be made from blue agave. The term silvestre “wild” is sometimes found, but simply means that the agaves are wild (foraged, not cultivated); it is not a separate varietal.

In Mexico, mezcal is generally drunk straight, not mixed in a cocktail. Mezcal is generally not mixed with any other liquids, but is often accompanied with sliced oranges, lemon or lime sprinkled with a mixture of ground fried larvae, ground chili peppers, and salt called sal de gusano, which literally translates as “worm salt”.

The agave was one of the most sacred plants in pre-Spanish Mexico, and had a privileged position in religious rituals, mythology and the economy. Cooking of the “piña” or heart of the agave and fermenting its juice was practiced.

The origin of this drink has a myth. It is said that a lightning bolt struck an agave plant, cooking and opening it, releasing its juice. For this reason, the liquid is called the “elixir of the gods”.

However, it is not certain whether the native people of Mexico had any distilled liquors prior to the Spanish Conquest.

Upon introduction, these liquors were called aguardiente (literally fire water or fiery water). The Spanish had known distillation processes since the eighth century and had been used to drinking hard liquor. They brought a supply with them from Europe, but when this ran out, they began to look for a substitute. They had been introduced to pulque and other drinks based on the agave or agave plant, so they began experimenting to find a way to make a product with a higher alcohol content. The result is mezcal.

Sugarcane and grapes, key ingredients for beverage alcohol, were two of the earliest crops introduced into the New World, but their use as source stocks for distillation was opposed by the Spanish Crown, fearing unrest from producers at home. Still requiring a source of tax revenue, alcohol manufactured from local raw materials such as agave was encouraged instead.

The drinking of alcoholic beverages such as pulque was strongly restricted in the pre-Hispanic period. Taboos against drinking to excess fell away after the conquest, resulting in problems with public drunkenness and disorder. This conflicted with the government’s need for the tax revenue generated by sales, leading to long intervals promoting manufacturing and consumption, punctuated by brief periods of severe restrictions and outright prohibition.

Traditionally, mezcal is handcrafted by small-scale producers. A village can contain dozens of production houses, called fábricas or palenques, each using methods that have been passed down from generation to generation, some using the same techniques practiced 200 years ago.

The process begins by harvesting the plants, which can weigh 40 kg each, extracting the piña, or heart, by cutting off the plant’s leaves and roots. The piñas are then cooked for about three days, often in pit ovens, which are earthen mounds over pits of hot rocks. This underground roasting gives mezcal its intense and distinctive smoky flavor. They are then crushed and mashed (traditionally by a stone wheel turned by a horse) and then left to ferment in large vats or barrels with water added.

The mash is allowed to ferment, the resulting liquid collected and distilled in either clay or copper pots which will further modify the flavor of the final product. The distilled product is then bottled and sold. Unaged mezcal is referred to as joven, or young.

Some of the distilled product is left to age in barrels between one month and four years, but some can be aged for as long as 12 years. Mezcal can reach an alcohol content of 55%. Like tequila, mezcal is distilled twice. The first distillation is known as punta, and comes out at around 75 proof (37.5% alcohol by volume). The liquid must then be distilled a second time to raise the alcohol percentage.

Mezcal is highly varied, depending on the species of agave used, the fruits and herbs added during fermentation and the distillation process employed, creating subtypes with names such as de gusano, tobalá, pechuga, blanco, minero, cedrón, de alacran, creme de café and more.

A special recipe for a specific mezcal type known as pechuga uses cinnamon, apple, plums, cloves, and other spices that is then distilled through chicken, duck, or turkey breast. It is made when the specific fruits used in the recipe are available, usually during November or December.

Other variations flavor the mash with cinnamon, pineapple slices, red bananas, and sugar, each imparting a particular character to the mezcal. Most mezcal, however, is left untouched, allowing the flavors of the agave used to come forward.

The two types of mezcal are those made of 100% agave and those mixed with other ingredients, with at least 80% agave. Both types have four categories. White mezcal is clear and hardly aged.

Dorado (golden) is not aged but a coloring agent is added. This is more often done with a mixed mezcal.

Reposado or añejado (aged) is placed in wood barrels from two to nine months. This can be done with 100% agave or mixed mezcals. Añejo is aged in barrels for a minimum of 12 months. The best of this type are generally aged from 18 months to three years. If the añejo is of 100% agave, it is usually aged for about four years.

The state of Oaxaca sponsors the International Mezcal Festival every year in the capital city, Oaxaca de Juárez.

There, locals and tourists can sample and buy a large variety of mezcals made in the state. Mezcals from other states, such as Guerrero, Guanajuato, and Zacatecas also participate.

This festival was started in 1997 to accompany the yearly Guelaguetza festival. In 2009, the festival had over 50,000 visitors, and brought in 4 million pesos to the economy.