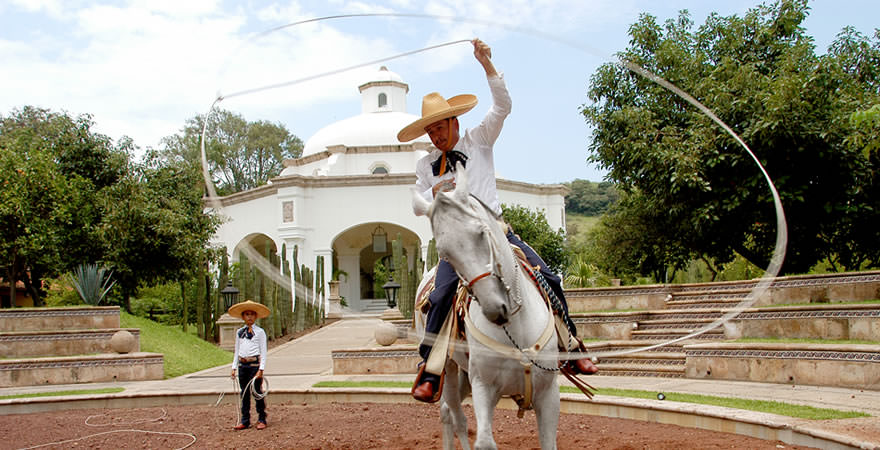 The charreada or charrería is a competitive event similar to a rodeo and was developed from animal husbandry practices used on the haciendas of old Mexico. The sport has been described as “living history,” or as an art form drawn from the demands of working life.

In 2016, charrería was inscribed in the Representative List of the Intangible Cultural Heritage of Humanity by UNESCO.

Evolving from the traditions brought from Spain in the 16th century, the first charreadas were ranch work competitions between haciendas. The modern Charreada developed after the Mexican Revolution when charro traditions were disappearing.

The charreada consists of nine events for men plus one for women, all of which involve horses, cattle, or both.

Some of the events in the charreada have been criticized by animal advocacy groups and some states have banned certain events. However, there is an absence of independent statistical data and unbiased recording of the injury rate of animals has not been undertaken.

Charrería, a word encompassing all aspects of the art, evolved from the traditions that came to Mexico from Salamanca, Spain in the 16th century.

When the Spanish first settled in Colonial Mexico, they were under orders to raise horses, but not to allow Native Americans to ride.

However, by 1528 the Spanish had very large cattle-raising estates and found it necessary to employ indigenous people as vaqueros or herdsmen, who soon became excellent horsemen. Smaller landholders, known as rancheros or ranchers, were the first genuine charros and they are credited as the inventors of the charreada.

Prior to the Mexican Revolution, ranch work competitions were generally between haciendas.

Before World War I, there was little difference between rodeo and charreada. Athletes from the United States, Mexico, and Canada competed in all three countries. Subsequently, charreada was formalized as an amateur team sport and the international competitions ceased.

Following the breakup of the haciendas by the Mexican Revolution, the charros saw their traditions slipping away. They met in 1921 and formed the Asociación Nacional de Charros to keep the charrería tradition alive.

The advent of Mexican cinema brought greater popularity, especially musicals that combined ranchers with the charro image, akin to the Western and “singing cowboy” genres in the United States.

Mexican Americans in the United States also held various charreadas during the same period, but in the 1970s, the Federación Mexicana de Charrería (FMCH) began assisting them in establishing official charreadas north of the border.

They are now quite common. At times, US champion teams compete in the national competition in Mexico.

The participants in the charreada wear traditional charro clothing, including a closely fitted suit, chaps, boots, and a wide-brim sombrero.

The body-fitting suit of the charro, while decorative, is also practical; it fits closely to insure there is no flapping cloth to be caught by the horns of steers. The botinas, or little boots, prevent feet from slipping through the stirrups.

Spurs are worn on the botinas.

The saddle of the charro has a wider horn than that of a western saddle, which helps safeguard the charro from being pitched off and from being hung up. There are two grips at the back of the saddle, in case the charro needs to hold on because of a buck or some other unexpected act of the horse.

A charreada is held within a marked-off area of an arena called a Lienzo charro consisting of a lane 12 meters wide by 60 meters long leading into a circle 40 meters in diameter.

In the opening ceremony, organizations and participants parade into the arena on horseback, usually accompanied by a mariachi band playing Marcha Zacatecas. This signifies the long tradition of Charros being an auxiliary arm of the Mexican Army. The short charro jacket is reminiscent of that worn by members of Villa’s Army.

The charreada itself consists of nine scoring events staged in a particular order for men. Unlike rodeos, most charreadas do not award money to the winners as charreadas are considered an amateur, rather than professional sport. Prizes may take the form of trophies.

Unlike American rodeo, events are not timed but judged and scored based on finesse and grace. Charreada historically enjoys greater prestige in Mexico than in the United States.

Until recently, the charreada was confined to men but a women’s precision equestrian event called the escaramuza is now the tenth and final event in a charreada. The event involves women’s teams dressed in a style reminiscent of the nineteenth century, participating in precisely choreographed patterns for horses.

The immediate antecedent of the present Escaramuzas were the Adelitas, or “women of the revolution.”

Tradition holds that women on horseback were decoys during the Mexican revolution. The women would ride off to raise a cloud of dust so that the Federales were deceived into thinking an attack would come from that direction.

The revolutionaries would then attack from the rear.

The women in the escaramuza are mounted “a mujeriegas”, that is, in an “albarda” or sidesaddle that is peculiar in style to the Charrería but the underlying design has also evolved over hundreds of years in both Europe and North Africa.

The traditional albarda for the Escaramuza is a cut-down charro saddle, with a leather seat and leg braces, U-shaped for the right leg and C-shaped for the left leg.

The charreada itself consists of a number of scoring events staged in a particular order—nine for the men and one for the women. Two or more teams, called associations, compete against each other. Teams can compete to become state, regional, and national champions. The competitors are judged by both style and execution.

Unlike rodeos, most charreadas do not award money to the winners as charreadas are considered an amateur sport, not professional. Under Mexican laws, it would be illegal to receive a monetary reward for participating in a charreada.

At times there are such prizes as saddles or horse trailers.

Cala de Caballo (Reining); Literally the demonstration of the horse rein, the horse is required to show its talents in the canter, gallop, slide stop, spins on its hind legs as well as backing. Is one of the hardest events to master and also the most elaborately scored, it is possible to score more negative points than positive ones.

Piales en Lienzo (Heeling); a horseman must throw a lariat, and let a horse run through the loop, catching it by the hind legs. Three opportunities are given. Points are awarded for the distance needed to stop the mare. This is done in the rectangular portion of the arena;

Colas en el Lienzo, or Coleadero (Steer Tailing) similar to bulldogging except that the rider does not dismount; the charro rides alongside the left side of the bull, wraps its tail around his right leg, and tries to bring the bull down in a roll as he rides past it. Points are given for technique, time, and roll of the bull.

Jineteo de Toro (Bull riding) is similar to the rodeo event. Bulls are smaller, between 990 and 1320 pounds, and are ridden until they stop bucking. Two hands can be used on the bull rope. Points are given for technique.

The charro cannot fall off, he must dismount and land upright. After the charro dismounts the bull he must remove the bull rope and bellrope so the Terna en el Ruedo can follow. This event has its roots in an earlier form known as Jaripeo.

Terna en el Ruedo (Team Roping); is a team roping event in which three charros attempt to rope a bull – one by its neck, one by its hind legs, and the last then ties its feet together. They have a maximum of 6 minutes. Points are awarded for rope tricks and time.

Manganas a Pie (Forefooting) a charro on foot (pie) has three opportunities to rope a horse by its front legs and cause it to fall and roll once. The horse, usually a mare, is chased around the ring by three mounted charros or hazers.

Points are awarded for time and rope tricks as long as the horse is roped and brought down. Extra points are given for the tirón del ahorcado (hanged pull) in which the rope is around the charro’s neck, like a noose, and he uses his body to cause the mare to fall and roll.

Points for all three attempts are cumulative. Eight minutes are given.

Manganas a Caballo or (Forefooting on Horseback); a charro on horseback has three opportunities to rope a horse by its front legs. In the USA, the horses are not rolled, they are released as soon as they are roped.

But elsewhere, the goal is to have the horse fall and roll once. The horse is chased around the ring by three mounted charros. Points are awarded for time and rope tricks as long as the horse is roped according to the national rules.

Points for all three attempts are cumulative. Eight minutes are given.

The most dangerous part of this is if the charro performing the pass falls under three other mounted charros that are chasing the loose horse round the arena ring. This is done backward at times for the show.

Escaramuza (English: “skirmish”) is an event added in 1992 for teams of women who perform precision equestrian displays riding sidesaddle and garbed in Adelita dress. It is usually held between the Coleadero and the Jineteo de Toro.