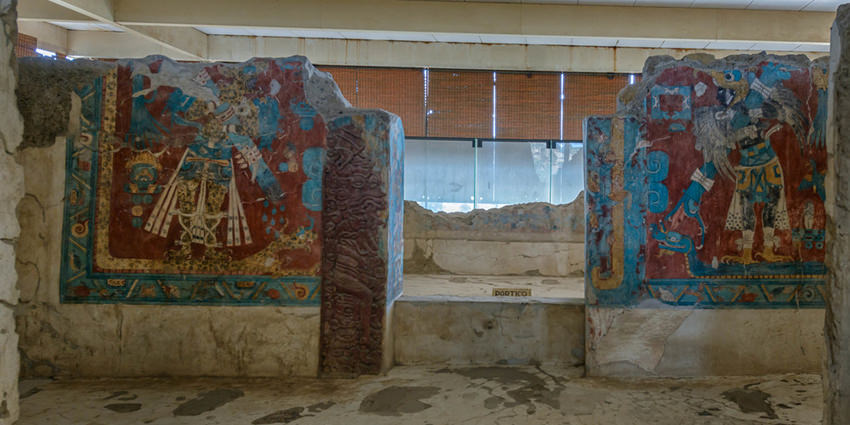 Cacaxtla is an archaeological site located near the southern border of the Mexican state of Tlaxcala.

It was a sprawling palace containing vibrantly colored murals painted in unmistakable Maya style.
The nearby site of Xochitecatl was a more public ceremonial complex associated with Cacaxtla.

Cacaxtla and Xochitecatl prospered 650-900 CE, probably controlling important trade routes through the region with an enclave population of no more than 10,000 people.

Cacaxtla was the capital of region inhabited by the Olmeca-Xicalanca people. The origins of the Olmeca-Xicalanca are not known with certainty, but they are assumed to come from the Gulf coast region, and were perhaps Maya settlers who arrived in this part of central Mexico around 400 CE.

The term “Olmeca-Xicalanca” was first mentioned by Tlaxcalan historian Diego Muñoz Camargo at the end of the 16th century. This historian described Cacaxtla as the principal settlement of the “Olmeca”, although what we today refer to as the Olmec culture ended ~400 BCE, that is, almost 800 years earlier.

After the fall of the nearby city Cholula (ca. 650 – 750) — in which the Cacaxtlecas might have been involved — Cacaxtla became the hegemonic power in this part of the Tlaxcala–Puebla valley. Warriors from Cacaxtla appear to have taken over Cholula for a time, but they were ultimately expelled by the Toltecs. Its ascendancy came to an end around 900 CE and, by 1000, the city had been abandoned.

Modern history of the site

The site was rediscovered in 1974 by looters, but quickly came to the attention of archaeologists that same year. Archaeologists Eduardo Merlo Juárez, Diana Lopez-Sotomayor and Daniel Molina-Feal dedicated over six years of their life excavating the site.

The first work to be done in the area consisted on clearing the original tunnel opened by the looters, Archeologist Diana Lopez-Sotomayor, later appointed project manager, recalled her first view of the life-sized characters depicted in the murals as an overwhelming experience.

As further figures appeared on the mural, the area of excavation had to be enlarged and several constructive stages were discovered.

The first area to be excavated was the main mural, known as the “Gran Basamento”, and the immediate purpose of the work was to protect and secure the murals and other structures from the weather and looters.

The centre of the city of Cacaxtla was the 200-metre-long, 25-metre-high Gran Basamento – a natural platform offering a fine defensive position and commanding views over the surrounding terrain.

The city’s main religious and civil buildings were located on this platform, as were the residences of the priest class. Several other smaller pyramids and temple bases stand in the vicinity of the main platform.

Because Cacaxtla’s main basamento was not excavated until the 1980s, many of the original coloured wall decorations have been preserved and can be appreciated in situ by visitors to the site.

Of particular interest is the fact that most of the murals seem to combine the symbology of Altiplano cultures with influences from the Maya, making Cacaxtla unique in this regard.

The most famous of Cacaxtla’s preserved paintings is the “Battle Mural”, or Mural de la batalla, located in the northern plaza of the basamento. Dating from prior to 700, it is placed on the sloping limestone wall of a temple base and is split in two by a central staircase. It depicts two groups of warriors locked in battle: on the one side are jaguar warriors, armed with spears, obsidian knives, and round shields, who are locked in battle with an army of bird warriors (some of whom are shown naked and in various stages of dismemberment).

Cacaxtla conserves the oldest mural painting featuring a human figure and symbols from other cultures (Teotihuacan, Maya, Mixtec and Totonac). These paintings portray the bird man and the feline man, possibly ruler – priests of the Olmecs Xicalancas who inhabited Cacaxtla between the years 600 and 900 AD. The bird man is associated with Quetzalcoatl, the generous deity who taught people the arts and agriculture. The feline man is associated with the rains that fertilize the earth.

The Venus Temple that is also located underneath the roof contains two murals on two columns of two figures. On the right column, there is a male figure with a mask covering his face. He wears a skirt with the Venus symbol on the front and has a scorpion tail. On the left, a fragment of the other figure is visible, probably representing a woman with a skirt also bearing a Venus symbol. The presence of Venus on the garments of the figures and their representation around both of them indicate that the murals allude to some astronomical phenomenon or calendrical data associated with the planet Venus, which at that time was related to warfare and sacrifice.

The Mural del Templo Rojo is located at the Governors’ Room (Las Habitactiones de los Gobernantes). It is located in the staircase leading to the room, and only one side is visible to the public. The other side of the staircase is not facing a public walkway, but is displayed as a reproduction in the corresponding museum building.

The archaeological site is maintained by the government’s National Institute of Anthropology and History (INAH) and is open Tuesday to Sunday, from 8:00 to 17:30.

The admission is 65 MXN on weekdays, and free on Sunday for Mexican Nationals.
Permission to record videos costs another $50 MXN while photography is free.