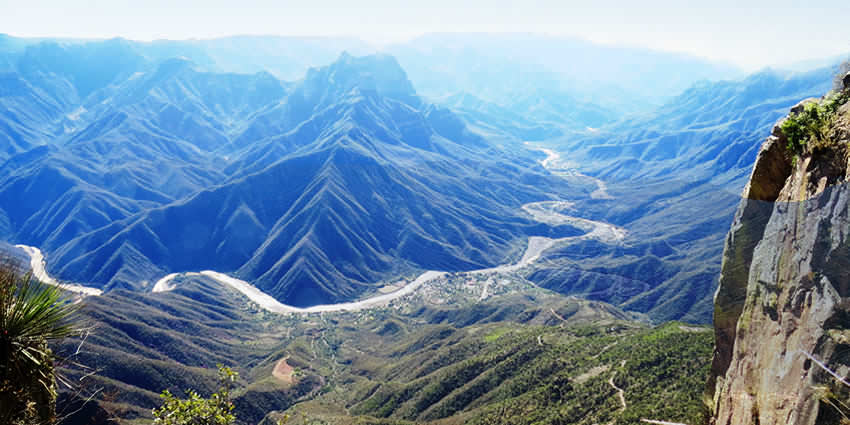 Copper Canyon (“Barrancas del Cobre”) is a group of six distinct canyons in the Sierra Madre Occidental in the southwestern part of the state of Chihuahua in northwestern Mexico.

The canyons were formed by six rivers that drain the western side of the Sierra Tarahumara (a part of the Sierra Madre Occidental).

All six rivers merge into the Rio Fuerte and empty into the Gulf of California.

The walls of the canyon are a copper/green color, which is where the name originates.

The New Spanish arrived in the Copper Canyon area in the 17th century and encountered the indigenous locals throughout Chihuahua. For the New Spanish, America was a new land to explore for gold and silver and also to spread Christianity.

The New Spanish named the people they encountered “Tarahumara”, derived from the word Rarámuri, which is what the indigenous people call their men. Some scholars theorize that this word may mean ‘The running people’.

During the 17th century, silver was discovered by the Hispanic in the land of the Tarahumara tribe. Some were enslaved for mining efforts. There were small uprisings by the Tarahumara, but to little avail. They eventually were forced off the more desirable lands and up into the canyon cliffs.

The alpine climate of the mountainous regions of Copper Canyon has moderate temperatures from October to November and March to April.

The bottom of the canyons are humid and warm and remain that way throughout the year.

During the warmest months, April through June, drought is a chronic problem with little rainfall until July when the rainy season begins.

The Sierra Tarahumara Occidental region contains numerous species of pine and oak trees. Mexican Douglas-fir (Pseudotsuga lindleyana) trees cover the high plateaus in altitudes over 8,000 feet (2,400 m), but due to deforestation in the area, many species of wildlife are endangered.

Cougars live in the remotest of regions and are rarely seen.

After the summer rainy season these upper regions blossom with wildflowers until October.

From 4,000–8,000 feet (1,200–2,400 m), oak trees grow in the huge forests as well as the more shade-tolerant types of trees.
In the fall the forests become brilliant with color from Andean alder (Alnus acuminata) and poplar (Populus spp.) trees.
Brushwood and scrubby trees grow on the canyon slopes, which can accommodate the dry season. Huge fig (Ficus spp.) and palm trees thrive at the bottom where water is plentiful and the climate is tropical.

Threats to the ecosystem

Due to increases in human population, there are many threats to the ecosystems of the Sierra Tarahumara Occidental region.

The government funding to build a “tourist friendly” atmosphere poses threats to the environment and indigenous cultures.

Roads have been built in the former isolated mountainous zones.

Agriculture and grazing as well as the cutting of hardwoods and other trees for firewood has accelerated a soil erosion problem.

Mesquite (Prosopis spp.) and desert ironwood (Olneya tesota) trees are cut and exported primarily to the U.S. for charcoal.
Amapa (Tabebuia chrysantha) trees yield highly prized lumber for building and furniture making.
Other trees are also cut and sold for their high-priced lumber.

Over harvesting of the forests in the area has caused the extinction of the imperial woodpecker and Mexican wolf.

However, a massive forest-harvesting project in the region has been abandoned, for now, by the World Bank.

The Mexican forestry department deemed these species of trees “legally protected,” but enforcement is difficult.

The government has taken measures to halt or slow down the cultivation of opium poppies and cannabis by spraying crops with herbicides, which threaten the populations of many different species.

A large saturnid moth, Rothschildia cincta, are one of the species that are threatened by the spraying. Their cocoons are used by the native population for ceremonial purposes.

Open-pit mining for copper, gold and other metals not only produces air pollution from smelters, but has been linked to the serious decline of the Tarahumara frog (Rana tarahumarae).

Every river system has been dammed causing fresh water shortages in nearby desert communities.

An enormous dam is being constructed on the Rio Fuerte, which poses major environmental problems and may lead to massive losses of tropical forest and habitats.

Conservation is underway, but remains informal and slow. Mexico has environmental laws, but suffers from lack of financial resources. Enforcement has been lax or non-existent.
Agencies are actively trying to increase the protection for natural preserves.

Copper Canyon traditional inhabitants are the Tarahumara or Rarámuri.

With no official census, the population of the Rarámuri people probably ranges between 35,000 and 70,000.

Many Rarámuri reside in the cooler, mountainous regions during the hot summer months and migrate deeper into the canyons in the cooler winter months, where the climate is more temperate.

Their survival strategies have been to occupy areas that are too remote for city people, way off-the-beaten-path, to remain isolated and independent, so as to avoid losing their culture.

Their diet is largely domestic agrarian, but does consist of meat from domesticated cows, chickens and goats, wild game, and freshwater fish. Corn (maize) is the most important staple of the Rarámuri’s diet.

The Rarámuri people are known for their endurance running. Living in the canyons, they travel great vertical distances, which they often do by running nonstop for hours.

A popular Rarámuri community race called rarajipari, is played by kicking a wooden ball along the paths of the steep canyons.

Tourism is a growing industry for Copper Canyon, but the acceptance of it is debated in the local communities.

Some communities accept government funding for building roads, restaurants and lodging to make the area attractive for tourists.

Many other groups of Rarámuri maintain their independence by living in areas that are as far away from city life as possible. Their way of life is protected by the mountainous landscape.

There are many other ways to explore Copper Canyon such as hiking, biking, driving or horseback riding.

The most popular way is by train, as the Ferrocarril Chihuahua al Pacífico or ChePe, runs along the main canyon called Canyon Urique, between Chihuahua and Los Mochis, on the Gulf of California.

The Chihuahua al Pacifico began in the late 19th century.

The revolution, lack of funding, and the overall difficulty of building a railroad over such terrain hindered its completion until 1961.

The railroad comprises 405 miles of rails with 39 bridges and 86 tunnels. The total trip takes approximately 15 hours and passes through towns, as well as the towering cliffs of the canyons.

Along the railway, many Tarahumarans lay out their food, crafts and other wares for sale.

The park is located in the municipalities of Batopilas, Bocoyna, Guachochi, and Urique.

Among the villages located in or on the Copper Canyon are:

Copper Canyon was featured on Season 1 Episode 12, of Man vs. Wild on the Discovery Channel, on Raramuri Tale, a short film about a Raramuri boy, his mother and the teachings of the Tarahumaras, in the Film The Three Burials of Melquiades Estrada, and in an animated series called Max Steel on Disney XD.

Copper Canyon was also a destination in Motorcycle Mania 3, a feature that aired on the Discovery Channel.

In the Sierra Madre, a book by Jeff Biggers, looks at a Tarahumara village in the Copper Canyon.

The nonfiction book Born to Run by Christopher McDougall, chronicling the story of ultra-runner Micah True in the Copper Canyon with the Tarahumara Indians, who taught him a better way to run.

True was the race director of the Copper Canyon Ultra Marathon, which ends in Urique’s plaza.
The race covers 50 miles (80 km) of single track trail and dirt road.