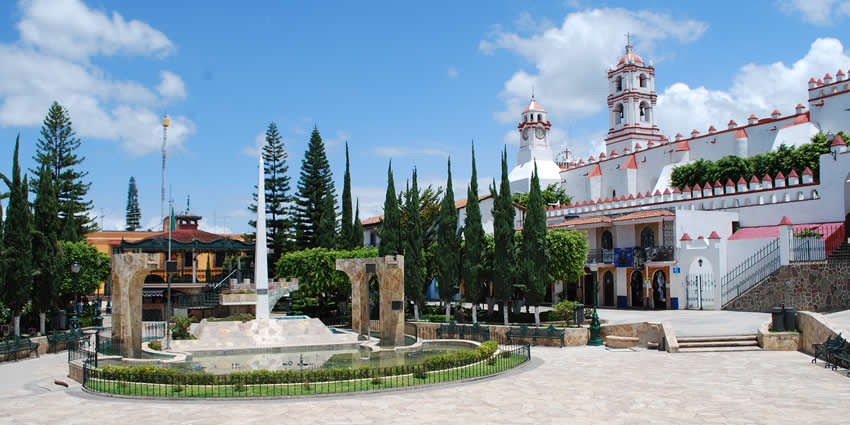 Ixtapan de la Sal is a town and municipality located in the State of Mexico, Mexico. It is 60 km south of Toluca, the state capital.

The climate in Ixtapan de la Sal is predominately cool, semi-arid with rains in the summer. It has an average temperature of 17.9 °C (64 °F) and a low of 1 °C (34 °F) which results in a comfortable place for health and for relaxing.

In the year 1394, a group of indigenous people came from the Pacific coast. They wanted to get to Tenochtitlan in order to attend the crowning of the emperor. On their way to their destination, these Pacific people established in Ixtapan de la Sal where they formed communities. Here they noticed that once the geothermally heated water was evaporated naturally in the sunlight, salt was formed. This amazed them because back then, salt was a very precious item. When the emperor found out about this discovery, he also ordered men and women to move there, which led to the foundation of Ixtapan de la Sal.

At the time of the Spanish conquest, Hernán Cortés sent Andrés de Tapia to conquer Ixtapan de la Sal. The first priest who came to Ixtapan was Juan Guichen de Leyva. Evangelization was carried out by Franciscans who came here after 1543. Tradition states that 13 monks came to Ixtapan de la Sal to convert the Indians by associating Christ with the local deity associated with storms.

In 1822, Ixtapan de la Sal became a municipality of the state of Mexico. In 1825, the first elections to select the municipal council took place on Sunday December 3 of the same year. On August 9 and 10, 1912, the population of Ixtapan de la Sal was attacked by “pseudo–Zapatistas”, who are followers of Zapata’s ideology. The invaders were led by Andres Ruiz and Francisco B. Pacheco. On August 1, 1918, by council’s agreement, local mourning was declared for every year’s August 10.

Two rivers pass through Ixtapan de la Sal. They are “El Rio Salado” from the east with a year-round current, and “El Rio Salitre” from the northwest with a seasonal current.

Also an aqueduct passes through the city.

But the most relevant part for tourists is the carbonated water of “La Laguna Verde,” a spring which filters from the subsoil sprouting naturally in form of water eruptions.

In 1996, it was integrated to the program of the “100 Colonial Cities”, which is a touristic program that gathers the oldest as well as the most important Mexican cities.

The city of Ixtapan de la Sal has as its primary economic activity the tourism generated by the thermal springs that are found here. It is considered to be one of the primary tourist destinations in the State of Mexico. Many internationally-known hotel chains have locations here, most often placed on or right next to a thermal spring.

It is also the home of the Parque Acuático Ixtapan, a water park with thermal spring spa, a children’s area, a family area and an area dedicated to “extreme” water rides. The park also has an expanse of green area with a small train that tours it.

Fifteen kilometers to the south of the city are located the Grutas de la Estrella. These are caverns that have been formed by the dissolving of limestone by groundwater that seeps from the Chontalcuatlan and San Jeronimo rivers. These caverns are filled with stalactites and stalagmites of various colors.

On the second Friday of Lent the annual religious celebration in honor to the Lord of Forgiveness is celebrated.

On August 15, a religious festival in honor of the Assumption of Mary takes place.

For nine days after the passing of a loved one, prayers are offered for the deceased. On the ninth day, a wooden cross that has been laid on the ground is raised upright and carried to the tomb to be placed there permanently. Another tradition that is practiced in Ixtapan is the “Sunday open-air market”, which is a market placed in the same place every Sunday. In it, people practice “El trueque” (bartering).

The traditional band is the “Banda del Viento” (the wind band), which still persists. Its members play musical instruments without formal music studies. Also, a weekly fountain performance, complete with music and lights, is where you will commonly find a majority of Ixapans youth, couples, and family fun. The fountain is located at the Plaza under the church.

The principal handcrafts are pottery, carved wood and confectionery and also the production of pipían pumpkin candy in October and November. The most prominent are the wooden copalillo and pottery.