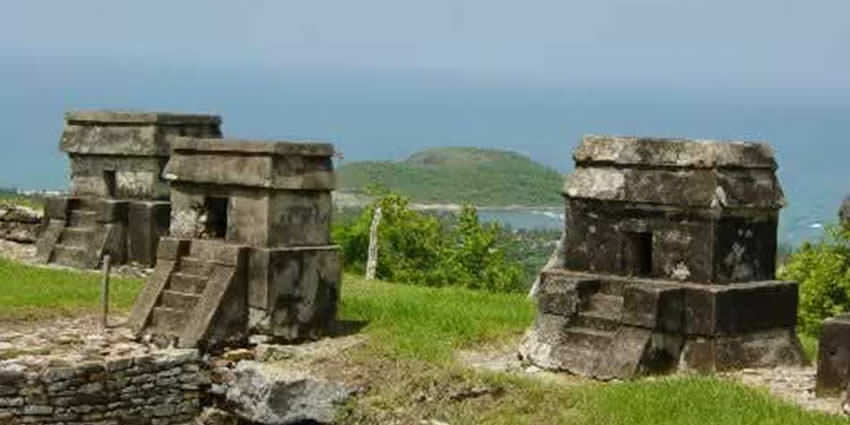 El Zapotal is a Totonac culture archaeological site, located in the region known as Mixtequilla, between the Blanco and Papaloapan rivers in the Ignacio de la llave Municipality in the Veracruz State, Mexico.

Its finding has great significance for the understanding of ancient cultures of Veracruz and Mexico.
It is considered that site was inhabited by the Totonac culture, grandiose pottery pieces were found, among these figures is the Mictlantecuhtli sculpture, God of death.

The various sculptures were accompanied by an ossuary composed of hundreds of ceramic figures, among them are the so-called smiling faces and a set of women with naked torso, these were called “The ladies of the Earth”, as representations of Cihuateotl figurines.

El Zapotal is currently located on an ancient totonac city in ruins, which flourished in 600 to 900 CE, in what archaeologists call the “classical” period.

The “Totonac”‘ are a native Mesoamerican culture of the Veracruz region. Formed a Confederation of cities; but toward the early 16th century were under the Aztec domain. Its economy was agricultural and commercial and had large urban centers.

The Totonac culture (translated by some as “three hearts”, in reference to the three centers which form this culture) stands out for the very varied ceramics, stone sculptures, monumental architecture and advanced urban city conception.

In 1519 a meeting between 30 Totonac cities was held in the city of Cempoala. This would forever seal their fate and that of all Mesoamerican Nations. This was an alliance established with the Spaniards, to march together to the conquest of Tenochtitlan. The Totonac voluntarily contributed 13,000 warriors to the task, to accompany some 500 Spaniards. The Totonaca reasoning was that the Spaniards would free them from the Aztec yoke, but once the Aztec empire was successfully defeat, the Totonacs, including those of Cempoala, were subjected to the Spanish empire, and then evangelized and partly cultured, first by the new Spanish “virreinal” authorities and then by Mexicans.

The Totonacs developed in the central part of Veracruz, towards the late mesoamericano classical period, their occupational area reached the southern basin of the Papaloapan river, to the west the municipalities of Acatlán de Perez Figueroa, Oaxaca, Chalchicomula, Puebla, Perote Valley, the Puebla sierra, Papantla and the Cazones river lowlands. The totonaca culture apogee was reached during the mesoamericano classical period, when ceremonial centers such as El Tajín, Yohualichán, Nepatecuhtlán, Las Higueras, Nopiloa, and Zapotal were built.

Their development and perfection achieved is remarkable, in developing yokes, palms, axes, snakes, smiling caritas and monumental clay sculptures. Apparently, the Totonaca formed part of the Tula Empire and since 1450 were conquered by the Triple Alliance (Mexico) nahuas and joined their troops.

Although the family is traditionally divided into two languages, Totonac and Tepehua, the various dialects thereof are not always mutually intelligible and thus Totonac and Tepehua are better characterized as families in themselves. The following classification is the one made by the Ethnologue, although some of these groups can probably be seen as forming subgroups of their own. Standard terminology is used for the dialects that the Ethnologue names differently from published scholarly works, e.g. “Upper Necaxa Totonac” instead of “Totonac of Patla-Chicontla”.

Like many native Mexican languages, the totonacan languages have slowly been replaced by Spanish. However, the totonacan misanteca variety is in greater danger of disappearing. Other languages are still spoken in several communities in the States of Puebla, Veracruz, Hidalgo and San Luis Potosí.

Discovered in 1971, with one of the most beautiful and impressive ceramic prehispanic sculptures. The site was occupied by Totonac. The discovery included several human burials with clay figures offerings, included was a group of women with naked torso, identified as representations of the lady of the land: Cihuatéotl, today are exhibited in the Jalapa Anthropology Museum.

Information was available about great figures of women and goddesses modeled in clay in the vicinity of the Laguna de Alvarado, in the municipality of Ignacio de la Llave, Veracruz. It was known that this region was very rich in archaeological remains.

El Zapotal is a great Totonac site whose apogee seems to have occurred at the end of the late classical and early postclassical period. Although it contains many buildings, (as is typical in Mexico) only a few have been explored.

There is an ossuary and many ceramic objects, some with excellent hand craft. Among these, there is a beautiful ceramic sculpture found in the walls of one of the buildings. This piece was an integral part of that building decoration and was made with uncooked clay.

It is thought that it corresponds to a shrine dedicated to the Death God, there were many offerings of clay figures, as well as nearly a hundred individuals, constituting the more complex and lavish funerary ritual known.

The offerings cover several stratigraphic layers, it is estimated that it was dedicated to the Lord of the dead, whose image, also modeled in clay, was uncooked. The God, that nahuatl speakers called Mictlantecuhtli is sitting on a lavish throne, whose back is integrated into the enormous headgear worn, there are human skulls sideways, heads of lizards and fantastic Jaguars.

It is a beautiful image of Mictlantecuhtli, the Death God, represented as an emaciated person.

The Death Lord is a God that represents the essence of life and death, hence it is a deity representing an intermediate state: a living dead. The body is emaciated, as its torso, arms and head with exposed some joints, bones, ribs and skull exposed. It is believed that the material with which the eyes were made depicted an alive look, in addition, its tongue hangs out, symbol of the dark underworld; the mocking expression displays the aesthetic sensitivity of Mesoamerican thought.

Fear of death and beauty mingle when this figure, incredible testimony of the prehispanic past is seen for the first time. It is located at a side of the sanctuary, the side walls were decorated with priests processions scenes on a red background, with the figure of the God, its throne, and headdress; some segments painted the same color are preserved.

Because of its quality, it is considered one of the most outstanding Mesoamerican cultural manifestations because all are elaborated with clay, together constitute a unique artistic style, most of the pieces found are in the Jalapa anthropology and history Museum, “The Lord of death” (Mitlantecuhtli), is located in the Zapotal Site Museum.

Because of its fragility, the sculpture was keep on site, a site Museum was founded.

Mictlantecuhtli (also Mictlantecuhtzi, o Tzontémoc): death lord and Lord of Mictlán, also the northern god, one of those holding heaven.

“‘Mictlantecuhtli”‘ (Nahuatl word meaning (tecuh-tli) Lord of the underworld (Mictlán)) is an Aztec, Zapotec and Mixtec underworld God and of the dead (not the Catholic concept of hell), was also called Popocatzin (from “popoca” ‘smoking’), was therefore the God of the shadows. Together with his wife Mictecacihuatl, governed the underworld or Mictlan Kingdom. Exercised sovereignty over the “nine underground rivers” and on the souls of the dead. He is depicted as a human skeleton with a skull with many teeth. Associated with spiders, bats and owls, when drawn was represented with black hair and stellar (star) eyes.

The Sculpture on the right was found in the Eagle warrior House, in a sacred place of the Templo Mayor of Mexico-Tenochtitlan.

Female goddesses, warriors, Sun companions, grandiose and eternal. Fertility Symbol and lineage willingness, example of courage and deliverance. Their eyes closed, open mouth, singing to death, death or singing, eternal life and the struggle between what man is and what the gods represent.

Magnificent clay sculptures, samples of mastery and mystery, walking towards Mictlan, red, blue, adorned with snails and extraordinary snakes, burning copal pleasing the gods of the sky. Are the El Zapotal Cihuatéotl, the best example of female power, of the respect that its characteristic strength gives them.

Their eyes closed, as if hiding something more than a glance behind her eyelids, hiding life reality that sometime was sublime. Mouth open, as if expressing the mother’s pain and recounted the history that hundreds of women like her lived.

The Cihuateteo or Cihuapipiltin in Aztec mythology were spirits, (gods of excess), Macuiltonaleque sisters (excess gods) who were souls of noble women dead at child birth (mociuaquetzque). Contrary to the Civatateo honored as men killed in battle. The Cihuateteo were pale white faces skeletons, eagle feet instead of hands and dressed with lace dresses decorated with tibias crossed.

The Codex Borgia, within the “Great Mother” concept, the Cihuapipiltin are the epitome of women dying at their first child birth. “Noble women” or Cihuateteo were the Cihuapipiltin “divine women”. These women or mocihuaquetzque, were worshipped with extensive magical facets; parts of their bodies were prized objects for warriors and mages who saw them as magical instruments. Their hierarchy allowed them to be buried in the Cihuapipiltin temple patio. In fact, they were considered part of warriors killed in battle, of the sun entourage. They were considered responsible for adultery.

These women appear nine times in the codex, represent newly birthed women, with naked torso with full and heavy breasts, folds in the belly. There are four Cihuateteo in sheet 46. The body painting is yellow with profile body to show us the folds in the womb of their status as newly birthed. On their black hair have the insignia wig made of amatzontli paper with feather ornate to indicate their sacrificed woman character (killed) in the sacred action of conceiving life. The hair is tied with a wide leather strip adorned in the front with a larger size feather. Between the latter and the wig, protrude two hair tufts placed vertically.

In times of Yenistle III King of the Totonaca dynasty, one of his wives gave birth to a girl called Tzacopomtziza (dawn shining star), because of her singular beauty was consecrated to the cult of the Tonacayohua, carer of seeding, bread and food.

But a Prince named Zkatan-Oxga (young venison) fell in love with her, while he knew that such sacrilege was punishable with death, one day when Tzacopomtziza came out of the temple, he abducted her and escaped with her to the mountain, on their way a monster wrapped them with fire waves forcing them back to where the priests anfgrily awaited them and before Zkatan-Oxga could speak, both their throats were cut. Their hearts were thrown in the goddess altar.

When the grass dried, from their blood began to sprout a shrub, with thick foliage giving birth to a climbing orchid covering the thick foliage with amazing speed and exuberance, perfuming the ambient with its aroma. Jose de Jesús Núñez and Domínguez.

From Veracruz to El Zapotal directly in taxi takes around 2:15 hours.

By taxi or by car from Cordoba to El Zapotal takes 2:10 hours.

By taxi or by car from Orizaba to El Zapotal takes 2:25 hours.

By taxi or by car from Puebla to El Zapotal takes 4:00 hours.