History of the city Teotihuacan 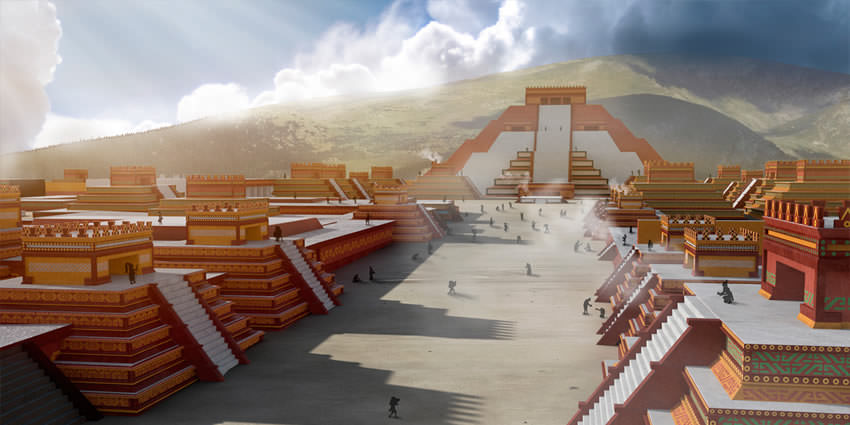 Sometime around 100 BCE, 45 km from where today we find Mexico City, construction began on the spectacular city of Teotihuacan.

The history of the city is divided into 6 phases, and stages of development: Patlachique, Tzacualli, Miccaotli, Tlamimilolpa, Xolalpan, and Metepec. This division is based on stratigraphic data and on the characteristics of ceramic styles of different time periods.

However, we are not sure of the precise definition of temporal boundaries of these phases due to the small amount of archaeological data and the imperfection of radiocarbon dating.

It is believed that a large settlement on the site of Teotihuacan emerged at the beginning of a millennium BC Perhaps part of the first inhabitants of the city comes from the Olmec. The name Teotihuacan means “the place where the gods touch the ground”.

This place is considered sacred and attracted people. It was here, according to legend, in early times were born gods of the sun and moon, and were launched by the fundamental law of the world.

In the 1 millennium BCE, this area has increased seismic activity in the earth. Perhaps the people of the city had to restore their homes and temples. From 5th century BCE, settlement begins to grow and develop rapidly.

In 300 BCE settlement into a real city. The city later settled around a central axis (“Avenue of the Dead”) and was divided into four quarters with large public buildings, places of worship, markets, palaces, and houses.

The whole territory of Teotihuacan was paved with slabs of gypsum. Buildings of the city had the floors of mica and the stone walls of the houses were covered with pieces and painted scenes from mythology and rituals, or decorated with bas-reliefs.

By 200 BCE the city-operated an irrigation system and water from lakes spread over an extensive network of canals. Residents of the city were engaged in farming and handicrafts. They became widely known as excellent potters, architects, and artists.

Thanks to its talented residents of Teotihuacan the city grew from a small village into a magnificent religious center and gained fame and an abundance of natural beauty.

From 1 to 250 CE center of Teotihuacan was built entirely, including the Pyramids of the Sun and the Moon, and “The Avenue of the Dead.”

For the construction of the pyramid of the sun, there were about 20,000 workers building it for 30 years. Initially, the height of the pyramid was about 71 meters, and now it is 64.5 m. The perimeter of the base – is about 900 m.

The Pyramid of the Sun is the third on the list of the biggest pyramid in the world.

“Avenue of the Dead” (Calle de Los Muertos, or Miccaotli in Nahuatl). The width of the street is 40 m. Length – 2,3 km. The architecture of Teotihuacan is characterized by several techniques which then were widely used in Mesoamerican Region:

From 200 to 500 AD Teotihuacan is an empire. The city-state is dominant over the whole of Central Mexico.

During that period begins the expansion to the south. Teotihuacan comes to the town of Kaminaljuyu and in its place, people constructed a miniature copy of their capital, which became the south-eastern outpost of the empire.

Teotihuacan also came to Tikal and Uashaktun and they become its protectorate.

In 250 CE Teotihuacan with Kaminaljuyu emerged a trading alliance with Tikal.

In 377 CE leader of the army of Teotihuacan Siyah-Kak (“Was born fire”) invaded the land of the Maya, killed Chak-Tok-Ichaak (“The Great Cloud’s paw”), and established there the power of the king of Teotihuacan, the “Owl-Spearthrower”.

His young son Nun Yash Ayin-I (“green crocodile”) in 378, was put on the throne of the kingdom Mutul with the capital city of Tikal. However, there is no consensus among historians whether the theory of the origin of a new dynasty of Tikal from Teotihuacan is true.

The flourishing of the capital of the empire (Teotihuacan) is 400 CE. when its population was (according to different estimates) 85,000 to 200,000 and an area of 21–30 square km. It was the 6th city in the world by value in that period of time.

In 500 CE Tikal was already inhabited by the people of Teotihuacan and they bring in their own customs, rituals, and sacrifices.

By the end of the 6th century CE, begins sunset of the city. The influence of Teotihuacan on the Mayan city is reduced to a minimum.

By the beginning of 7th century CE, Teotihuacan lost its possessions in Central Mexico. Between 600 and 650 CE was the fall of Teotihuacan. It is believed that it was conquered, and then burned and destroyed by outsiders – Chichimecas.

This post was contributed by Paper Written, professional online writing service for those struggling with their writing. Whether you are a student having a hard time writing your descriptive essay, an MA major trying to draft a dissertation, or a graduate looking for ways to enhance your resume – PaperWritten.com is your best solution.