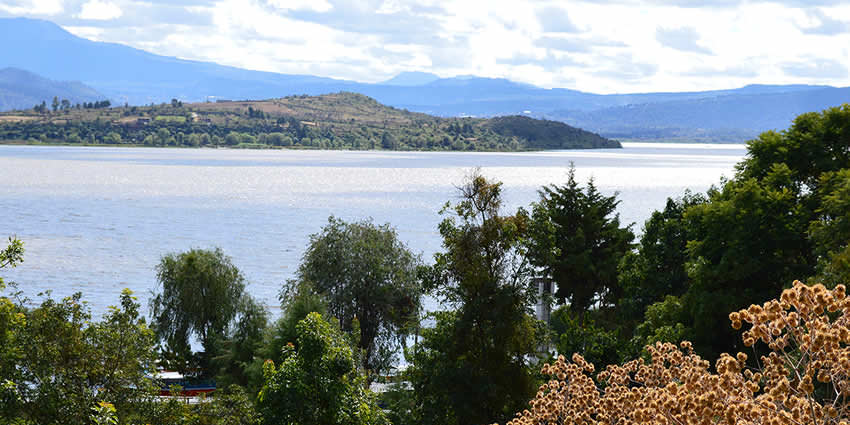 Lake Pátzcuaro (Lago de Pátzcuaro) is a lake in the municipality of Pátzcuaro, Michoacán, Mexico.

Lake Pátzcuaro lies in an endorheic basin, which does not drain to the sea. A watershed area of 929 square kilometers drains into the lake, of which 126 are the water body.

The Lake Pátzcuaro watershed extends 50 kilometers east-west and 33 kilometers from north to south.

Lake Pátzcuaro lies at an elevation of 1920 meters, is the center of the basin, and is surrounded by volcanic mountains with very steep slopes. It has an average depth of 5 meters and a maximum of 11.

The Lake Pátzcuaro basin is of volcanic origin. At times it has been part of an open and continuous hydrological system formed by Lake Cuitzeo, Pátzcuaro, and Lake Zirahuén, which drained into the Lerma River.

Today, like lakes Cuitzeo and Zirahuén, it is a closed basin, although ecologists consider it a sub-basin of the Lerma-Chapala basin.

The lake is surrounded by extensive wetlands. Cattails and other reedy vegetation are the dominant wetland vegetation, in dense stands over 2 meters tall.

The wetlands are extremely important for birds, both year-round inhabitants, and migrating waterfowl. Close to 200 species inhabit the wetlands, including some endemic species.

The lake and its surrounding wetlands have undergone significant environmental changes over the past 50 years.

Logging and agriculture in the surrounding watershed have contributed to the siltation of the lake, and water diversion for agriculture and urbanization has reduced the size of the lake.

Other threats include untreated sewage, the introduction of exotic species, and chemical pollution.

In the watershed surrounding the wetlands, the natural terrestrial vegetation is composed of:

In the last fifty years, human activity in the watershed has intensified.

Farming and livestock ranching in the basin have significantly increased. Over 10,000 hectares of forest have been lost to logging, fires, fuelwood gathering, and clearance for farming and ranching.

The Lake Pátzcuaro basin is home to the Purépecha people. Purépecha leaders established the basin as the heartland of the Tarascan state, which rivaled the Aztec Empire before the Spanish conquest.

The towns of Ihuatzio, Tzintzuntzan and Pátzcuaro were important Purépecha centers.

Islands in the lake

Towns along the lake shore