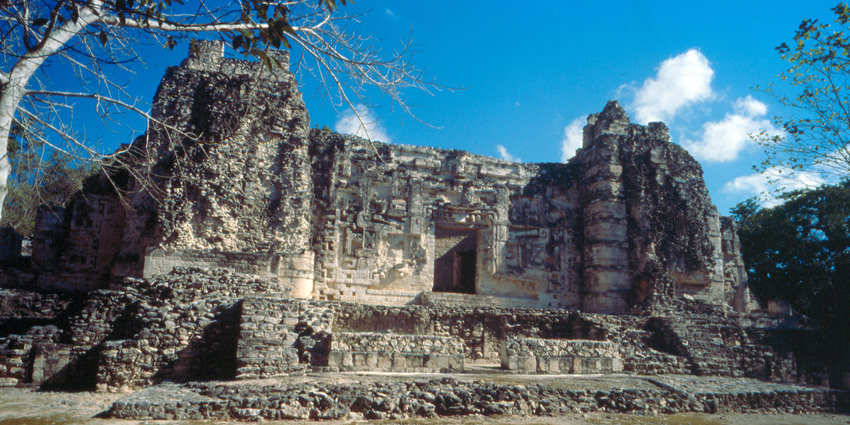 Hormiguero is located in the state of Campeche midst the large group of ruins in the Rio Bec area.

This incredible archaeological site lies in the thickness of the jungle. Hormiguero is just a few kilometers off of the main highway running south from Xpujil. The area outlines an atmosphere of calm and peace. You get pretty deep into the jungle of the Calakmul Biosphere Reserve.

In addition, being immersed in the vast jungle, moisture abounds allowing small plants to cover much of the structures and passages, providing a stage that will transport you to the splendor of this mayan city.

Hormiguero has several beautifully carved structures with particularly notable details, such as Structure IV which has a façade with a large mask in rounded towers with unfinished staircases and, like a door, a monstrous mouth with jaws open, symbolizing a portal between the outside world and the underworld.

Hormiguero is a little known site that is a delightful pleasure to visit.

Hormiguero was a mayan city which was at its peak in the Late Classic period (650–850).
Hormiguero was reported by Ruppert and Dennison during their Carnegie expedition in 1933.
Nevertheless, it wasn’t until 1979 when the first excavation of the zone were begun.

Only a few of its 84 known structures have been excavated. The site is rich in architectural ornamentation on the buildings.

The site is located on flat land with slight elevations towards the south and consists of three main group of structures.

Structure II is the most completely excavated building at the site and one of the most wildly theatrical of all Rio Bec buildings. It is the most important temple of the site due to its size and the elaborate carvings on the facade. The facade consists of three main sections divided by two towers with rounded corners, typical of the Rio Bec region.

It is a rectangular platform, with two soaring, false-staircase towers either side of a colossal Chenes-style monster-portal. Inside there are several large chambers.

Unlike some structures, the towers are not false in that underneath a corridor exists that connects the platform of the central facade with the side ones. The central faced is a large mask of Itzamna, the door a giant mouth. The steps of temple are carved like teeth, with the entry way, a giant tongue.

Nearby is the Central Group, a complex of large temples, most of which are not excavated. Of those that are, Structure V is the most impressive. It is a towering pyramid with a well-preserved Chenes-style temple at the top.

Structure V is located in the Central Group and is a building much smaller than Structure II, but the mask is much better preserved. The mask is an enormous representation of the monster of the Earth, in which the open jaws form the entrance to the building. On each corner of the building are multiple rows of well preserved Chaac masks, God of rain.

Guided tour
The most easy way to visit Hormiguero and surroundings is reserve a one day guided tour from Chetumal.
There are a lot of local tour agency in Chetumal.

At the site, there are some nice trails through the jungle for either hiking or mountain biking. Hiking in the jungle is fun. There’s a monkey cave along the trail.

Please plan to arrive at the site one hour before closing in order to have enough time for your visit.
Suggested visiting time: 2 hours

It is possible to combine Hormiguero with a visit to Xpuhil, Rio Bec, Becan and Balamku as all 5 sites can be easily visited in one day.