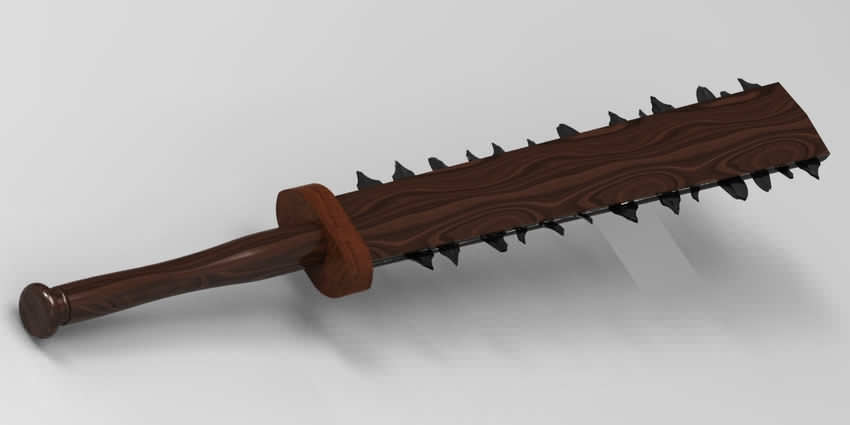 A macuahuitl is a wooden club with obsidian blades. The name is derived from the Nahuatl language and means “hand-wood”.

Its sides are embedded with prismatic blades traditionally made from obsidian; obsidian is capable of producing an edge sharper than high-quality steel razor blades. The macuahuitl was a standard close combat weapon.

The use of the macuahuitl as a weapon is attested from the first millennium CE. By the time of the Spanish conquest, the macuahuitl was widely distributed in Mesoamerica. The weapon was used by different civilizations including the Aztec (Mexicas), Mayan, Mixtec, and Toltecs.

One example of this weapon survived the Conquest of Mexico; it was part of the Royal Armoury of Madrid until it was destroyed by a fire in 1884. Images of the original designs survive in diverse catalogs.

The oldest replica is the macuahuitl created by the medievalist Achille Jubinal in the 19th century.

The macuahuitl is a type of macana, that was a common weapon used by the Aztec military forces and other cultures of central Mexico. It was noted during the 16th-century Spanish conquest of the region.

Other military equipment recorded includes the round shield (chīmalli), the bow (tlahuītōlli), and the spear-thrower (ahtlatl). Its sides are embedded with prismatic blades traditionally made from obsidian; obsidian is capable of producing an edge sharper than high-quality steel razor blades.

It was capable of inflicting serious lacerations from the rows of obsidian blades embedded in its sides. These could be knapped into blades or spikes, or into a circular design that looked like scales. The macuahuitl is not a sword or a club, although it approximates a European broadsword.

According to conquistador Bernal Díaz del Castillo, the macuahuitl was 0.91 to 1.22 m long, and 75 mm wide, with a groove along either edge, into which sharp-edged pieces of flint or obsidian were inserted and firmly fixed with an adhesive.

The rows of obsidian blades were sometimes discontinuous, leaving gaps along the side, while at other times the rows were set close together and formed a single edge. It was noted by the Spanish that the macuahuitl was so cleverly constructed that the blades could be neither pulled out nor broken.

The macuahuitl was made with either a one-handed or two-handed grip, as well as in rectangular, ovoid, or pointed forms. Two-handed macuahuitl has been described as being “as tall as a man”.

According to National School of Anthropology and History (ENAH) archaeologist Marco Cervera Obregón, there were two versions of this weapon: The macuahuitl, about 70 to 80 centimeters long with six to eight blades on each side; and the mācuāhuitzōctli, a smaller club about 50 centimeters long with only four obsidian blades.

According to Ross Hassig, the last authentic macuahuitl was destroyed in 1884 in a fire in the Real Armería in Madrid, where it was housed beside the last tepoztopilli. According to Marco Cervera Obregón, there is supposed to be at least one macuahuitl in a Museo Nacional de Antropología warehouse, but it is possibly lost.

No actual macuahuitl specimens remain and the present knowledge of them comes from contemporaneous accounts and illustrations that date to the 16th century and earlier.

The macuahuitl predates the Aztecs. Tools made from obsidian fragments were used by some of the earliest Mesoamericans. Obsidian used in ceramic vessels has been found at Aztec sites. Obsidian cutting knives, sickles, scrapers, drills, razors, and arrow points have also been found.

Several obsidian mines were close to the Aztec civilizations in the Valley of Mexico as well as in the mountains north of the valley. Among these were the Sierra de las Navajas (Razor Mountains), named after their obsidian deposits.

The use of the macuahuitl as a weapon is attested from the 1st millennia CE. A Mayan carving at Chichen Itza shows a warrior holding a macuahuitl, depicted as a club having separate blades sticking out from each side.

In a mural, a warrior holds a club with many blades on one side and one sharp point on the other, also a possible variant of the macuahuitl.

By the time of the Spanish conquest, the macuahuitl was widely distributed in Mesoamerica, with records of its use by the Aztecs, Mixtecs, Tarascans, Toltecs, and others. It was also commonly used by the Indian auxiliaries of Spain, though they favored Spanish swords.

As Mesoamericans in Spanish service needed special permission to carry European arms, metal swords brought Indian auxiliaries more prestige than macuahuitl in the eyes of Europeans as well as natives.

The macuahuitl was sharp enough to decapitate a man. According to an account by Bernal Díaz del Castillo, one of Hernán Cortés’s conquistadors, it could even decapitate a horse:

Pedro de Morón was a very good horseman, and as he charged with three other horsemen into the ranks of the enemy the Indians seized hold of his lance and he was not able to drag it away, and others gave him cuts with their broadswords, and wounded him badly, and then they slashed at the mare, and cut her head off at the neck so that it hung by the skin, and she fell dead.

Another account by a companion of Cortés known as The Anonymous Conqueror tells a similar story of its effectiveness:

They have swords of this kind — of wood made like a two-handed sword, but with the hilt not so long; about three fingers in breadth. The edges are grooved, and in the grooves they insert stone knives, that cut like a Toledo blade. I saw one day an Indian fighting with a mounted man, and the Indian gave the horse of his antagonist such a blow in the breast that he opened it to the entrails, and it fell dead on the spot. And the same day I saw another Indian give another horse a blow in the neck, that stretched it dead at his feet.

They used … cudgels and swords and a great many bows and arrows … One Indian at a single stroke cut open the whole neck of Cristóbal de Olid’s horse, killing the horse. The Indian on the other side slashed at the second horseman and the blow cut through the horse’s pastern, whereupon this horse also fell dead. As soon as this sentry gave the alarm, they all ran out with their weapons to cut us off, following us with great fury, shooting arrows, spears and stones, and wounding us with their swords. Here many Spaniards fell, some dead and some wounded, and others without any injury who fainted away from fright.

Given the importance of human sacrifice in Nahua cultures, their warfare styles, particularly those of the Aztec and Maya, placed a premium on the capture of enemy warriors for live sacrifice.

Advancement into the elite cuāuhocēlōtl warrior societies of the Aztecs, for example, required taking 20 live captives from the battlefield.

The macuahuitl thus shows several features designed to make it a useful tool for capturing prisoners: fitting spaced instead of contiguous blades, as seen in many codex illustrations, would intentionally limit the wound depth from a single blow, and the heavy wooden construction allows weakened opponents to be easily clubbed unconscious with the flat side of the weapon.

The art of disabling opponents using an un-bladed macuahuitl as a sparring club was taught from a young age in the Aztec Tēlpochcalli schools.

Obsidian blades also have difficulty penetrating European ring mail. The thin, replaceable blades used on the macuahuitl were easily dulled or chipped by repeated impacts on bone or wood, making artful use of the weapon critical.

It takes more time to lift and swing a club than it does to thrust with a sword. More space is needed as well, so warriors advanced in loose formations and fought in single combat.

Replicas of the macuahuitl have been produced and tested against sides of beef for documentary shows on the History and Discovery channels, to demonstrate the effectiveness of this weapon.

On the History show Warriors, special forces operator and martial artist Terry Schappert injured himself while fencing with a macuahuitl; he cut the back of his left leg as the result of a back-swing motion and commented: “I think I might need sutures, it’s deep”.

For SpikeTV’s reality program Deadliest Warrior a replica was created and tested against a model of a horse’s head created using a horse’s skeleton and ballistics gel. Actor and martial artist Éder Saúl López was able to decapitate the model, but it took three swings.

Blows from the replica macuahuitl were most effective when it was swung and then dragged backward upon impact, creating a sawing motion.

This led Max Geiger, the computer programmer of the series, to refer to the weapon as “the obsidian chainsaw”. This may have been due to the crudely made obsidian cutting edges of the weapon used in the show, compared with more finely made prismatic obsidian blades, as in the Madrid specimen.