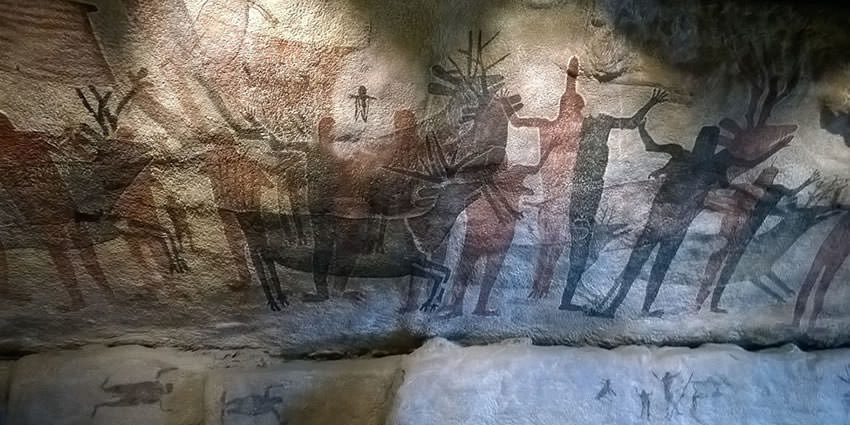 The cave paintings of the Sierra de San Francisco, in the Baja California peninsula, make up a set of pre-Hispanic murals, particular to the Great Mural style, which had its moment of greatest splendor in the Aridoamerican era, in the annals of pre-Columbian history.

It is very possible that these murals were created by the ancestors of the Cochimí Indians, who occupied this region until they disappeared almost completely in the 19th century, as a much later consequence of the Spanish conquest.

These paintings on the roofs and walls of rock shelters in the Sierra de San Francisco were first discovered in the eighteenth century by the Mexican Jesuit missionary José Mariano Rotea.

According to some native beliefs recorded by the Jesuits and others, the paintings were drawn by a race of giants. This belief may have been suggested by the larger-than-life-size of many of the human (as well as animal) figures.

Some observers have speculated that the paintings had meanings relating to hunting magic, religious practices, or ancestor worship, but there is no consensus on these interpretations.

A growing body of radiocarbon dates relating to the paintings has suggested ages from as early as 5500 BCE to as late as European contact in the eighteenth century.

These spectacular cave paintings were recognized as a World Heritage Site by UNESCO in the early 1990s.

Located in the central area of ​​the Baja California peninsula, in the area known as Aridoamérica, the paintings of the Sierra de San Francisco include several sets of murals:

The representations in these paintings present us, animal and human figures, life-size and even larger; also abstract motifs, in red, black, white, and yellow.

These ancient paintings are interpreted as markers of territory and religious and ritual manifestations. But in addition, these pictorial creations of Prehistoric Mexico give us clues about the social relations that existed between the ancient hunters who lived in this area about 5,000 years ago.

The caves where these cave paintings are found are known to have been occupied about 3,300 years ago. Spearheads have also been found that were used by the ancient inhabitants of the place to hunt mammoths and sloths.

It is considered that the paintings of the Sierra de San Francisco in the Baja California Peninsula were created in the period between 8800 B.C. and 1700 A.D.

Those who wish to visit this space declared as Cultural Heritage of Humanity by UNESCO can camp in the place known as El Cacarizo. There are some tourist services available in this archaeological zone such as identification cards, guides, and information modules.

To go to this archaeological site, it is necessary to arrive by the dirt road that begins in the sector of the peninsular highway (federal highway number 1) that links the community of San Ignacio with the town of Vizcaíno, that is, about 46.7 kilometers of the deviation that leads to San Ignacio.