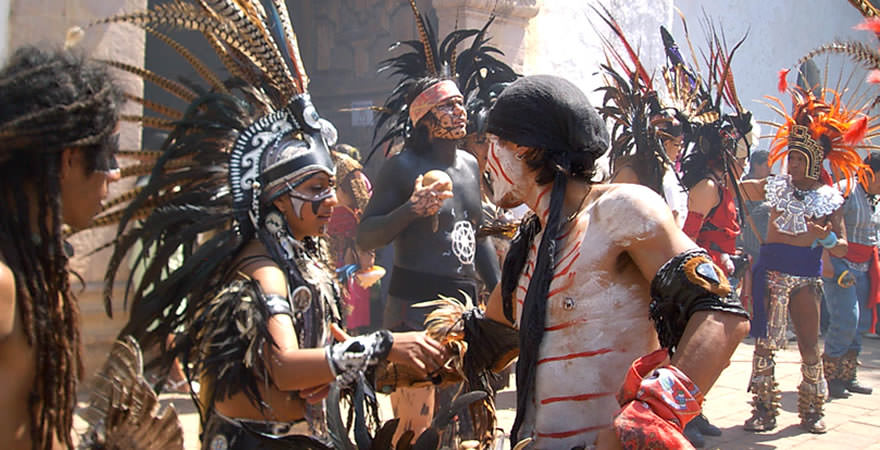 This article was kindly contributed by Javier Ruiz Ocampo, the Chronicler of Taxco.

The tribute to Cuauhtémoc starts on February 22 in the city of Taxco, at around 18:00 o’clock, when arrive caravans that come to Ixcateopan by transport from Mexico City and different states and even abroad with gatherings of artists of the diverse ethnic groups and locals of Mexico and different natives that appreciate and venerate Cuauhtémoc.

In Taxco they make a brief ceremony, and when they complete they keep on Ixcateopan, running by walking with the sacred fire they light in the Templo Mayor of Mexico since they have to arrive at midnight to deposit it in the Church in Ixcateopan where the tomb of Cuauhtemoc is.

There are no interpreters to different dialects. Every gathering express with extremely uncommon contributions where they bring blooms, bread and seeds to plant in their kin favored by Cuauhtémoc who adore them and who tell their sorrows in their language, their triumphs and all that transpired that year and request that they improve.

It is every unique experience to observe and the ceremony endures throughout the night in light of the fact that every ethnic group arrives on its own and at different times and lines up to be permitted to enter its tomb. The inside of the church of the sixteenth century currently devoted to Cuauhtemoc.

That is the reason it is better being there from the 22nd during the evening, since they likewise go with their prayers with pre-Hispanic music and dances, what gives another value to the ceremony of each group that only take place inside and that the venue isn’t expansive and just special individuals can enter, some of the time additionally thusly.

So if you just want to see dances, costumes and buy crafts you can see them outside throughout the night and day 23, yet this you see day by day in Mexico City outside the Templo Mayor, however ceremony inside the church in Ixcateopan is one of a kind and you must be ready the entire night to enter.

It is extremely intriguing and special this ceremony is just completed in Ixcateopan where the tradition says that the mother of Cuauhtémoc was born and there rest the remaining parts of the Tlatoani.

Outside there are additionally gatherings, meetings between the natives and visitors, as 95 percent sleep in the square and also in the day there are other events such as pictorial shows, photos, meetings, and travel to the local museum with the history of the conquest.

Following day, 23 of February at 12:00 (early afternoon) there is another ceremony where the papantla fliers usually take part, until 15:00, when the municipal president offers the food to all the participants.

Ixcateopan is 35 km away from Taxco, and it takes about 2 hours because it is a mountain, and the road has many curves. At that time there is no public transport, only taxis.

Who is really interested in living the culture of authentic Mexicans should be in Ixcateopan from 12 at night. The most important thing is from 00:00 o’clock at night until 14:00 o’clock in the afternoon of the day 23rd, so it is convenient to sleep in Ixcateopan, which only has a hotel with 8 rooms, so it is urgent to reserve, or to carry a tent because authorities enable land with security for those who sleep there but there are no public toilets.

There are also some private houses that on that day function as a hotel.

There are about 3 restaurants, and about 5 houses that sell typical food like quesadillas cakes and small shops that sell cans of food, bread and soda, so it is convenient to bring a small supply for dinner and breakfast even though the authorities distribute coffee and free bread are hundreds of people who come. They also offer a meal on the 23rd with a Rico Mole with chicken and tortillas.

There is medical service and a small hospital in case it is offered.

Some stay until later or because they are allowed to sell their handicrafts, but tourists start to leave Ixcateopan because transportation from 16:00 is very requested and each vehicle only has capacity for 12 people.

After 8 o’clock shops, shops and generally has several fast Mexican food stalls such as tacos etc. On the day from 05:00 in the morning there is public transportation to Taxco and Iguala, that day every hour, the trip takes 1 hour 40 min approx.

Thanks to Javier Ruiz Ocampo, the Chronicler of Taxco for this very interestning and useful information.