Things to do in Cozumel 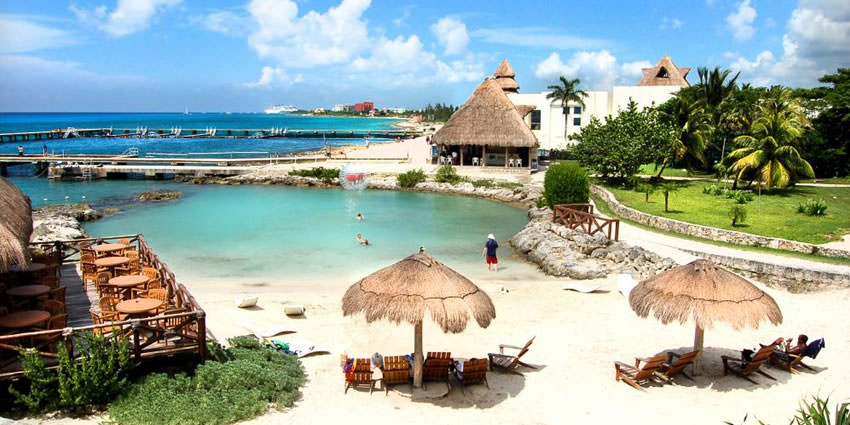 The Mexican island of Cozumel awaits you with its paradisiacal beaches and all its Mayan and Caribbean charm. These are the 15 best things to see and do in Tierra de las Golondrinas (“Land of the Swallows”).

Admire the architecture of Cozumel

Cozumel has some beautiful samples of traditional residential architecture in the Caribbean. They are generally two-story houses, with high ceilings, front terraces facing the sea, and large windows.

Some are so prominent that they were adopted as headquarters for government agencies. Another architectural field in which Cozumel excels is in the construction of palapas, the typical open huts with a palm roof that are common on the American tropical coasts.

Surely you go to Cozumel, especially for its beaches, but it is worth knowing a little about the history of the island and its head, San Miguel, through its main monuments. The statue of Juan Bautista Vega is a curious image that holds a machete and a book.

Vega was kidnapped by the Mayans when he was 12 years old and the indigenous people spared him because he could read and write.

Other striking monuments are the Municipal Public Clock, the Monument to Mestizaje, the Cross of Cozumel, and the Monument to the 201 Squadron, which honors Mexican soldiers who fought in World War II.

Thousands of people visit Cozumel for carnival, attracted by parties that have become the best in the state of Quintana Roo.

He has represented Mexico in the Caribbean Carnival Network and has an impeccable organization and enormous enthusiasm on the part of the island’s inhabitants. The main carnival focus is the San Miguel de Cozumel Carnival Palace, where massive dances are staged.

The great walks through the streets are spectacular, with dozens of allegorical floats. The costumes dressed by the participants are true pieces of art of popular design and ancestral traditions, such as Los Chinelos, are mixed with contemporary customs.

The reefs of Cozumel are part of the Great Mayan Reef, the largest coral reef in America and second in the world, after the Great Barrier Reef in Oceania. The park is predominantly maritime and in its small land area, it houses species at risk, such as freshwater turtles, gray fox, and dwarf raccoon.

The marine fauna is much more varied, constituting a paradise for underwater sports enthusiasts and observers of biodiversity. Apart from different types of corals, turtles, blue sharks, sharks, crabs, rays and many other species of fish live in the beautiful ecosystem.

The easternmost end of the Mexican Republic is Punta Molas. It is named after Miguel Molas, a 19th-century Catalan cartographer and military man who settled in Yucatán. At the top, there is a lighthouse from which you have a spectacular view of the ocean.

It is advisable to go in a four-wheel-drive vehicle since the roads are somewhat steep. Another attraction is the Caracol Tomb, a Mayan archaeological site dedicated to the goddess Ix Chel.

Near the lighthouse, there is a good hotel offer, used by people who prefer the beaches of this part of the island.

This beautiful beach with calm waves, located southwest of Cozumel, is one of the most frequented on the island. It is a long and narrow belt of white sand located in front of the coral reef. It has an area with a large accumulation of remains of seashells and snails, some very striking.

The proximity of the reef offers good opportunities for snorkelers and divers to appreciate the diversity of fish and other species in the clear waters. There is a diving school on the beach and boat trips to the nearby reefs can also be done.

Spend a day in Chankanaab

It is an eco-park located 10 kilometers from San Miguel de Cozumel. It has a beautiful beach and lagoons, ideal for snorkeling and diving, and with a great diversity of fauna and flora.

There is an excellent supply of palapas by the sea and several restaurants that serve the exquisite and fresh marine fruits of the Mexican Caribbean. It also has a museum of caving and in the lagoons, it is possible to see dolphins and manatees.

In addition, there is a small botanical garden and a set of replicas of Mesoamerican pre-Hispanic buildings.

This part of Cozumel is of enormous beauty, worth photographing. It is an almost uninhabited area and there you can feel in the wild territory as soon as you get away from the few bars installed.

The beach is long, wide enough, and with a striking crescent shape. The sand is very pleasant to the touch and the waters are clear. It has the particularity that it has a flatter area that is after you enter a few meters into the sea.

It is a natural pool secluded between rocky structures, located east of the island of Cozumel.

Its waters are completely calm, which is why they constitute a paradise for swimming. It owes its name to a river that flowed into the beach and that dried up, only to reappear after Hurricane Wilma.

The river channel was widened and conditioned to guarantee its natural flow with greater safety. The combination of ecosystems has created a particular flora and fauna, with the typical variety of mangroves.

The beach is very clean and they offer simple but exquisite food, based on the local fish and shellfish.

Get to know the Cedral Fair

In El Cedral, a small town located south of Cozumel, the most important traditional festival on the island takes place. In the mid-nineteenth century, during the Caste War, the town of Sabán, in the Yucatán Peninsula, was attacked by indigenous people.

To save their lives, some survivors left for the island of Cozumel, carrying a wooden cross. They swore that every year they would celebrate colorful festivities in honor of the Holy Cross.

This fair has been held since then between the end of April and May 3, the day of the Holy Cross. It includes bullfights, cultural events, musical concerts, dances, and all the joy of Mexican festivities.

In Cozumel, there are several archaeological sites of the Mayan civilization.

The most important site is that of San Gervasio, where the Mayans worshiped the goddess Ix Chel. This deity was one of the most important in the Mayan pantheon, as it was the supreme authority in matters of love, fertility, and health.

Among the most important structures in San Gervasio are Las Manitas, a room that is believed to have been the residence of Señor Itzá de Cozumel about a thousand years ago.

Other relevant buildings are the High House, the Central Plaza, The Arch, the Big House, and the Chi Chan Nah, a place for rituals.

Fall in love with the Island of Passion

This beautiful little island is very close to Cozumel. It is part of the Protected Natural Area of ​​Cozumel and has a splendid beach of approximately one kilometer in length, with white sands and surrounded by transparent turquoise waters.

Mayan couples who got married made pilgrimages to Mukyaj Peten, the island’s indigenous name, to pay tribute to Ix Chel, the goddess of love and fertility. Now it is Mexicans and foreigners, regardless of ethnicity, who go to this Caribbean Eden to get married in unforgettable ceremonies and celebrations.

They say that couples who get married on the Island of Passion live a passionate existence and the unions are lasting.

The motorcycle is a very appropriate means of transport to travel the island of Cozumel since it allows you to move quickly through towns, roads, and somewhat bumpy stretches.

Rolling along the roads that make the perimeter of the island, you can admire beautiful places, some almost virgin, while the pleasant and healthy sea breeze hits your body.

This means of transport also gives you the opportunity to visit little-publicized places, where you can taste delicacies served in those places that do not appear in tourist brochures or have web pages.

Riding a motorcycle is also more comfortable to get into the sea every time you see a beach that you like.

Take the best photos from the viewpoints

Cozumel has several viewpoints that are the perfect locations to take the best photos of the Caribbean Sea and other natural landscapes.

On the way to the Celarin Lighthouse (“Faro Celarin”), there is the rustic viewpoint of the Colombia lagoon, from which you can admire birds and crocodiles. It is the Bufadoras area, visitors climb the coral formations to admire and photograph the impetuous sea.

On the road from Punta Sur to Mezcalitos, next to the bike path, there is another viewpoint, with thick timbers, where people stop to breathe fresh air and take a picture of the beautiful environment.

Enjoy a night of clubs and bars

The Caribbean islands invite you to a night out after resting for a while after a day at the beach. Enjoying an ice-cold beer or a tropical cocktail on a terrace cooled by the sea breeze, with a starry sky above your head, is priceless.

In Cozumel, you have many options and two of them are Rasta’s Bar, a place with a relaxed atmosphere located on the beach on the road to Mezcalitos, and No Name Bar, with a good selection of music.