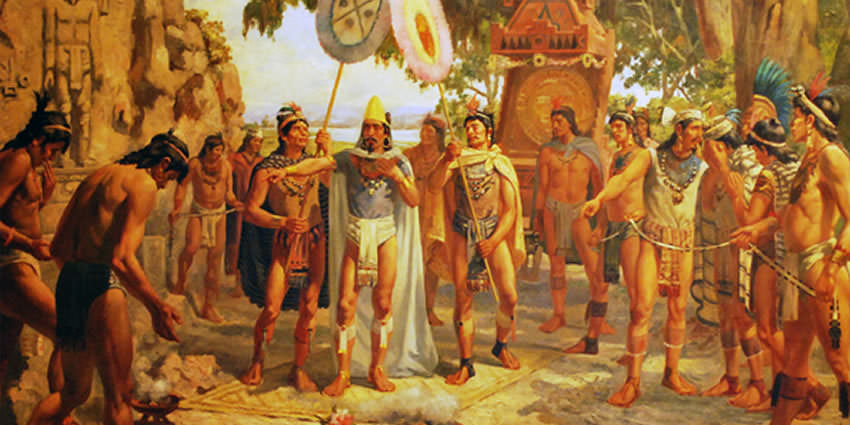 Motecuhzoma (Montezuma) I ruled from 1440 to 1468. He was solely focused on the expansion of the Aztec Empire.

Following his death, the Aztecs were probably ruled for three decades by weak and ineffective leaders.

Then, in 1502 Motecuhzoma II came to power. Under his leadership the practice of human sacrifice expanded. He ruled between 15 and 20 million people. Before the Spaniards arrived he was known for his bravery and successful military campaigns against the Mayans and the Mixtec.

At the lime of the Spanish Conquest, Montezuma was forty years old He can be described of average height and of slender build. He was muscular in appearance. According to the Spaniards, his skin had the natural color оf an Indian He wore his black hair just below his ears, and he had a black beard that was thin and well-trimmed.

Motecuhzoma was a very clean person. He bathed every day in the afternoon. He did almost nothing for himself. He had two legitimate wives and hundreds of mistresses. Main of his mistresses were daughters of Chieftains.

In his palace he kept two hundred Chieftains in rooms close to his own. Not all of them were permitted to talk directly to Mont­ezuma, but if they did they had to be clean and barefoot, dressed in humble clothing, and they were never allowed to make eye contact. Before they could speak to him they first had to say. “Lord, my Lord, my great Lord.” Then, after they spoke, they had to back out of the room without turning their backs.

Thirty dishes were prepared by his chefs for each meal. His favorites included turkey, pheasant, partridge, quail, duck, rabbit, venison and wild boar. While he ate, he sat in a richly decorated low stool with a matching table. His servants placed a white table cloth and napkins on the table. Four beautiful women washed and dried his hands before he ate. At the same time, two women brought him tortillas. Then, as soon as he began eating they placed a gold screen in front of him so that no one would see him eat.

While he ate he sometimes conversed with the elder Chieftains. If they were asked to eat with Montezuma, they had to do so standing up. Sometimes while he ate he was entertained by small humpback jesters who told him witty sayings and sang and danced. In addition, he maintained groups of stilt walkers, acrobats, musi­cians, and on the assortment of dance troupes.

Motecuhzoma drank cacao, which was a highly prized trade item. The drink cacao was so popular that it was used as currency in the Aztec empire Then, when the music and dancing ended Montezuma would smoke tobacco Alter Montezuma finished eating, his kitchen fed his entire guard This was generally food and drink for a thousand. They too preferred cacao. It was not uncommon for the kitchen to serve two thousand jugs of cacao a meal.

Eyewitnesses reported that Motecuhzoma had two houses that were filled with arms and that many weapons were adorned in gold and jewels.

He also had a palace aviary that contained every color of feather imaginable. There were exotic birds of all sizes and colors. Some of the birds had as many as five brilliant colors each. In addition, he maintained a flock of flamingos. Feathers were plucked and harvested. The green quetzals were the highest prized and used only by royally. The rich green feathers were used for the loyal litter and royal clothing.

Also Motecuhzoma maintained a large collection of venomous snakes and his own zoo of carnivorous animals. This area of the palace was described as very noisy.

Montezuma employed a vast amount of gilded craftsmen He maintained gold and silversmiths, people who only worked with feathers, pointers and sculptors. He also maintained a staff of stone cutters, masons, and carpenters just for the needs of the palace.

The gardens of Motecuhzoma‘s palace were filled with ponds, flowers, and scented trees. It was a town within a town. It even had a building just for the mu­sicians and their rehearsals. Everything, the walkways, the ponds, and the rooms were made with masonry that was perfectly cemented together.

Motecuhzoma‘s downfall happened quickly. At the beginning of the sixteenth century, a series of natural events spooked the Aztecs.

First, a comet streaked across the sky in 1509. Next, lightning that was unaccompanied by thunderstruck the towers of the temple that housed the Aztec principle god Huitzilopochtli. The bolt burst the tower into flames. It was destroyed.

Then, just as the Aztecs were completely spooked and expecting the return of a god they heard the stories of castles floating on the water and enormous beasts with 4 legs carrying bearded warriors. By the time the Spaniards arrived in Tenochtitlan the Aztecs had begun calling them Teules. Teules was the name for their religious idols.

The Spaniards, in 1519, were led by the fearless Cortes. Cortes was searching for riches. Motecuhzoma had his ambassadors meet Cortes on the road and offer him gold and textiles if he and his men would leave and go home. Instead.

Cortes went crazy when he saw all the gold. At the time all of the money in Spain was made out of gold and silver. Nothing could stop him when he realized that they were on the heels of a great and wealthy empire.

Shortly, after a group of Cortes’s men were killed by Aztecs, Cortes and his men decided to kidnap Montezuma and make him a puppet leader.