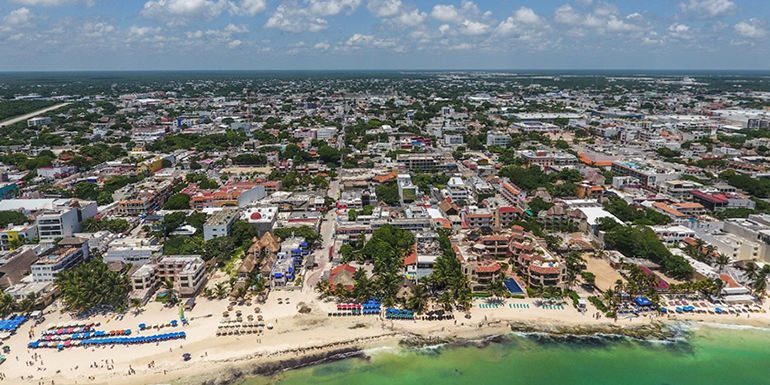 It is a popular tourist area in eastern Mexico. Playa del Carmen features a wide array of tourist activities due to its geographical location in the Riviera Maya. Playa del Carmen is a stop for several cruise ships which dock at the nearby Calica quarry docks, about six miles (10 km) south of the city.

Playa del Carmen is located within the Riviera Maya, which runs from south of Cancún to Tulum and the Sian Ka’an biosphere reserve. Playa del Carmen is an idyllic place with fine white sand and blue-green waters, you will always find a hammock and an umbrella to sunbathe and rest, especially in the edge of town that offers the quietest beach areas.

The town is ideally located: close to Cancún’s international airport, but far enough south to allow easy access to Cozumel, Tulum, Cobá and other worthy destinations. The reefs here are excellent, and offer diving and snorkeling close by. Look for rays, moray eels, sea turtles and a huge variety of corals. The lavender sea fans make for very picturesque vistas.

If you prefer action, in Playa del Carmen you will find water activities such as windsurfing, jet skis, kayaking or diving in the impressive Mayan coral reef.

The Xcaret Eco Park, a Mexican-themed “eco-archaeological park”, is a popular tourist destination located just south of the town in Xcaret.

It has also been the destination of PGA Tour golf tournaments and the set location for various television shows.

The climate of the municipality is warm subhumid with rains in the summer of higher humidity.
The average annual temperature is 25.8 ° C, the lowest temperatures are recorded in the month of January with 13 ° C and the maximum is reached in the month of August with 32.9 ° C.

The prevailing winds are those of the southeast.
Annual rainfall is at 1,331.2 millimeters with rainy season from June to November.

The climate is affected by cyclones or hurricanes, which increase precipitation especially in the summer. The hurricane season runs from June 1 to November 30 of each year. In October 2005, Hurricane Wilma passed directly over Playa del Carmen, remaining in the vicinity for two days and causing significant damage and a temporary drop in tourist arrivals.

Fortunately, most of the damage was relatively superficial and repaired within a few weeks of the storm. Hurricane Wilma arrived from the Caribbean Sea, passing over Cozumel before making landfall in Playa del Carmen. It then moved north along the Mexican coast, hitting Cancún especially hard.

It is currently stated that for this year 2018 there will be a total of around 500,000 inhabitants.

In pre-Hispanic times Playa del Carmen was called Xaman Há (“Water of the North”) and was a starting point for the Mayans on their pilgrimage to the Ixchel sanctuary in Cozumel.

During the sixteenth century the Spanish invaded and conquered most of the Mayan sites. However, unlike many others, Playa del Carmen never became a Spanish settlement.

With the arrival of the Spaniards in Mexico, it is recorded that Francisco de Montejo was the one who conquered this region in 1526, founding the town of Salamanca where Xel-Ha is currently located. Also, a year later, a lieutenant of Montejo, Alonso Dávila, established his camp in Xaman-Ha, which he described as a fishing village. Despite these events, this area remained very little inhabited during the entire period of the colony.

The founding of Playa del Carmen was due to a colonizing chicle company on the eastern coast of Yucatan, which in 1908 obtained from the government of Porfirio Diaz the concession to explore forest resources. This is when a community of fishermen, coconut producers and the chewing gum tree was located there.

Until the mid-1980s, Playa del Carmen was a small town with less than 1,500 inhabitants, although in the last two decades it has changed markedly with the growth of tourism.

Tourism to Playa del Carmen began with the passenger ferry service to Cozumel, an island across the Cozumel Channel and a world-famous scuba diving destination.

Tourist activity in Playa del Carmen centers on Quinta Avenida, or Fifth Avenue, which stretches from Calle 1 norte to Calle 40. A pedestrian walkway located just one or two blocks inland from the beach, Fifth Avenue is lined with hundreds of shops, bars and restaurants. There are many small boutique hotels on and just off Fifth Avenue and on the beach.

Playa del Carmen is host to several major annual events the largest being The BPM Festival, a world-famous electronic dance music festival which takes place in January each year.

It takes place at the end of January, there are shows and parades where they recreate the Mayan culture.

Feast of the Virgin of Carmen

It is celebrated in July, and is one of the most important events for the municipality of Solidaridad since it is the patron saint of the town. On this date, the Carmen Fair is also held to commemorate this celebration.

Playa del Carmen and Oaxaca sister cities by the Guelaguetza, in April it is hosted at the Civic Plaza July 28 at the Expo Guelaguetza in Playa del Carmen, where you can find handicrafts and products from Oaxaca and also enjoy music and dances typical of that region.

It takes place in November, it is a ritual where hundreds of canoeists sail from Xcaret to the sanctuary of the goddess Ixchel, in Cozumel. They travel to hear the message of their deity, to return to Playa del Carmen to transmit it to the Mayan people, who hope to know what the destination holds. The participants of this recreation make feel the spiritual value of the Mayan roots, paddling kilometers to reach their goal. Thousands of tourists are witnessing this spectacular event every year.

Years ago, in Cancún, people dreamed of strengthening a great musical festival in the offseason months, so that it would become an important alternative for tourism in those months when the flow of vacationers descended, such as the Period that goes from September to the beginning of December.

Cancun had its jazz festival and it was dreamed that it would be able to establish itself as a solid party to celebrate that musical genre in the Caribbean, and that it would be considered a promotional bastion of Cancun and its area of ​​influence, with a relevant capacity and to trigger the influx tour.

With artists of the highest quality Playa del Carmen, together with the state and municipal authorities, and the work of the Tourism Promotion Trust of the Riviera Maya, plus the good participation of hoteliers and tour servers, they were able to capitalize on the Riviera Maya Jazz Festival, as one of the most relevant meetings in the world of this musical genre, the festival has grown considerably, both in technology and in logistics and quality, in order to provide a better experience for the attendees; “This evolution represents a turning point for the jazz scene in Latin America.”

The capacity of organization of the Quintana Roo can be considered a pride, a similar path followed by other festivities that exist in the state, such as film festivals, and the great return of the Festival of Caribbean Culture, which is also expected to be eventually consolidate