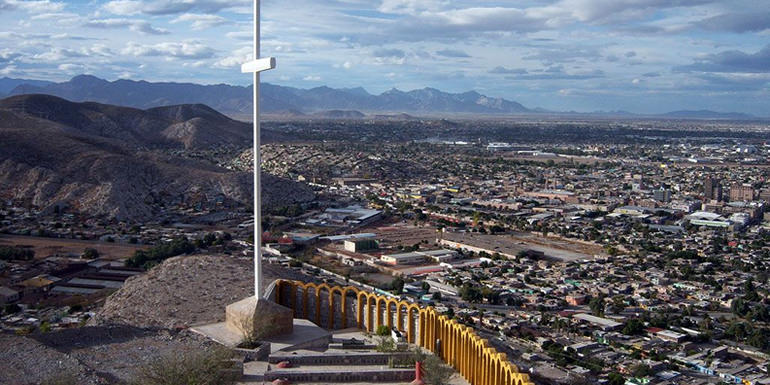 It is the ninth-biggest metropolitan area in the country and is one of Mexico’s most important economic and industrial centers. Torreón is served by Francisco Sarabia International Airport, an airport with flights to several cities in Mexico and the United States.

Torreón is near the southwest border of the state of Coahuila, within the Laguna region of the state. The border is delineated by the Nazas River that separates it from Gómez Palacio, Durango. The municipality covers 1,947.7 km2 (752.0 sq mi), including much of the rural area south of the city. Its elevation is over 1,000 m (3,280 ft), which is low for the Mexican interior. The terrain where the urban area is spread is generally flat, with somewhat prominent relief formations (up to 1,600 m (5,249 ft) south and southwest of the city, thus visible at well-nigh any given point in the city. Higher mountains, over 3,000 m (9,843 ft), are on the southern, mostly uninhabited section of the Municipality, the most prominent being El Picacho.

The cities of Torreón, Gómez Palacio, and Lerdo compose La Laguna (The Lagoon) or Comarca Lagunera, a basin within the Chihuahuan Desert, which has much economic activity. The name of the region stems from three nearby, and now dry lagoons, the Lagoon of Mayran, the Lagoon of Tlahualilo and the Lagoon of Viesca.

The region’s climate is arid: rainfall is scarce but more prominent in summer, whilst temperatures are very hot by day and cool at night, although the urban heat island effect causes temperatures on summer nights to be considerably warmer than nearby areas. Flora and fauna are those common to semidesert habitats.

The city is 56 km (35 mi) southwest of historic San Pedro de las Colonias, where some of the Mexican Revolution fighting occurred.

According to archaeological findings, the area of Torreón was populated around the 10th millennium BC.

The first Spanish mission arrived in 1566, led by Fr. Pedro Espinareda. However, the city developed only in the independent Mexican era, around a Torreón (“Big Tower”) built to monitor Río Nazas’s floods, in conjunction with the creation of a railroad connecting to the US border city of El Paso, which gave an economic boom to the city and therefore a population boom as well. The population grew from 200 in 1892 to 34,000 in 1910. Torreón received city status in 1907.

After the Mexican Revolution, the city continued to develop economically; during the first years of the 20th century the primary industry of the city was farming, although other industries later formed or were established in the area.

Cristo de las Noas, at 21.80 m (71.5 ft), is the third tallest statue of Christ in Latin America, only smaller than the statue of Christ The Redeemer in Brazil and Cristo de la Concordia in Cochabamba, Bolivia. Situated on the top of a hill, this image of Jesus with extended arms symbolises protection for the inhabitants of Torreon. The hilltop has a Catholic church and offers a view of the entire city.

There are also several shopping centers in the city, including Galerias Laguna, Plaza Cuatro Caminos and Intermall.

The “Canal de la Perla” (the Pearl Watercourse), an underground watercourse built in the 19th century to drive the Nazas’ river water to the fields near the city, was re-discovered in 2003 and re-opened in 2014. It now passes under the oldest part of the city and it can be visited and walked through. It is also used for cultural and artistic exhibitions.

In 2006, the “Museo Arocena” (Arocena Museum) that holds art collections from the pre-Hispanic times to the present, was opened; it also has a section dedicated to Mexico’s and Torreón’s history. There are also temporal expositions, conferences, book fairs, movies, and activities for children.

It takes place every Sunday, at the “Calzada Colón” (Columbus Roadway) the street is closed and families get together to ride bikes, see the musical and cultural performances, walk their pets or just walk around.

It takes place on September 15 and 16. There are celebrations all around the city, but the most important is the one celebrated in the Plaza Mayor. People wear traditional Mexican clothes, eat traditional dishes and “Antojitos”. At night the city mayor makes the traditional celebration of “El Grito”. The next day (September 16) there is a parade on the Morelos Avenue.