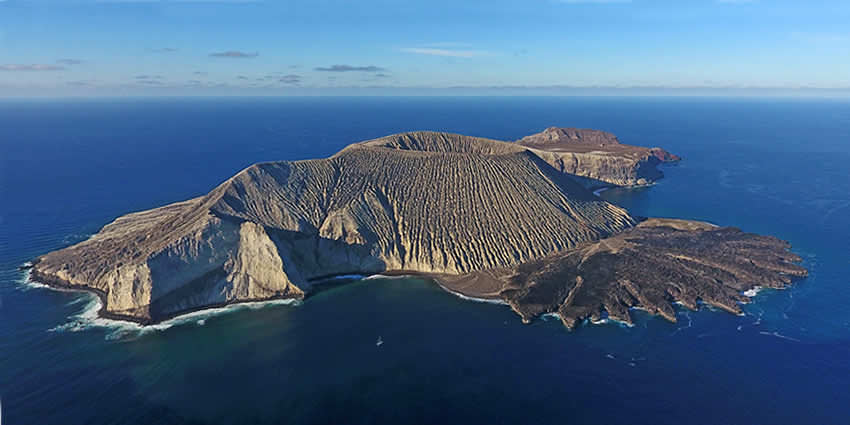 They lie approximately 390 km southwest of Cabo San Lucas, the southern tip of the Baja California Peninsula, and 720 to 970 km west of Manzanillo. Technically part of the Mexican state of Colima, the islands are under Mexican federal jurisdiction.

In July 2016, the Revillagigedo Archipelago was inscribed as a UNESCO World Heritage Site, and in November 2017 they were declared to be a marine reserve and a national park of Mexico.

Montículo Cinerítico (front) and Bárcena (behind), volcanic cones on San Benedicto, one of the Revillagigedo Islands. Bárcena has existed only since 1952. The total area is almost 158 sq km, spread over an east-to-west extent of about 420 km.

A naval station in the south of Socorro Island has a population of 45 (staff). On Clarión is a small naval garrison with 9 men.

The islands are otherwise uninhabited.

The islands are named after Don Juan Vicente de Güemes, 2nd Count of Revillagigedo, the 53rd viceroy of New Spain.

The three eastern islands are called the inner islands.

They fall in the time zone UTC-7 (Mountain Time), while the major part of Colima is UTC-6 (Central Time Zone). Clarión is comparatively far to the west, by more than 200 km in comparison with the inner islands, and in UTC-8 (Pacific Time Zone).

The Revillagigedo Islands are one of three Mexican island groups in the Pacific Ocean that are not on the continental shelf; the others are Guadalupe Island and Rocas Alijos.

No evidence of human habitation on Socorro exists before its discovery by Spanish explorers.

Hernando de Grijalva and his crew discovered an uninhabited island on 19 December 1533 and named it Santo Tomás (Socorro Island) and on 28 December they discovered Isla de Los Inocentes (San Benedicto) which owed its name to having been found on the day of the Holy Innocents.

In November 1542, Ruy López de Villalobos, while exploring new routes across the Pacific, rediscovered Inocentes and Santo Tomás and charted the latter as Anublada (“Cloudy”). Villalobos was the first to report sightings of Roca Partida Island giving it its present-day name.

In 1608, Martín Yánez de Armida, in charge of another expedition, visited Anublada and changed its name to Socorro.

In 1779 José Camacho was the first to report a sighting of the island remaining, which he charted as Santa Rosa (“Saint Rose”). Santa Rosa was later renamed Clarion after the vessel commanded by Henry Gyzelaar at that time.

The Revillagigedo Islands have been visited by a number of other explorers:

On 25 July 1861, President Benito Juárez signed a decree awarding territorial control over the four islands to the state of Colima. His plan was to build an offshore penitentiary on Isla Socorro; although this never happened, the decree whereby they were attached to Colima has never been repealed.

In 1865, the island was explored by ornithologist Andrew Jackson Grayson, who discovered the Socorro dove, Socorro mockingbird, and the Socorro elf owl which were later given scientific names in his honor.

At the beginning of the twentieth century, Dr. Barton Warren Evermann, director of the California Academy of Sciences in San Francisco, California, promoted the scientific exploration of the islands. The most comprehensive biological collections were obtained at this time.

The volcano on Isla Socorro was renamed in his honor.

In 1957 the Mexican Navy established a naval base on Socorro and has had a permanent presence on the island since then. A tiny outpost also exists on Clarión, as noted above.

On 21 March 1972, Pablo Silva García became the first Governor of Colima to visit his state’s island territories. A plaque was unveiled to mark the event and cement Colima’s claim.

The seas surrounding the larger islands are popular with scuba divers.

A variety of marine life such as cetaceans, sharks, and manta rays can be observed. Visitors usually stay aboard expedition vessels during their visit to the islands, which is desirable from an ecological standpoint to prevent the introduction of further invasive species.

The islands are occasionally visited by amateur radio operators, who usually use the ITU prefix XF4. Because of their distance from the mainland, for award credit, they are considered to be an “entity” separate from Mexico.

Expeditions from organizations engaged in biological conservation of the islands visit the islands for fieldwork on a regular basis.

No tourism facilities exist; the islands have no reliable sources of freshwater of their own.

The Revillagigedo Islands are home to many endemic plant and animal species, and are sometimes called Mexico’s “little Galápagos”. They are recognized as a distinct terrestrial ecoregion, part of the Neotropic ecozone.
Socorro is the most diverse in flora, fauna, and topography.

The Mexican Government established the islands as a Biosphere Reserve on June 4, 1994.

According to the World Wide Fund for Nature (WWF), 14 of the islands’ 16 generally accepted resident taxa of land birds as well as one seabird are endemic, as are all of the islands’ native terrestrial vertebrates.

The latter, however, consists only of a whip snake, a night snake, and two Urosaurus iguanids.

Numerous seabird taxa breed no further north(east)wards than San Benedicto; storm petrels are notably absent as breeders though they breed in the region and visit the islands to forage.

Albatrosses are also not normally found here. Among land birds, the absence of the house finch, widespread on northeastern Pacific offshore islands, is the most conspicuous one.

Apart from the native birds, migrant shorebirds and others are often found on the islands.

Bahia Azufre (Sulfur Bay) on Clarión seems to be a favorite stopover location, as it is one of the few long stretches of beach on the islands; mostly, the shoreline is steep cliffs. The archipelago is also a part of wintering grounds for humpback whales in the north pacific.

Socorro has numerous endemic plant taxa, whereas Clarión which is farthest from land has but a few.

The San Benedicto ecosystem was nearly wiped out in the devastating eruption of Bárcena volcano on August 1, 1952, but has since recovered; apparently, just the San Benedicto rock wren became entirely extinct.

Most if not all native plants found on San Benedicto today are shared with Clarión, not with the closer Socorro to the south, due to the prevailing winds and ocean currents. The native flora of Clarión is about equally shared with other large islands.

As opposed to the interchange between the islands, the animals and plants that colonized them initially are apparently all from mainland populations generally to the northeastward of the Revillagigedos.

Plants are most often derived from Baja California founder populations, whereas the endemic nonavian reptiles seem to be rather derived directly from mainland populations of the Sonora-Sinaloa area.

The ancestors of the islands’ terrestrial birds probably came from the general area of southern North and northern Central America.

As illustrated by the fact that no endemic land bird taxon occurs on more than one island and the cases of the Socorro and Clarión wrens as well as the Socorro dove and Clarión mourning dove, each bird population seems to have arisen independently.

“The future of the avifauna of the islands appears to be secure at present. There are no human inhabitants, and no mammals of any kind except the moderate and apparently stable population of sheep on Socorro.”

The unique ecology of the islands has since then come under threat from these and other exotic species. Sheep were introduced to Socorro in 1869, and cats have become established after 1953, probably in the early 1970s.

Pigs were introduced to Clarión in 1979, and rabbits became feral at some earlier date.

The Socorro dove is now extinct in the wild but is being bred in captivity. The elf owl’s Socorro subspecies Micrathene whitneyi graysoni appears to be extinct. Other plant and animal taxa in the archipelago are also considered threatened or nearly so.

A number of conservation initiatives are dedicated to halting the destruction of the native ecosystems of the islands.

Dr. Harmunt Walter of the University of California, Los Angeles (UCLA) and Dr. Luis F. Baptista of the California Academy of Sciences have coordinated breeding and reintroduction efforts for the Socorro dove since 1988, through the Island Endemics Institute.

The Comité Científico para la Conservación y Restauración del Archipiélago Revillagigedo (“Scientific Committee for the Conservation and Restoration of the Revillagigedo Islands”) was founded in 1996 and is a committee representing several organizations, including the Island Conservation & Ecology Group, Island Endemics Institute, the University of Missouri–St. Louis (UMSL), the National Autonomous University of Mexico (UNAM), and others.

It is chaired by Dr. Walter and Dr. Luis Medrano of UNAM is its secretary.

The committee has been advocating the removal of the exotic species from the islands, especially the estimated 2000 sheep on Socorro, to allow the islands’ ecology to recover, and the adoption of a management plan to promote the recovery of the island’s native species, including the reintroduction of the Socorro dove.

Brattstrom and Howell who gave the optimistic outlook in 1956 went on to caution that “it may be hoped that the Mexican government will guard against the introduction of mammals such as rabbits, cats, goats and others that have invariably brought disaster to the flora and fauna of insular regions.”

On 25 November 2017, President of Mexico Enrique Peña Nieto acted to protect the biodiversity of the region by creating North America’s largest marine protected area around the islands and prohibiting mining, fishing, and tourism development on or near the islands.