Things to do in enchanting Guanajuato City 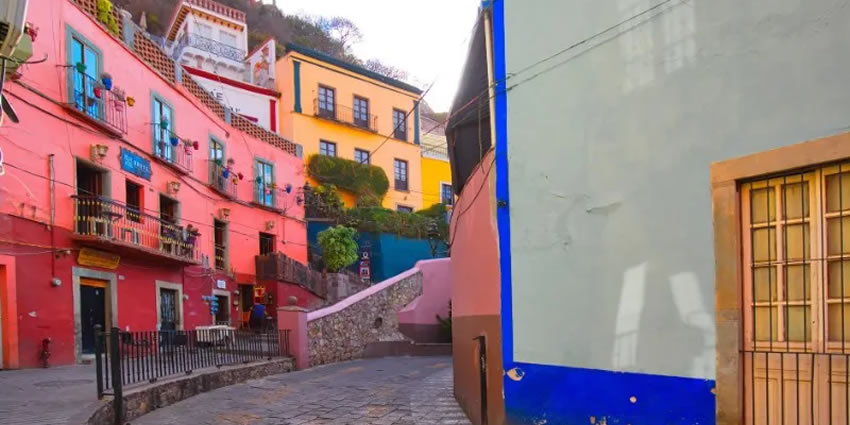 Guanajuato is a UNESCO-listed city that many have called the prettiest in all of Mexico with its vibrantly painted buildings spilling down the hillsides. Set in the heart of the highlands,  the leafy plazas, colorful architecture.

Guanajuato is a city with a rich history and culture to explore. Guanajuato residents are friendly and there’s a wide range of things to see and do, with these options are the top to put on your must-experience list.

Wander the Streets and Alleyways in Guanajuato

One of the top things to do is to simply wander the centuries-old alleyways, and enjoy the twists and turns that bring all sorts of delights, including magnificent baroque buildings.

The center of the city is pedestrian-friendly as there are only a few streets where cars are permitted.

The labyrinth of walkable streets and colorful lanes is idyllic without exhaust fumes, loud horns, and vehicles to watch out for while discovering picturesque plazas and all sorts of enticing attractions.

Guanajuato has its own interesting Romeo and Juliet story.

This is the local legend telling that the daughter of a wealthy family who lived in one of the buildings tucked in the skinny alleyway behind the Plaza de Los Angeles fell in love with a young man from the “wrong side of the tracks”.

The girl’s bedroom looked out onto the alley, and the man had a window that looked out directly across. They would secretly meet to steal a kiss, but the girl’s father found out and in a fit of rage, stabbed her to death.

The tragic ending to their short love story forever changed the identity of the alley, which is now known as the Alley of the Kiss.

Today, a small gift shop sits within what’s said to be the girl’s old room, and many come to hang love locks from the balcony bars while stopping for a kiss.

Take in Spectacular City Views from the Funicular

Guanajuato has a dual funicular system that makes it easy to reach its Pipila Monument lookout point, and it’s also worth riding to take in some of the best views overlooking the city ascending 335 feet.

If you board at the back, you’ll have the perfect vantage point, looking down over it all as it rises.

One of the popular ways to enjoy this funicular system is to ride the funicular one way up and then stroll back down through the maze of tight cobbled alleyways of Guanajuato.

Explore a Historic Silver Mine in Guanajuato

Guanajuato’s fortunes were built on the riches of the silver veins that were discovered deep beneath the city, and today, multiple mines can be toured by strapping on a hard hat.

The La Valenciana Mine was the deepest and most extensive mining network in the region, extracting vast amounts of silver, making it one of the best to tour.

The surface side of the mine was restored to its glory during the peak of silver mining operations of the 17th century, providing visitors the opportunity to be guided down into the 227 feet of the mine.

Visit the Mummy Museum in Guanajuato

The Museo de las Momias de Guanajuato, or Mummy Museum, features more than 100 mummies that formed naturally in the local cemetery, known as one of the creepiest yet most fascinating places in Mexico.

The mummies were exhumed between 1865 and 1989 and are believed to have been preserved due to a combination of factors such as the dry climate and high altitude.

The wooden coffins may have absorbed any moisture, while sealed cement crypts protected the bodies from organisms that would have led to their decay.

The mummies displayed were all local residents, living during the period between 1850 to 1950 – even some of their clothing has remained intact.

Take a Food Tour in Guanajuato

Mexico is famous for its mouthwatering cuisine, and Guanajuato is no exception.

One of the best ways to sample a variety of the best is by taking a tour of its street foods and markets.

Everything from authentic local “sopes” and “gorditas” to “tacos” and “tamales”, as well as fantastic Mexican coffee and homemade ice cream, are worth trying while you’re in Guanajuato.

The Diego Rivera Museum sits in the home of the country’s most famous artist, Diego Rivera.

The city of Guanajuato was his birthplace, and the museum shows what his home was like at the time of his infancy, including the very brass bed he was born in, while also displaying his works.

Rivera’s tempestuous affair and marriages with fellow artist Frida Kahlo, scandalous lifestyle, and controversial communist politics are all reflected in many of his paintings.

Basílica de Nuestra Señora is one of the most iconic landmarks in the city, a towering baroque-style church built in the late 1600s.

You can peek in to see its famous jewel-covered image of the Virgin, patron of Guanajuato.

The wooden statue is said to have remained hidden from the Moors in a cave in Spain for 800 years, given to the city by Felipe II of Spain as thanks for the wealth it provided to the crown, the result of its silver mining industry.

The temple has three entrances, a belfry with three towers, and another tower in Churrigueresque style. Part of the church is dedicated to the patron saint of miners, San Nicolas Tolentino.

Take a Hike in Guanajuato

Just a 20-minute walk through the narrow alleyways will bring you to the rural edge to take advantage of some outstanding hiking opportunities like La Bufa. The path is wide and flat after the initial hike up, making it easy for most.

You’ll pass three important geological formations in less than a mile, and at the top, you’ll be able to take in a breathtaking panoramic view over the city and well beyond.

While there are multiple markets in town, the largest is Mercado Hidalgo. It’s a must-visit for mingling with the locals and buying anything from cheese, meats, and fresh fruit to clothing and handmade crafts.

Mercado Hidalgo in Guanajuato is a great place to dine too, with plenty of food stands to choose from – the clue to finding the best is to look for a long line as the locals know it’s worth the wait.

The Art and History Museum, Alhóndiga de Granaditas, has had multiple incarnations, originally a grain storehouse before becoming a Spanish fortress followed by an armory and prison.

It was also the site of bloody battles and the first victory over the Spanish during the War Of Independence in 1810.

Inside, you’ll see gorgeous murals above the staircase along with numerous exhibits highlighting events up to and following the war. It showcases many works of art and artifacts, including textiles, furniture, and paintings.

This is a definite must for any art or history enthusiast.

There may be no better way to experience this city like a local than by attending a baseball game.

The city has its own team, part of the small municipal league that keeps the local crowd entertained.

Admission is around the price of an ice cream cone and includes access to seats right behind home plate to cheer on the home team among a colorful backdrop.

You can find out when they’re playing by checking out the schedule at the ticket booth.

The scoreboard is changed the old-fashioned way, by hand, and there’s a guy in the stands taunting the away team with sirens when an opposing member is up at bat.

Search for the Frogs

Guanajuato was named by the indigenous people, translating to the “Land of Frogs.”

The city has many frog sculptures throughout the town, making it fun just to try and find them all, especially if you happen to be a frog lover. Much of the quirky statues can be found on Guanajuato’s main streets, but there are also narrow alleyways and small side streets that also boast must-see pieces.

As many people visiting this area of central Mexico head to San Miguel de Allende, popular among expats, it’s also well worth a visit while staying in Guanajuato, just an hour’s drive away.

It’s home to majestic colonial architecture and cobbled streets, with many attractions, including hot springs.

At La Gruta (the Grotto), you can soak in hot water that gushes from a tube high up in the wall of a rocky cave, approached via a dark tunnel, with steamy, chest-deep water at the end.

Many line up for the chance to enjoy a natural water massage on their heads and shoulders. There are also a number of eateries, a boutique, bar, lap pool, and a large temescal (traditional Mexican steam bath) with mosaics built in.