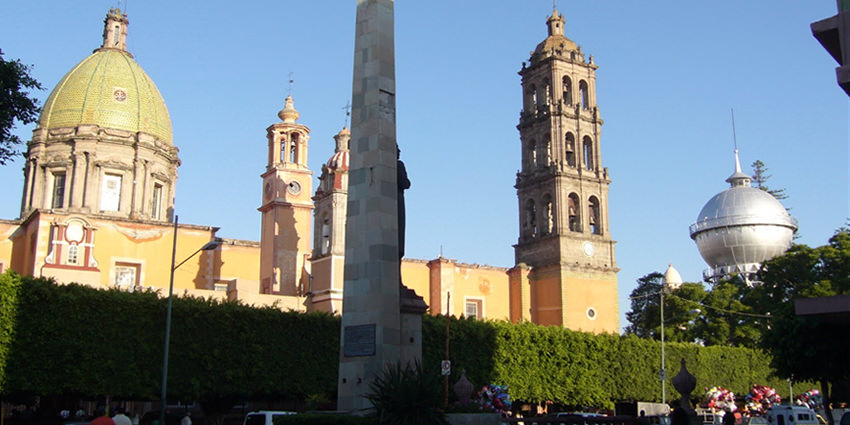 Celaya is a city and its surrounding municipality in the state of Guanajuato, Mexico, located in the southeast quadrant of the state.

Celaya is the third most populous city in the state, with a 2005 census population of 310,413.
The municipality for which the city serves as municipal seat, had a population of 415,869.

The city is located in the geographic center of the municipality, which has an areal extent of 553.18 km² (213.58 sq mi) and includes many smaller outlying communities, the largest of which are San Miguel Octopan, Rincón de Tamayo and San Juan de la Vega.

Celaya was also the Guanajuato state capital for a short period.

An explosion in a gunpowder and fireworks warehouse in September, 1999, killed over 60 people and injured over 300 people.

Celaya is also famous for the artisanal production of cajeta, a type of milk candy

Celaya was a frontier region between the Purépecha and the Chichimecas.

The first settlers of this place were Otomíes and Chichimecas.

In the the year of 1565 it was called the town of Apaseo (Mezquital de Apaseo).

The extensive huizacheras that extended to the south, Spaniards called Zalaya (“flat land” in vascuence language).

So we can see that from the first time began to coexist two dominant forms: Zalaya, with “z” and Selaya with “s”.
There were also other variants of spelling: Zalalla, Zelaia and Zelaída.

The denomination of Celaya, has opted for the flow of generations of neighbors and even strangers who have contributed to provide a fundamental feature of the city, as it is precisely the name that, ultimately, represents the conceptual essence of identity, that by addition and reward, back in the dawn of the 18th century, he earned the poetic nickname of La Puerta de Oro del Bajío.

The Ball of Water reservoir has been a city icon since 1908; it continues to supply water to portions of downtown.

The tank was manufactured in Germany and assembled on site, and is unique in being assembled using rivets rather than welds.

It is believed to be the only one of its kind with a spherical shape (it is rumored that there was another similar water ball in Stuttgart, Germany that was destroyed during the Second World War).

Traditionally, locals tell visitors that it is filled with cajeta, taking them to visit the “Bola del Agua” on Sundays, the traditional day for visiting the Independencia Lane.

A plaque at the base of the water tower features the legend (in Spanish):

“This tower was built at the expense of the city municipality in 1910 and officially opened on 15 September, the day of the anniversary of the proclamation of the independence of Mexico as a state governor Mr. Don Joaquín González Obregón, who gave full moral support to the construction.’s work and everything related to the provision of drinking water, was designed and conducted by the district political head Mr. Don Perfecto I. Aranda, its total cost, including piping limited to two circuits, was $ 161,520.84 (mexican old) pesos”.

The work was carried out under the command of German Enrique Schöndube, although it is known that payment for the construction took ten years due to the start of the Mexican Revolution, so it was paid once the new government established.

During the Mexican Revolution, Villa’s officers thought the hydraulic tower had such a large amount of water that destroying it would drown the population of Celaya. One of Villa’s generals ordered his artillery to destroy it. Captain Gustavo Duron, in charge of a 75mm battery, followed the orders but shot around the tower, avoiding it and protecting the monument, as mentioned by local historian Herminio Martínez.

The construction resulted in the neglect of the people handing out water at home from the mayor’s office called water carriers.

Commercial advertising on its surface was allowed for several years to cover the costs of the reservoir, ending on September 8, 1980 when, in celebration of upcoming 410th Anniversary of the Foundation of Celaya, the mayor in charge decreed that the Ball of Water would be a symbol that would represent the city, and the placement of advertisements was banned.