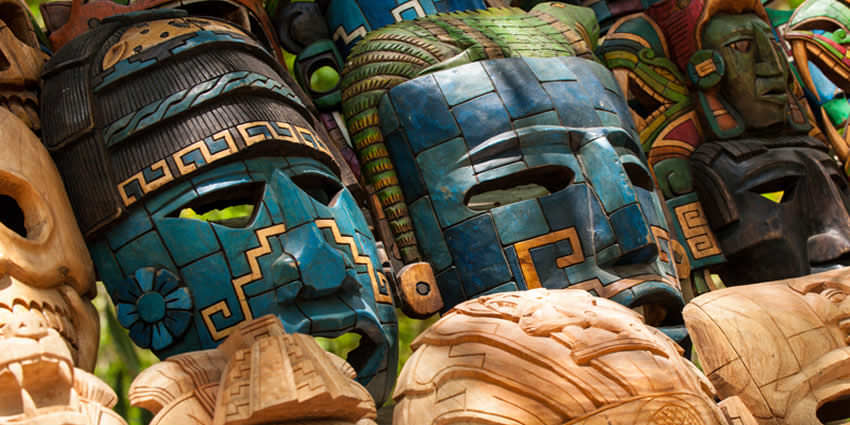 A Symbol of Divinity.

Mayan masks were representations of Mayan gods, as well as part of a very sacred funeral ritual in the Mayan Classic Period from 250 to 900 AD. These were placed over the face of an important ruler when he died.

Mayan masks endowed the rulers with the status of a divine being as the “Tree of the Universe”.

The funeral masks protected them while descending into the underworld “Xibalba” in order to defeat the gods of death and to be able to ascend as the Mayan “God of the Corn”.

Mayans perceived, and still do, a life continuum after leaving the physical body.

Even during his lifetime, the ruler had the duty to be the interlocutor between men and the gods, asking them to intervene in the well being of his people.

The Mayan writings of the Popol Vuh state that the Mayans originated from a corn cob, therefore the importance of corn becomes quite understandable, as well as corn has since ancient times been the most important element of nourishment in Mesoamerica.

Funeral masks were elaborated with the greatest skill in Mayan art, assembling them in form of mosaics of jade, which was considered by the Mayans to be the most precious stone, and combined them with turquoise, mother of pearl and obsidian.

However, not all the jade masks were for sacred funeral rituals. Mayans made smaller masks that were part of the ceremonial belts and pectorals of the Mayan king.

During the Classic Period the Mayans performed the cranial deformation on the children of the governingmayan mask class. This deformation resembled a corn cob, and it also produced the squint eyes, a Mayan symbol of beauty and divinity.

This deformation and the squint eyes are also represented on the masks.

Archaeologists have found around thirty masks in Mexican territory, and about thirteen of them have been restored. Eight of them were identified as each one belonging to a high ranking Mayan person. The other 5 represent images of Mayan gods.

One of the beautiful funeral masks belonged to the famous king Pakal of Palenque in the state of Chiapas, Mexico.

In addition to Alberto Ruz L´Huiller´s discovery of the amazing tomb of Pakal in Palenque, Mexican archaeologist Fanny López made one of the most extraordinary findings in the Maya civilization in 1994.

Fanny López discovered the of tomb of the The Red Queen inside Temple XIII of Palenque, which is near the Temple of the Inscriptions.

The skeleton of The Red Queen has been the only one found of a noble Mayan woman buried in a sarcophagus inside a Mayan Temple.

The Red Queen mask was made of malachite, and the bones of her body were all covered with red cinnabar as the ones of Pakal.

Along with these masks the ruler was attired with precious Mayan jewelery like rings, necklaces and pectorals, and surrounded by innumerable offerings, Mayan pottery and inscriptions with Mayan glyphs, which were all recovered from the respective tombs.

Mayan masks used in funerary rituals and those made of stucco are full of Mayan glyphs and Mayan symbols that reveal the relation that Mayans had, and still have, with the supernatural realm.

As epigraphists decipher more and more of the Mayan glyphs, we are going to continue being amazed withwood mayan masks the wisdom and knowledge of the Mayans and their cosmovision.

You can admire the beautiful mayan masks in several archaeological sites, Mayan pyramids and Museums located at the sites or in the main cities of the Yucatan Peninsula and Chiapas, as well as in the Museum of Anthropology and History in Mexico City.