The Basilica of Guadalupe 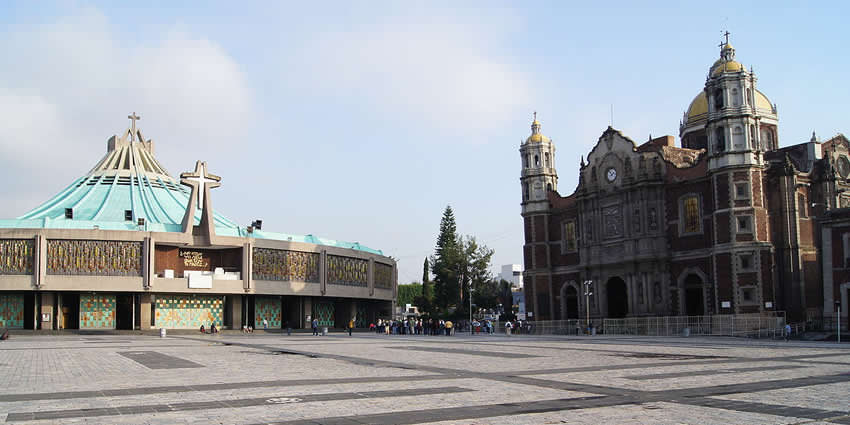 The Basilica of Our Lady of Guadalupe (Basílica de Nuestra Señora de Guadalupe) is a roman catholic church, basilica and National shrine of Mexico in the north of Mexico City.

The shrine was built near the hill of Tepeyac where Our Lady of Guadalupe is believed to have appeared to Saint Juan Diego Cuauhtlatoatzin.

This site is also known as La Villa de Guadalupe or, in a more popular sense, simply La Villa, as it has several churches and related buildings.

The new Basilica houses the original tilma (or cloak) of Juan Diego, which holds the image of Our Lady of Guadalupe.

One of the most important pilgrimage sites of Catholicism, the basilica is visited by several million people every year, especially around 12 December, Our Lady of Guadalupe’s Feast day.

A nearby chapel was built on the sacred site devoted to a temple for Tonantzin Coatlaxopeuh, an important mother goddess, after the Spanish conquerors destroyed the temple.

Pilgrimages have been made to this shrine almost uninterrupted since 1531-32. In the latter year, a shrine had been constructed at the foot of Tepeyac Hill, which served the people for ninety years. It was adapted as part of the parochial sacristy of the new basilica.

In 1622 a rich shrine was erected; a newer one, much richer, in 1709. Other structures of the eighteenth century connected with it are a parish church, a convent and church for Capuchin nuns, a well chapel, and a hill chapel.

About 1750 the shrine got the title of collegiate, and a canonry and choir service were established. In 1754 it was aggregated to the Basilica of St. John Lateran.

In 1904 it was designated as a basilica.

The Legend of Guadalupe

For more than three hundred years, the virgin Mary of Guadalupe has been celebrated and revered in Mexico as the patroness of mexican and indian peoples, and as the queen of the Americas.

She stands on home altars, lends her name to men and women alike, and finds herself at rest under their skin in tattoos. Guadalupe’s image proliferates on candles, decals, tiles, murals, and old and new sacred art. Churches and religious orders carry her name, as do place names and streets. Far from vulgarizing her image, these items personalize her and maintain her presence in daily life. She is prayed to in times of sickness and war and for protection against all evils.

The legend of Guadalupe begins in december 1531 in Tenochtitlan (Mexico City) when the Virgin Mary appeared four times to the indian peasant Juan Diego. He was on his way to mass when a beautiful woman surrounded by a body halo appeared to him with the music of songbirds in the background. As the birds became quiet, Mary announced “I am the entirely and ever virgin, saint Mary”. Assuring Juan Diego that she was his “compassionate mother” and that she had come out of her willingness to love and protect “all folk of every kind, she requested that he build a temple in her honor at the place where she stood, Tepeyac Hill, on the eastern edge of Mexico City. (This spot has been identified as the site where once stood a temple to the aztec goddess Tonantzin.)

Juan Diego went directly to the bishop of Mexico, Zumarraga, to relate this wondrous event. The churchman was skeptical and dismissed the humble peasant, who then returned to Tepeyac Hill to beseech the Virgin Mary to find a more prominent person who was less “pitiably poor” than he to do her bidding. Rejecting his protestations, the virgin urged him to return to the bishop and “indeed say to him once more how it is I myself, the ever virgin saint Mary, mother of god, who am commissioning you.”

Juan Diego returned to the churchman’s palace after mass, waited, and was finally able to enter his second plea on behalf of the virgin. This time, Zumarraga asked the humble native to request a sure sign directly from the “heavenly woman” as to her true identity. The bishop then had some members of his staff follow Juan Diego to check on where he went and whom he saw.

The next day, Juan Diego hastened to the bedside of his dying uncle, Juan Bernadino. The old man, gravely ill, begged his nephew to fetch a priest for the last rites of the church. The following morning, before dawn, Juan Diego set off on this mission. He tried to avoid the virgin because of his uncle’s worsening condition, but she intercepted him and asked “Whither are you going?” He confessed that it was on behalf of his uncle that he was rushing to summon a priest. During this third meeting, she assured him that the uncle was “healed up”, as she had already made a separate appearance to him. This visitation would start a tradition of therapeutic miracles associated with “our lady of Guadalupe”. She also comforted Juan Diego with the assurance that she would give him sure proof of her real identity.

On december 12, 1531 the virgin appeared to Juan Diego for the fourth time and bade him to go to the top of Tepeyac Hill and pick “Castilian garden flowers” from the normally barren summit. She helped him by “taking them up in her own hands” and folded them into his cloak woven of maguey plant fibers. Juan Diego then set off to Zumarraga’s palace with this sure sign of the virgin Mary of Guadalupe’s identity. As he unwrapped his cloak, the flowers tumbled at the churchman’s feet, and “suddenly, upon that cloak, there flashed a portrait, where sallied into view a sacred image of that ever virgin holy Mary, mother of god.”

This imprint of the Virgin Mary of Guadalupe, the “miraculous portrait” as it is often called, hangs today in the Basilica of Gudalupe in Mexico City.

Since then Juan Diego never saw his halo woman again, but fortunately for the churchmen, the legend managed to spread and become popular, and until now almost all mexicans still believe in this old legend.

It’s difficult to say what really happened, whether the Spanish fooled the Indians or visaversa. And who did the Mexican’s ancestors pray to in the temple built on the sacred spot of the goddess Tonatzin.. We will probably never know that.

However, it’s obvious that timing for the vision of Juan Diego was perfect for the church. And in the end of the day, it was indifferent wich celestial chancellery did the brand-new christians send thier prays to, as chatolicism was successfully taking footholds in Mexico..

Officially known as the “Templo Expiatorio a Cristo Rey,” the first structure of the old basilica was begun in 1695 and it was not finished until 1709. The major architect was Pedro de Arrieta. It is characterized by its doric interior and marble statues of Fray Juan de Zumárraga, archbishop at the time it was started, and Juan Diego, the peasant who saw the vision of the Virgin Mary. These are featured in the altarpiece that originally held the image of Our Lady of Guadalupe. (That altarpiece matches a similar one in the older chapel higher on the hill, which features the archangels Gabriel and Michael). The church was granted basilica status by Pope Pius X in 1904.

The icon of Juan Diego’s cloak was housed in this church from 1709 to 1974. In 1921 a bomb planted in a flower vase near the altar by an anticlerical terrorist exploded, causing great damage to the interior of the building. (In memory of this incident, the New Basilica displays an iron crucifix called “the attempt on Christ”.) The cloak survived undamaged.

As much of Mexico City was built on a former lake, the land was unstable and the old basilica was sinking. A new, more spacious basilica was built. The old one was closed for many years and repairs have recently finished. It is open to the public and perpetual adoration is held there. It is a very important place for Mexico City.

The present church was constructed on the site of an earlier 16th-century church that was finished in 1709, the Old Basilica. When this basilica became dangerous due to the sinking of its foundations, a modern structure called the New Basilica was built next to it; the original image of the Virgin of Guadalupe is now housed in this New Basilica.

Built between 1974 and 1976, the new Basilica has a circular floorplan so that the image of the Virgin can be seen from any point within the building. The circular structure is 100 meters (330 ft) in diameter and can accommodate up to 10,000 people.

The choir is located between the altar and the churchgoers to indicate that it, too, is part of the group of the faithful. To the sides are the chapels of the Santisimo and of Saint Joseph. It has 9 chapels on the upper floor.

Under the main floor are the Basilica’s crypts, with 15,000 niches and 10 chapels. Its seven front doors are an allusion to the seven gates of Celestial Jerusalem referred to by Christ.

In the Sanctuary grounds where the new Basilica is located there are also many other buildings, including the original chapel on the exact site of the apparitions to Juan Diego (Capilla del Cerrito) and the Old Basilica consecrated in 1709, as well as other chapels where Masses and other sacraments of the Church are celebrated daily.