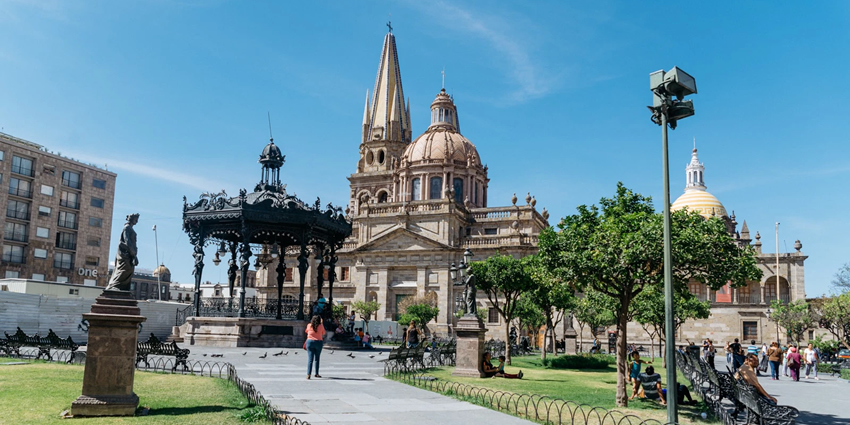 Guadalajara is an enormous metropolis, which is known as the “Pearl of the West”.

Guadalajara is known for its excellent quality of life and its extensive offer of leisure, culture, and gastronomy, as well as combines modernity with tradition and maintains some of the most representative symbols of Mexico such as tequila and mariachi.

Although one full day is enough to see its main attractions, we recommend spending the night in the city and investing time in getting to know some of the wonders of the surroundings such as the Tonalá artisan market and the colonial town of Tlaquepaque.

This list of the best places to visit in Guadalajara is perfect for getting to know all the points of interest in the capital of the state of Jalisco and making the most of your time.

You can start your visit in the Plaza de Armas, presided over by the Cathedral and the heart of the historic center, considered the most emblematic and ancient monument to see in Guadalajara.

Built in the 16th century and rebuilt after suffering various collapses due to earthquakes, this magnificent Baroque-style church surprises with its two neo-Gothic towers crowned with yellow tiles and the precious chapels and main altar.

Under the altar, there is a crypt where several bishops rest and several secret tunnels that were used as a refuge during the religious persecution known as the Cristero War.

In addition to visiting the cathedral during the day, it is worth visiting at dusk to see its magical lighting.

Roundabout of the Illustrious Jaliscienses

A few meters from the Cathedral and surrounded by trees, is the Rotunda de Los Jaliscienses Ilustres, a stone ring-shaped structure supported by 17 columns that has the legend “Jalisco to its enlightened children” engraved on it.

Inside this roundabout there are 98 urns with the remains of illustrious people from all over the state and in the surroundings, there are up to twenty-two statues of the most outstanding characters in the history of Jalisco.

Continuing in the heart of the historic center, formed by the 4 squares that surround the Cathedral and known as “Cruz de Plazas”, is the imposing State Government Palace, another of the most interesting places to visit in Guadalajara.

In this palace from 1790, the current seat of the state government of Jalisco, slavery was declared abolished in New Spain and stands out for housing the fantastic murals by the renowned Mexican artist José Clemente Orozco.

The Degollado Theater, built in the mid-19th century in honor of General Santos Degollado in a neoclassical style, following the influence of the Italian theater, is another of the most beautiful buildings and one of the great cultural references of Guadalajara.

Its portico with 16 columns and a marble relief, with the image of Apollo and the nine Muses, reminiscent of a classical Greek temple, gives way to a hall that will lead you to a beautiful main room where the Philharmonic Orchestra of Jalisco.

Learn about the history of the city and the state of Jalisco by visiting the Regional Museum, located very close to the Plaza de la Liberación, where the Legislative Palace and the Palace of Justice are located, is another of the best things to do in Guadalajara.

Built at the end of the 18th century, this imposing building that occupies an entire block stands out architecturally for its Baroque façade, its beautiful interior patios, and its monumental staircase.

In addition to knowing the history of the city, during the visit to the different rooms inside the museum, you can see from petrified fossils, and different archaeological pieces, to a valuable pictorial collection.

Leaving the museum you can take a walk along Calle Morelos past Plaza Tapatía and the Fuente de Los Niños Meones until you reach the Mercado San Juan de Dios, another of the places to see in Guadalajara.

Hospicio Cabañas, one of the places to visit in Guadalajara

Near the market is the Hospicio Cabañas, which at the time was one of the best orphanages in Latin America and was declared a World Heritage Site by Unesco.

This neoclassical building, built between 1801 and 1810, housed orphaned, elderly, and homeless children for more than a century until it was used as a barracks during the War of Independence.

Currently, it works as a museum showing the murals of the renowned artist José Clemente Orozco as well as hosting modern and contemporary art exhibitions.

Having some snacks or tequila on one of the terraces of the picturesque Plaza de Los Mariachis while listening to live music or enjoying regional dances is another thing to do in Guadalajara.

This square, located on the emblematic Calzada de la Independencia, is surrounded by old mansions that house numerous bars and restaurants on the ground floor, perfect for spending a fun night.

Another of the best experiences in Guadalajara, especially for shopping lovers, is to go by tourist bus to San Pedro Tlaquepaque, located 8 km from Guadalajara’s center, which is one of the most important craft centers in Mexico.

To finish this list of places to visit near Guadalajara, we suggest you visit the Tonalá Handicraft Market on a Thursday or Sunday, at which time all the stalls are set up and all the stores are open.

Tonalá is part of the Guadalajara metropolitan area. Once in Tonalá, you can wander aimlessly through the alleyways where craft stalls, many of them made with clay, are interspersed with food stalls.

If you have more time, you can take one of the excursions best and thus get to know other essential places to visit near Guadalajara, such as the cozy magic town of Tequila, Lake Chapala, and the Guachimontones archaeological site.