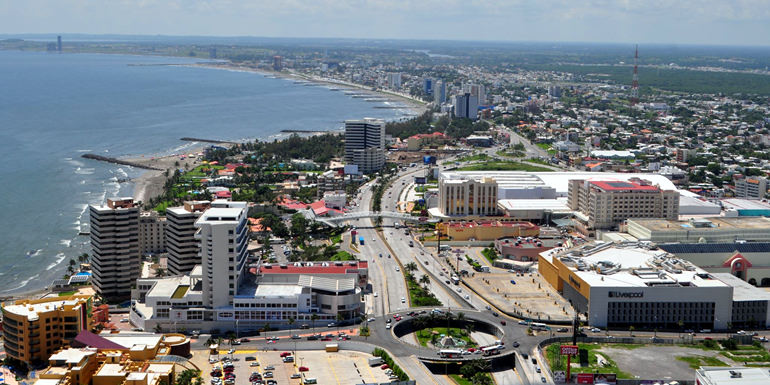 Boca del Río is a city and municipality located in the center of the Mexican state of Veracruz.

It is a port in its own right, as well as the metropolitan area’s center for business travel and upscale hotels and restaurants.

The city contains two museums, one dedicated to Agustín Lara and the other a military ship that has been converted into a museum.

However, the municipality’s main feature is the World Trade Center Veracruz, which hosts business meetings, conferences and conventions.

The municipality Boca del Rio is located on the central zone of the state and part of the plains known as the Llanuras del Sotavento. The main river is the Jamapa, which empties here into the Gulf of Mexico. At the mouth of this river, there are mangroves and boat tours are available to see them and the nearby Moreno Arroyo.

The municipality has a hot, humid climate with most rain falling from June to October.

It is mostly covered in perennially green tropical forest with some pines in the highest elevations. Tree species that can be found here include sapodilla and mahogany with most animal species being small mammals such as armadillos, squirrels, rabbits, opossums and foxes. There are deposits of oil and natural gas within the territory.

The name “Boca del Río” is from Spanish, meaning “mouth of the river” and refers to the mouth of the Jamapa River as it flows into the Gulf of Mexico. The pre-Hispanic name for the area was Tlapaquitan, which means “divided land”.

From 1000 to 1200 BCE, the area was under Olmec domination. The area officially came under Aztec domination in 1474 and is mentioned in the Codex Mendoza as part of the district of Cuetlachtlan. However, the Aztecs had been active here for sometime before that.

In 1518, Juan de Grijalva came to the area with his crew and named the river “Río de las Banderas” because they saw indigenous peoples communicating across the river with flags. In the same year, the first Christian rites were performed at a chapel called Nuestra Señora de Santa Ana.

In 1879, the localities of Hacienda de Santa Maria Punta, Hato and Anton Lizardo were separated from the municipality and joined with neighboring Alvarado municipality. In 1892, the Veracruz- Tierra Blanca rail line was built, passing through Boca del Río. The settlement gained city status in 1988.

The city is part of the metropolitan area of Veracruz and its port works closely with the port of Veracruz. Much of the area’s modern and luxury hotel and restaurant infrastructure is located here, centered around the World Trade Center Veracruz. The main church is called the Parish of Santa Ana, which was constructed in 1776. Nearby is the colonial-style municipal palace. The Plaza Civica is in front of the municipal palace and contains the Nahuatl Fountain. The main dock is called Muella Banderas.

The Agustín Lara House Museum, also called the “La Casita Blanca” (The Little White House) exhibits works, photographs and personal effects of the poet Agustín Lara, who was called “El Flaco de Oro” (The Golden Skinny One). News clips, caricatures and a replica of the radio studio where he hosted ” La Hora Azul” (“The Blue Hour”) are among the items on display. Lara was one of the city’s most famous sons as a popular songwriter and singer in Mexico. Lara began his career playing the piano in brothels and later became a bullfighter. Lara had seven wives, one of whom was Mexican screen diva María “La Doña” Félix, for whom he wrote the song, “María Bonita.” To be a gentleman, when he and Félix were about to break up, he married her to “make an honest woman of her” even though they had lived together for years.

A ship museum called the Buque Cañonero (Cannon Ship) Guanajuato is located here. When the ship was decommissioned, it was decided to restore it as a naval museum rather than to scrap it. It is considered to be one of the most important naval museums in Latin America. The ship contains an arms room, a telecommunications room, infirmary, bunks, dining room and library. The themes covered include the history of the ship itself as well as naval warfare simulation room, based on the technology of the Xbox 360.

It has its own art gallery, the Galería Veracruzana de Arte (Veracruz Gallery of Art), which is a joint Project between the World Trade Center Veracruz and the Coordinación de Difusión Cultural y Artística del Sistema DIF Estatal (Coordination of Cultural and Artistic Diffusion of the State DIF System). The art center holds temporary exhibits from a variety of artist and with different themes. Some of the shows in 2009 included a collection of portraits done by Mexican artist Enrique Estrada, landscapes of Veracruz state by Armando Zesatti and a photo exhibit named “Lenguajes fotograficas.” The World Trade Center Veracruz also contains an ice-skating rink, something that has become popular in Mexico.

Boca del Río’s two major festivals occur in the summer and are collectively known as the Fiestas del Boca del Río (Festivals of Boca del Rio) or simply Fiestas de Boca. Events take place at various locations such as the Plaza Civica, the Plaza Dorada, the Gutierrez Barrios Theatre, the Plaza Banderas, the San Pedro y San Pablo Church and Vicente Fox Boulevard. Bocafest occurs each year in June when a number of musical artists play in the main venues of the city, especially in Plaza Banderas. Musical styles represented range from the very traditional Mexican folk to electronic music. In 2008, featured artists included Natalia Lafourcade and Aleks Syntek. Other events include Mexican and Caribbean folk dance and music and art expositions. The Feast of Saint Ann is the main traditional festival of the city, taking place from 24 to 31 July. The days are filled with cultural as well as religious events.

Veracruz’s annual carnival parade passes along the boardwalk that connects the port of Boca del Rio with the port of Veracruz. It is one of the highlights of the event, which has contained as many as 35 dance groups, 10 bands and over 100 floats. The city is mentioned in the Guinness Book of World Records for preparing the largest seafood-filled fish in the world.

Off the coast of Boca del Río is an island called Isla de Sacrificios (part of Veracruz municipality), which measures 450 meters long and 198 meters wide, the largest of a group of islands that are in front of the Boca del Río and Veracruz ports.

The island is part of a system of twenty three coral reefs called the Veracruz Reef System which is a national park. It is possible to kayak to the Isla de Sacrificios to observe seagulls, pelicans and the fish that inhabit the coral reef.

In 1983, a study and initial cleanup project was undertaken at the island, which collected fifty tons of trash. Shortly thereafter, the island was closed to the public and since then, there has been a struggle between authorities, tour operators and fisherman as to the fate of the island. There are those who would like to build hotels, restaurants and other facilities for ecotourism.

However, access to the island has been restricted to research, teaching and the occasional sporting event. The island contains one of the lighthouses used to guide ships into the ports of Veracruz and Boca del Rio.