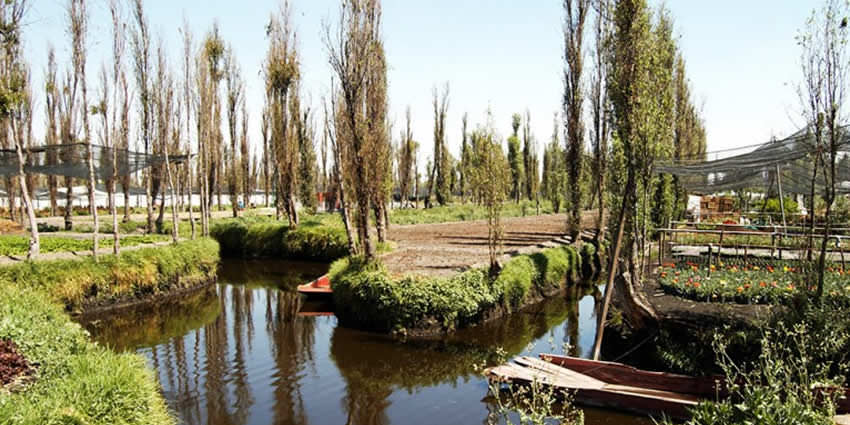 Chinampa (Nahuatl: chināmitl) is a type of Mesoamerican agriculture that used small, rectangular areas of fertile arable land to grow crops on the shallow lake beds in the Valley of Mexico.

Although different technology existed during the Post-classic and Colonial periods in the basin, chinampas have raised many questions about agricultural production and political development.

After the Aztec Triple Alliance was formed, the conquest of southern basin city-states, such as Xochimilco, was one of the first strategies of imperial expansion.

Prior to this time, farmers maintained small-scale chinampas adjacent to their households and communities in the freshwater lakes of Xochimilco and Chalco.

The Aztecs did not invent chinampas but rather were the first to develop them for large-scale cultivation.

Sometimes referred to as “floating gardens,” chinampas are artificial islands that were created by interweaving reeds with stakes beneath the lake’s surface, creating underwater fences.

A buildup of soil and aquatic vegetation would be piled into these “fences” until the top layer of soil was visible on the water’s surface.

These agricultural lands received this nickname due to the illusion they caused. The bodies of land appeared to be “floating” on the water because the canals surrounded the chinampa plots.

Over time, the ditch would slowly culminate in piles of mud. This mud would be then be dug up and placed on top of the chinampas, clearing the blockage.

The soil from the bottom of the lake was also rich in nutrients, thus acting as an efficient and effective way of fertilizing the chinampas. Replenishing the topsoil with lost nutrients provided for bountiful harvests.

Embarcadero-Jiménez and colleagues tested the correlation between environmental parameters and bacterial diversity in the soil. It is speculated that a diverse array of bacteria can affect the nutrients in the soil.

In addition, “the structure of the bacterial communities showed that the chinampas are a transition system between sediment and soil and revealed an interesting association of the S-cycle and iron-oxidizing bacteria with the rhizosphere of plants grown in the chinampa soil”.

One scholar has calculated the size of chinampas using Codex Vergara as a source, finding that they usually measured roughly 30 m × 2.5 m (100ft x 10ft).

In Tenochtitlan, the chinampas ranged from 90 meters x 5 meters to 90 meters x 10 meters. They were created by staking out the shallow lake bed and then fencing in the rectangle with wattle. The fenced-off area was then layered with mud, lake sediment, and decaying vegetation, eventually bringing it above the level of the lake.

Often trees such as āhuexōtl (willow) and āhuēhuētl (cypress) were planted at the corners to secure the chinampa. In some places, the long raised beds had ditches in between them, giving plants continuous access to water and making crops grown there independent of rainfall.

Chinampas were separated by channels wide enough for a canoe to pass. These raised, well-watered beds had very high crop yields with up to 7 harvests a year.

Chinampas were commonly used in pre-colonial Mexico and Central America. There is evidence that the Nahua settlement of Culhuacan, on the south side of the Ixtapalapa peninsula that divided Lake Texcoco from Lake Xochimilco, constructed the first chinampas in C.E. 1100.

The earliest fields that have been securely dated are from the Middle Postclassic period, 1150 – 1350 CE.

Chinampas were used primarily in Lakes Xochimilco and Chalco near the springs that lined the south shore of those lakes.

The Aztecs not only conducted military campaigns to obtain control over these regions but, according to some researchers, undertook significant state-led efforts to increase their extent. There is some strong evidence to suggest state-led operations for the “expansion” of the chinampas.

This is sometimes referred to as the hydraulic hypothesis which is directly related to a hydraulic empire which is an empire that maintains power and control through the regulation and distribution of water. With that said, there is evidence to support the idea of state involvement.

The first is, the amount of manpower and materials it would take to build, turn, and maintain the chinampas. However, arguments about state control of the chinampas rely upon the assumption that dikes were necessary to control the water levels and to keep the saline water of Lake Texcoco away from the freshwater of the chinampa zone.

This would all make sense but there is evidence showing that the chinampas were functional before the construction of a dike that protected them from the saline water.

It is highly suggested that the implication of the dike was meant to drastically improve the size of the chinampa operation.

Smaller-scale farms have also been identified near the island city of Xaltocan and on the east side of Lake Texcoco. With the destruction of the dams and sluice gates during the Spanish conquest of Mexico, many chinampas fields were abandoned.

However, many lakeshore towns retained their chinampas through the end of the colonial era since cultivation was highly labor-intensive and less attractive for Spaniards to acquire.

The Aztecs built Tenochtitlan on an island around 1325. Issues arose when the cities constant expansion eventually caused them to run out of room to build. As the empire grew, more sources of food were required. At times this meant conquering more land, other times it meant expanding the chinampa system.

With this expansion, Chinampa’s consecutive crop output became a huge factor in the production and supply of food. The records that show tribute paid at the empirical level suggest that farmers had a relatively light tribute to pay compared to others.

The vague population figures on record indicate that annual tribute was only a fraction of the amount necessary for local needs.

The extent to which Tenochtitlan depended on chinampas for its fresh food supply has been the topic of a number of scholarly studies.

Among the crops grown on chinampas were maize, beans, squash, amaranth, tomatoes, chili peppers, and flowers. Maize was planted with a digging stick “huictli” with a wooden blade on one end.

The word chinampa comes from the Nahuatl word chināmitl, meaning “square made of canes” and the Nahuatl locative, “pan.” In documentation by Spaniards, they used the word camellones, “ridges between the rows.”

However, Franciscan Fray Juan de Torquemada described them with the Nahua term, chinampa, saying “without much trouble [the Indians] plant and harvest their maize and greens, for all over there are ridges called chinampas; these were strips built above water and surrounded by ditches, which obviates watering”.

Chinampas are depicted in pictorial Aztec codices, including Codex Vergara, Codex Santa María Asunción, the so-called Uppsala Map, the Maguey Plan (from Azcapotzalco). In alphabetic Nahuatl documentation, The Testaments of Culhuacan from the late sixteenth century has numerous references to chinampas as property that individuals bequeathed to their heirs in written wills.

There are still remnants of the chinampa system in Xochimilco, the southern portion of greater Mexico City. Chinampas have been touted as a viable model for modern sustainable agriculture, although one anthropologist discounts that contention.

Based on information from the year 1998, chinampas are still present in San Gregorio, a small town east of Xochimilco, in addition to San Luis, Tlahuac, and Mixquic.

Although many of these floating gardens were constructed and thoroughly tended to during the Postclassic Period through the time of the Spanish conquest, many of these plots of land several still exist and are thriving today.

Many of these chinampas are allowed by present-day farmers to become overgrown. Some choose to use canoes to farm, but many are becoming increasingly dependent on wheelbarrows and bicycles for transportation.

Other fields, such as some located in San Gregorio and San Luis areas, have been deliberately filled up. As the canals dry up, several of the fields are naturally joined together. Although not used for their original purpose, they are commonly utilized for cattle feed.

The young leaves of quelites and quintoniles, which are often mistaken for “weeds,” are grown and harvested to be used in the creation of sauces. Flowers also continue to be grown on these plots. Some chinampa fields are even used as tourist sites. Ricardo Rodriguez’s business, De La Chinampa a Tu Mesa (“From the Floating Island to Your Table”), acts as both.

His company partners with local farmers and helps them in revitalizing traditional agriculture through the use of chinampas, many found on the canals of Xochimilco. In the effort to preserve the historical and successful chinampa farming process, Rodriquez has linked traditional production techniques with new technologies.

Customers can sign up to receive fresh produce, harvested from the chinampas, to be delivered to their homes’ through his online website.

“We (De La Chinampa a Tu Mesa) help generate demand, which motivates them (chinampa farmers) to keep farming. And this helps restore the chinampas. The market is starting to recognize the value of the chinampas”.

Although many locals, tourists, and farmers are happy to be returning to their agricultural roots, they are faced with several challenges.

During the Spanish conquest, many of the lakes were drained. That unfortunately limited the agricultural capacity of the lakes like the one at Xochimilco. In addition, in 1985, an earthquake struck, further damaging several of the canals.

Other challenges include limited water supply, the use of pesticides, climate change, urban sprawl, and water pollution problems related to untreated sewage and toxic wastes.