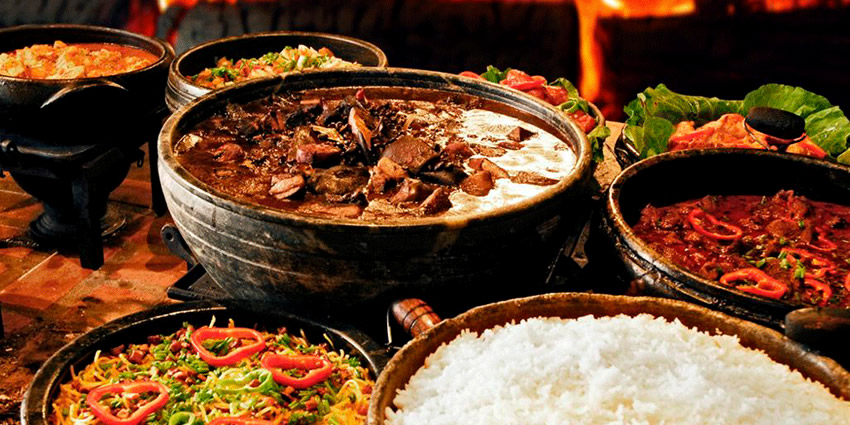 Mexican cuisine is well known worldwide for its diverse tastes and colors, as well as the combination of different spices and unique ingredients, characteristic only for Mexico.

Mexican cuisine is varied and in each Mexican state and region, the national cuisine has its own characteristics and preparations.

In 2010 UNESCO declared Mexican cuisine as an Intangible Cultural Heritage of Humanity.

Rich in contrasts, filled with wonderful flavors and amazing aromas, full of flavor diversity, and unique in its aromas, Mexican cuisine for sure will please everyone, even the most demanding gourmets from all over the world.

Mexican pre-Hispanic cuisine originated much long before this territory became known as Mexico. Here are some of the pre-Hispanic preparations that are still in use in some Mexican regions:

Nixtamalization is the process of removing the cuticle of the corn grains by soaking to facilitate the grinding of the grain and thus finally obtain a paste or dough used in the preparation of countless foods, one of the best known is the corn tortilla, which in ancient times was used as a dish and food at the same time.

Atoles is a substantial drink helping the peasants to carry out intense working hours. This mixture was also can be prepared with nixtamalized corn with water and sweetened with honey or some fruit.

Tamales are prepared by filling the corn with beans, some boiled or roasted sauce. Tamales could be steamed or cooked over a comal (some kind of flat frying pan). To improve the flavor and consistency also can be added a “tequesquite” or tomato sauce, which acted as a kind of chemical yeast.

Quelites are leaves, buds, shoots, petioles, stems, and even flowers of various herbaceous plants that are considered edible in Mexico and were one of the fundamental elements in the diet of pre-Hispanic civilization.

Chiles are a variety of hot pepper, which also were fundamental in the culinary element in Mesoamerica. And nowadays they continue to be seasoned in sauces and dishes of typical Mexican cuisine.

Red and green beans. In pre-Hispanic times, the pods of green beans were consumed along with red bean seeds, which were boiled in water with a natural mineral salt with a purpose to soften and give them flavor and better assimilate their nutrients.

Desert plants and fruits could be obtained from cacti and/or succulents, one of the most famous being the nopales. Succulents used to be used to obtain mead, an ingredient that was left to ferment to prepare one of the sacred drinks – pulque.

Cocoa is another very important product. Cocoa beans were so highly valued that they were even used as a bargaining chip. By means of this grain, a bitter-tasting drink was prepared that was usually flavored with vanilla or chili peppers in some occasions.

The cocoa drink was also sweetened with a little honey or agave, said drink received the name of “xocoatl” and was consumed only by the upper classes, the high priests, and the warriors who were going to fight.

Conquista: a meeting of flavors in traditional Mexican cuisine

The food that the Spanish brought became part of a wide repertoire of dishes that today characterize traditional Mexican cuisine.

Meat products. Certain animals were totally unknown by the inhabitants of the region, even at the beginning they were viewed with fear, but with the passage of time, they became a widely consumed food in the diet of New Spain.

Fruits and vegetables were fundamental ingredients in the Spanish diet thanks to its extensive agricultural tradition. Some of the most important are products brought in Mexico by Spaniards:

The vine, a climbing shrub with a twisted, woody trunk that can be up to 20 m high. Fresh grapes and wine were widely consumed in New Spain. The wine was used as a habitual drink, as well as in religious ceremonies of the Catholic Church, in which bread and wine are consecrated to represent the resurrection of mythological Jesus.

Citrus which in turn came from the marked Arab influence that existed in Spain.

Spices, such as cinnamon, cloves, nutmeg, and saffron began to be used in many dishes.

Cereals such as wheat, rice, oats, and barley.

Other fundamental ingredients for current Mexican cuisine were also brought in, such as garlic, onion, cabbage, peas, pears, apples, peaches, and sugar cane.

Spaniards began to experiment with various dishes and preparations within different areas of culture, one of the most relevant centers would be the convents and churches.

During the first years of the conquest, convents, churches, and monasteries created a series of preparations both complex and simple and always full of flavor. Some of the most common ingredients were the sauces of nuts, sweets, preserves, bread, among other foods that began to be used for the recipes of the conventual cuisine.

In the beginning, the diet of the friars was somewhat precarious; however, over time it was transformed and even led to excesses. For example, at first, were only allowed to drink a certain amount of chocolate per day, later its fascinating flavor began to wreak havoc, generating a small addiction to the cocoa drink.

The women of the convents of New Spain were the ones who gave life to the stoves and transformed the kitchen into a laboratory of creation, which gave rise to the most emblematic dishes such as “mole” or “chiles en nogada”.

Although the nuns were very marked by fasting and abstinence, they used to give themselves small “permits” when the entry of a new novice or the feast of a patron saint was celebrated. So they flaunted their culinary skills, preparing large and delicious banquets.

After the period of the conquest, the territory experienced a time of political and social revolution known as Independence. At this time Mexico was born as the nation we know today. Although the conflict made it difficult to use certain foods, Mexican cuisine continued to explore its flavors.

Independence in Mexico began in 1810 and ended in 1821, this period also represented one of the most emblematic episodes of Mexican cuisine. The armed movement that presented more than 10 years using a food shortage and a brake on culinary creation.

However, in the end, a new boom was achieved thanks to the influence of other countries. Throughout the 19th century, the Mexican territory was filled with settlers of various nationalities, mostly European. So bakeries, confectioneries, chocolate shops, and hotels began to open, making great contributions to free Mexico.

Some of the main dishes of that time were:

Later, in 1910, an armed social movement known as the Mexican Revolution revived. However, this was not the exception of Mexican culinary creation, since, despite the scarcity, ingenuity was not long in coming.

During the revolutionary era there was scarcity in many ways, throughout this movement it also became difficult to get food, so everything that was at hand had to be used.

One of the key figures were women who accompanied the men who were fighting, known as “adelitas”. So the participants of the movement enjoyed simple but very seasoned meals, being a source of creativity for the elaboration of emblematic dishes among which are:

During the revolutionary era, many differences were marked between social classes and the gastronomic aspect was no exception. Each of the following social classes had a very different diet:

The legacy of modern Mexican cuisine

Thanks to the fusion of diverse cultures and historical eras, Mexican cuisine became increasingly stronger, becoming the modern Mexican cuisine that currently lives in every corner of the world.

Within international cuisine, the fusion of cultures began to become popular, a syncretism and appropriation that was experienced thanks to different times and moments. This is how the new classics of international Mexican cuisine were born, among which are the Swiss enchiladas and others.

Another dish that began to be found in the menus of cafes and restaurants around the world is the sandwich club, a preparation that originated with the American influence since there was a competition between the cake and the sandwiches or sandwiches of the United States.

Some of the most popular foods in contemporary Mexican cuisine are:

Corn is a characteristic element since pre-Hispanic times. Corn never disappeared from Mexican culture, so it accompanies various dishes. Currently, in Mexico, there are small stalls that sell boiled corn in the most traditional way.

Coffee is another product that managed to position itself within the general taste of the population. This drink arrived in Mexico thanks to foreign influence. However, little by little it became a perfect complement to Mexican breakfasts and snacks. The traditional way of preparing coffee in this country is known as “café de olla”.

Oil is another ingredient that had a great influence on Mexican cuisine, oil displaced lard that was used in more traditional recipes.

Bread has great importance at breakfast and snacks, it is used to eat fresh and just out of the oven. In ancient times it was reserved for the upper and middle classes.

Aztec cake. This recipe that emerged during modernity, its creation was possible thanks to the invention of ovens that were fired with gas. This food has traces of the culinary fusion that occurred at the end of the century. The Aztec cake is the Mexican version of lasagna, in which the wheat pasta and tomato sauce are substituted for other traditional Mexican ingredients.

Mexican gastronomy has gone through different historical moments that have marked its course, making it one of the most pleasant for the palate. However, it continues in constant transformation, recovering its roots and exploring new flavors.

To prepare this fantastic dish will take a bit of time to chop up all ingredients, but Mexican food and orzo pasta lovers will love it. The salad has the fresh flavor of lime and cilantro!

Pour lightly salted water into a large pot or saucepan and bring to a boil over high heat.

Add the orzo pasta and bring the pot back to a boil. Cook orzo in an uncovered saucepan, stirring occasionally until orzo is cooked through (but still be firm to the bite) for about 10 minutes. Then drain.

Place the drained orzo in a large dish or salad bowl and add chickpeas, beans and black beans, corn, red and yellow bell peppers, chopped red onion and chives, coriander, and salt and pepper to taste.

Pour salad with lemon juice and oil, mix all ingredients together and refrigerate at least 2 hours before serving.