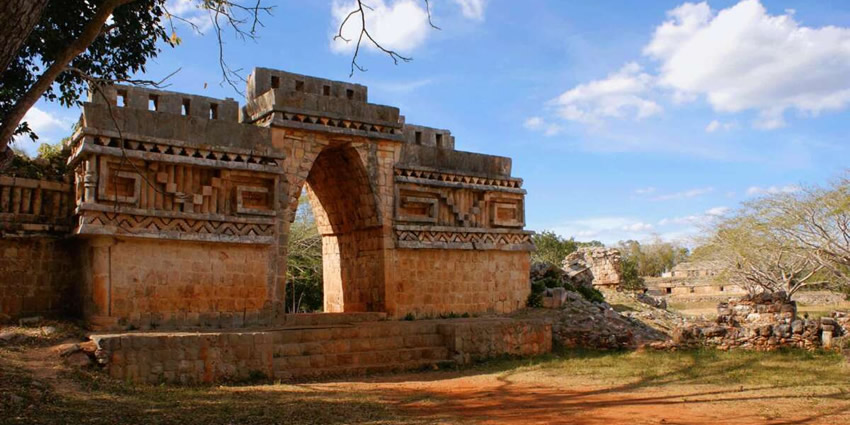 The Puuc Route is a tour of archaeological sites that has undoubtedly become one of the favorite walks for those who come to Yucatan.

When making the journey through this route, you will be able to find places full of history, artisans, and of course, the best of Yucatecan gastronomy.

The Puuc Route is located just 80 km south of Mérida, this route covers the south of the Yucatan and the north of Campeche states.

Puuc is the name of either a region in the Mexican state of Yucatán or a Maya architectural style prevalent in that region. It was named Puuc (“sierra” or “mountain range of low hills”) due to the type of architecture that predominates in this area.

Since the Yucatán is relatively flat, this term was extended to encompass the large karstic range of hills in the southern portion of the state, hence, the terms Puuc region or Puuc hills. The Puuc hills extend into northern Campeche and western Quintana Roo.

The area thus designated extends from Maxcanú to the south of Peto, reaching, towards the southwest, to Campeche. As its name describes well, it is an area of ​​small hills, without rivers and with few cenotes, with a good proportion of fertile land. These limits do not correspond to the limits of the Puuc style, since there are samples of this style in other places in the Yucatan Peninsula.

The most relevant Mayan cities that fall within this region are Uxmal, Kabáh, Nohpat, Sayil, and Labná. Between them, there are roads that connect them, called “sacbe” or “sacbeob” (“white way” or “white ways”).

The Puuc route can be covered in one day or in two parts. Everything will depend on the time you dedicate to each area.

If you do not have a vehicle, you can use the alternative of transportation to take you to the complete tour of the archaeological sites with time allocated to each one. This bus is only available from Merida, on Sundays at the terminal located at Calle 69 by 68 and 70 Centro.

To start the tour, it is advisable to start it in the Loltún caves, an hour and a half from Mérida.

From Mérida, take the road to Campeche and follow the signs to the archaeological zone of Uxmal. In the town of Muna, take the detour that indicates the Loltún caves until you reach this place.

Once you have visited this grotto, we recommend you continue the journey to Labná; Xpalak, and Sayil, then Kaba and finish in the archaeological zone of Uxmal.

In Puuc architecture (such as in Uxmal) buildings were decorated with carefully cut veneer stones set into a concrete core.

The lower portion of the façades are blank with a flat surface of rectangular blocks punctuated by doorways, while the upper façade is richly decorated with intricate stone mosaics, often alternating repeated geometric elements with more elaborate figurative sculpture.

Long-nosed masks (commonly believed to be of the Maya rain god Chaac) are found on many Puuc buildings.

Beyond the impressive decorative elements of Puuc architecture, the use of a concrete core is also considered an architectural advance beyond the earlier Maya technique of using larger stones (set on top of one another in lime and mud mortar) for structural support.

The concrete core-veneer masonry allowed for slightly larger and more stable interior rooms. Many corbelled vaults in the Puuc style remain to stand, even when most of the veneer stones have fallen away.

The most famous of the Maya sites exhibiting the Puuc architectural style is Uxmal, other major Puuc-style sites in the region include Labna, Kabah, Sayil, and Xlapak.

This architectural style is also seen at Kiuic, Bolonchen, Chunhuhub, Xculoc, and many smaller ruins.

The transition from earlier Classic Period architecture to Puuc style core-veneer masonry is well documented at the site of Oxkintok. To the south, the style can be found in Edzná; and to the east at Chichen Itza (outside of the Puuc Hills region).

Puuc Biocultural State Reserve, also known as Kaxil Kiuic reserve was designated in 2011. It covers an area of 1358.93 km².

The reserve was created to protect the region’s archeological sites as well as its biodiverse flora and fauna. The reserve is home to 247 birds, 63 mammals, 52 reptiles, and 14 amphibian species. Five species of large felines, including jaguars, live in the reserve.