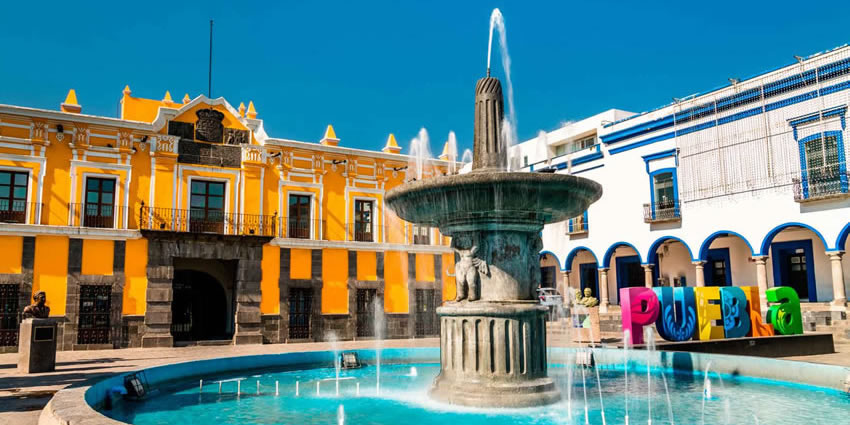 Get a small but great taste of colonial Mexico!

When, in 1521, the conquistadors of Cortez destroyed the Aztec empire of Montezuma, they founded the colony kingdom of New Spain, destined to last for three centuries, ranging from the current states of the Southwestern United States to the Panama Canal.

The introduction of pack animals, from work and farm animals, of elementary metal technical tools such as hoes, plows, and wheels, new crops such as wheat, flax, hemp, coffee, and sugar cane, and the use of fertilizers – all things previously unknown in the New World – gave newcomers unimaginable wealth.

However, these wealthy immigrants left with nostalgia for the motherland and their lifestyles. They tried to fill the new colony by building cities in the image and likeness of those left in the homeland.

All over the country, often above the remains of the previous ancient civilizations and most of the time using the same stones, they began to have graceful urban agglomerations with the typical Iberian structure with a square plan, gravitating on an enormous central square – the Zocalo – where the public and religious buildings found space, the sumptuous residences of the nobility and, slowly, also of the nascent middle class of the enriched mestizos.

A comprehensive tour of Colonial Mexico will give you the chance to catch glimpses from the past and see how this fantastic land learned how to create and keep the perfect combination between the old and the new.

Between 1510-1810, the Spaniards did more than ransacking the country’s natural resources, enslaving the locals, and destroying sacred temples and religious sites.

No, they also used the leftovers from the destruction of these ‘heathen’ buildings, combined them with some colonialist architectural styles and sensibilities, and developed a wealth of colonial cities for which Mexico remains well-known to this day.

Here are ten of the most beautiful colonial cities of Mexico you should visit at least once.

Most beautiful colonial cities in Mexico

Guanajuato is up there as one of Mexico’s most popular colonial cities, thanks to its relative proximity to the capital, Mexico City, as well as the expat haven of San Miguel de Allende.

Known for winding streets (“callejones”) and colorful facades which give Guanajuato its unique charm and character.

You can also find many reminders of the city’s colonial past in the Teatro Juárez, the Alhóndiga de Granaditas, and the plentiful baroque churches.

Speaking of San Miguel de Allende, this favorite with out-of-towners and retirees is another classic example of a Mexican colonial city and one which you should definitely add to your Mexico bucket list.

After all, we’ve all seen the photos of San Miguel’s breathtaking pink-hued church, so why not go and see it for yourself? Even if the church doesn’t take your fancy though, San Miguel is also known for tin handicrafts and an artsy vibe.

The entire state of Oaxaca is littered with architectural remnants of Mexico’s colonial past, but the capital, Oaxaca City, is perhaps where you’re likely to find some of the most impressive examples, such as the Templo de Santo Domingo, the Basílica de la Soledad, and the cathedral.

Aside from exploring the colonial baroque buildings that dot the capital city though, you should also indulge in sampling Oaxaca’s renowned food scene.

If you’d rather head slightly north for your colonial Mexico fix, consider a stop in Baroque-happy Puebla City, which was founded in 1531 by Spaniards in the Valley of Puebla.

While Puebla sustained some damage in the recent earthquakes, everything is more or less back to normal in and around the Historic Center, and you should definitely check out the striking central Cathedral (complete with ornate, tiled cupulas) and deep purple paint job.

San Cristóbal de las Casas, in the state of Chiapas, is a backpacker favorite, and with good reason.

However, this colonial city is also a worthy destination in and of itself that you should consider visiting if you like affordable and abundant artesanías and rich cultural history.

Aside from that, San Cris is also home to some magnificent buildings, such as the famous mustard-colored cathedral.

Tlaquepaque is a municipality that extends much further than its petite and well-trodden historic center.

However, many people write it off as just a day trip from Guadalajara, when it really deserves a couple of days’ exploration at least.

Relaxed, picturesque, and full of artsy surprises at every turn (like tile shops, galleries, and museums), Tlaquepaque is unbearably pretty. And the colonial architecture? Look no further than the Santuario de Nuestra Señora de la Soledad.

Zacatecas rarely factors on most Mexico itineraries, given that it’s a bit further north than most of the main sights and doesn’t have the same reputation as, say, Guanajuato.

However, if you’re truly determined to visit some of Mexico’s best colonial cities, you have to stick Zacatecas on your bucket list for the ornate basilica alone.

Taxco makes for an easy day trip from Mexico City and was once known for having some of the country’s most profitable silver mines.

Nowadays though, Taxco is less about the mines and more about the shops (where you can buy some sterling silver bargains), as well as the winding cobbled streets that seem to spiral on for miles, the pretty whitewashed buildings.

And, of course, don’t forget to visit the show-stopping Templo de Santa Prisca.

Humid Mérida is not for the faint-hearted in the height of summer, but it is growing in popularity amongst expats and visitors alike, who have started to recognize the casual Caribbean charm and beauty of the place… excessive sweating aside.

With a burgeoning art scene, some great food, and a wealth of well-preserved colonial buildings, including numerous chapels, theatres, and cultural centers, now is really the time to visit.

Finally, we’ll wrap up this guide to Mexico’s top colonial cities with Cholula, which is just twenty minutes away from Puebla.

It may be more of a town than a city, but don’t underestimate compact Cholula.

After all, it was one of the most historically important colonial sites in Mexico and remains a must-visit for those of you who are into cute centers, good nightlife, and interesting museums.

Oh, and it’s home to the world’s largest (by volume) pyramid of Cholula.