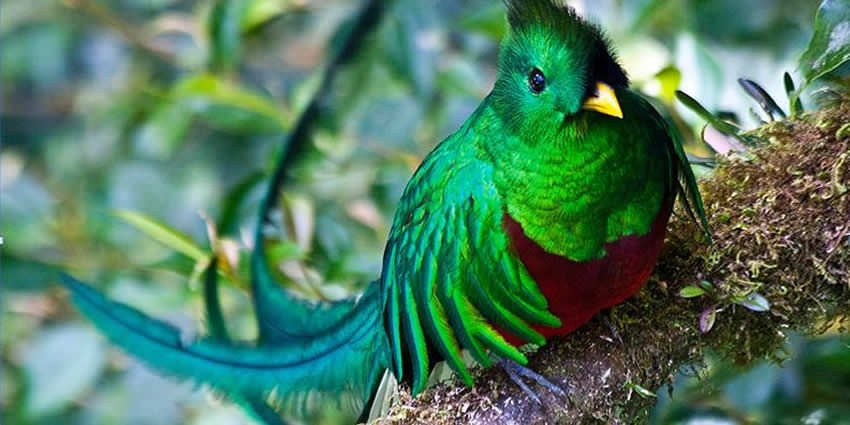 Quetzals are strikingly colored birds in the trogon family.

They are found in forests, especially in humid highlands, with the five species from the genus Pharomachrus being exclusively Neotropical, while a single species, Euptilotis Neoxenus, is found in Mexico and very locally in the southern United States.

They are fairly large (all over 32 cm long), and slightly bigger than other trogon species.

Quetzals have iridescent green or golden-green wing coverts, back, chest and head, with a red belly. They are strongly sexually dimorphic, and parts of the females’ plumage are brown or grey.

Even with their famous bright plumage, they can be hard to see in their natural wooded habitats.

These largely solitary birds feed on fruits, berries, insects, and small vertebrates (such as frogs).

None of the many quetzal species are under immediate threat in the wild, although the eared and resplendent quetzal are at the Near Threatened status. The remaining are not considered threatened by the IUCN and all are locally common.

The name quetzal is from Nahuatl quetzalli (“large brilliant tail feather” or “tail-coverts of the quetzal”), from the Nahuatl root “quetz” = “stand up” used to refer to an upstanding plume of feathers.

The word entered English through Spanish.

The word quetzal was originally used for just the resplendent quetzal, the long-tailed quetzal of southern Mexico and Central America, which is the national bird and the name of the currency of Guatemala.

It still often refers to that bird specifically but now also names all the species of the genera Pharomachrus and Euptilotis.

Pharomachrus is from Ancient Greek φάρος pharos, “mantle”, and μακρός makros, “long”, referring to the wing and tail coverts of the resplendent quetzal (the second h is unexplained).

The quetzal is also known in Spanish as the pilco.