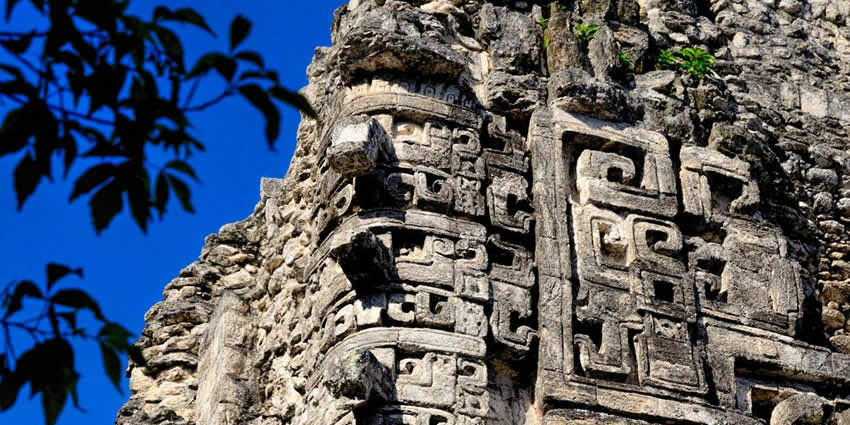 During the first years of the 20th century, French explorer, Count Maurice de Perigny, ventured into the dense forest of Campeche and discovered several new and enigmatic Maya sites, which had gone completely unnoticed until then.

Although the region had already been visited years before by the Austrian Teobert Maler, it was Perigny who realized that the ancient architecture of southeastern Campeche was different from that which existed in the Petén region in Guatemala and to the north on the limestone plain of the Yucatán.

The ruins were discovered near a seasonal river, the banks of which were covered with a type of tree known as bec in Yucatecan Maya (Ehretia Tinifolia). From the on, the area lying between the Mexican states of Campeche and Quintana Roo was known as Río Boque, Río Bec or Río del Roble.

The region is characterized by unusual architecture, which has certain characteristics of its own.

The most representative elements are the buildings with twin towers and elaborately carved facades depicting the “Earth Monster”, sometimes identified as Itzamná, Chaac the rain deity, or even as the monster Cauac.

The twin-towered structures generally consist of only one floor of rooms, framed at each end by two towers that have the appearance of slender temple pyramids.

The stairs to the upper temples are of no practical use.

Although the riser is of normal height, the stair tread is so narrow that only the gods could have possibly stepped there. The upper temple is purely symbolic, consisting of only one wall with an indentation representing corners.

The Earth Monster appears on facades throughout the area.

Becan was, undoubtedly, the political and economic center of this region.

The fact that the region is called Río Bec has led to considerable confusion since it suggests that Río Bec was the largest settlement.

Human occupation of the region can be traced to the beginning of the first millennium before Christ. As far back as 600 B.C., the area surrounding Becan was inhabited by groups of seminomadic farmers.

In the year 200 or 250 A.D., a true city was founded at Becan, complete with pyramids, paved squares, and, undoubtedly, a complex bureaucracy for administering its resources.

The rest of the sites we know of in the region remained small agricultural settlements and had only a few masonry buildings.

Until 550-600 A.D. the architecture reflected that of the rest of the Maya World.

In 600 A.D., however, the Río Bec architectural style first appeared. This flowering, possibly encouraged by the use of more efficient agricultural techniques, would last till the beginning of the 9th century.

It seems the cities of the Río Bec region were abandoned around the middle of the 14th century, although some peasants continued to leave offerings at the structures which were gradually engulfed by the forest.