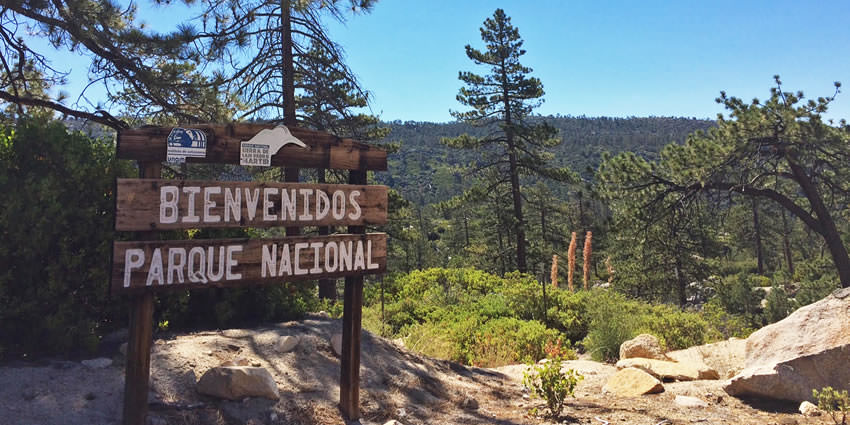 The area was first explored by Europeans in 1701 by Eusebio Francisco Kino by Dominican orders.

The park is known for its pine trees and granite rock formations. Sierra de San Pedro Mártir is a mountain range that runs north-south along the middle part of northwestern Baja California, Mexico. with its name Spanish for “mountains of Saint Peter the Martyr.

Picacho del Diablo (Devil’s Peak) is the highest peak in the park and in Baja California with its summit reaching 3,096 meters.

Sierra de San Pedro Mártir National Park is one of the few pine forests that exists on the Baja California peninsula that is an important habitat for native Bighorn Sheep. In addition, the park is home to the California condor through a re-introduction program by several international agencies.

The National Astronomical Observatory, built in 1971 on a neighboring peak, Cerro del la Cúpula, is home to Mexico’s largest optical telescope, with a diameter of 2.12 meters, and a weight of 40 tons in total. The observatory is the second most important in Latin America.

The first explorations of the region were realized by the Jesuit order during the evangelization era of the neo-Hispanic territories of California. The regions of the Sierra de San Pedro Mártir are thought to have been explored by father Eusebio Francisco Kino and father Wenceslao Link in 1701. Later the Dominicans continuing the evangelization movement built the Misión de San Pedro Mártir de Verona in the southern part of the park, but only ruins are left of the site.

Sierra de San Pedro Mártir National Park was officially created by decree on April 26, 1947, in which 72,909 hectares were set aside and declared protected by the Mexican Federal government.

The National Astronomical Observatory is located at an elevation of 2,830 m. The observatory was built in 1975 and has several large telescopes, the largest of which is 2.1 m. The observatory takes advantage of the high elevation, along with typically clear skies, low relative humidity, low atmospheric pollution, low light pollution, and low levels of radio interference.

The elevated peak is thought to have begun to rise in the Paleozoic era through tectonic rifts. Sierra de San Pedro Mártir a rugged mountain range with drastic topological changes covered with pine forest and surrounded by large deserts. Because it is surrounded by deserts, the park is often described as an oasis.

During the winter in the extremely high elevations, a large amount of snow accumulates while in the summer the lower elevations exceed 38 °C.

The flora is distinct from the flora of the rest of Mexico and shares many species with the Laguna Mountains and the San Jacinto Mountains in southwest California. The lower elevations of the Sierra de San Pedro Mártir are defined by chaparral and desert shrub. Sierra de San Pedro Mártir is a southern demarcation of the distribution of the California fan palm, Washingtonia filifera.

Throughout the park, there are a great variety of mammals: mule deer, bighorn sheep, cougar, bobcat, ringtail cat, coyote, rabbit, squirrel and more than 30 species of bats. The park is also home to many avian species like the bald eagle, golden eagle, falcon, woodpecker, black vulture, crow, several species of Sittidae. Captive-born California condor has been re-introduced to the wild in the Sierra San Pedro Martir, the first time they have been seen in the range since 1937. The condor was introduced into the park with international cooperation between the United States and Mexico. Local ecologists named the second generation of Californian condors “inyaa” (sun in the Kiliwa).