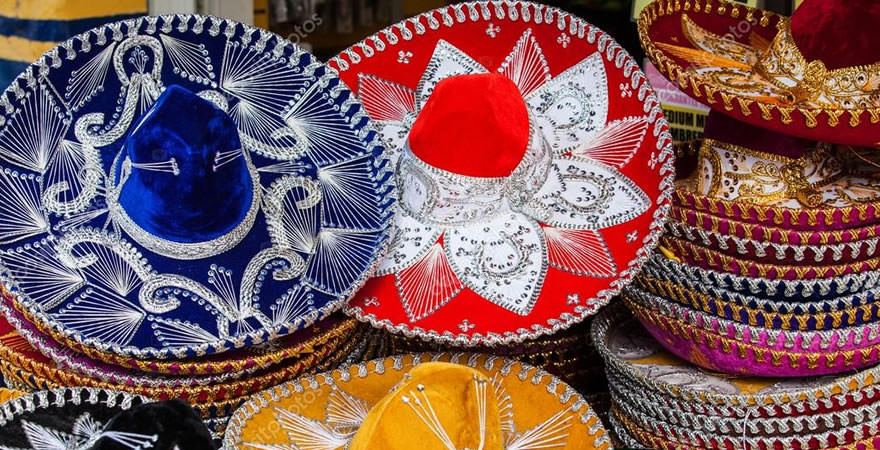 The word “sombrero” means “hat” (“shadower”) and refers to a type of wide-brimmed hat from Mexico, used to shield from the sun. It usually has a high pointed crown, an extra-wide brim (broad enough to cast a shadow over the head, neck, and shoulders of the wearer, and slightly upturned at the edge), and a chin string to hold it in place.

In Spanish, sombrero refers to any wide-brimmed hat.

Sombreros, like the cowboy hats invented later, were designed in response to the demands of the physical environment. The concept of a broad-brimmed hat worn by a rider on horseback can be seen as far back as the Mongolian horsemen of the 13th century.

In hot, sunny climates hats evolved to have wide brims, which provided shade. The exact origin of the Mexican sombrero is unknown, but it is usually accepted that the hat originated with Mestizo cowboys in Central Mexico.

Although sombrero is usually taken to refer to the traditional Mexican headwear, the term sombrero predates this item of clothing, and is and has been applied to several different styles of hat, since it is the actual word for a hat in Spanish.

Other types of hats known as sombrero can be found in South America and Spain, including the sombrero calañés, sombrero cordobés and sombrero de catite (Spain), sombrero vueltiao (Colombia).

Many early Texan cowboys adopted the Spanish and Mexican sombrero with its flat crown and wide, flat brim. Also called the poblano, these hats came from Spain.

The Mexican variation of the sombrero added an even wider brim and a high, conical crown. These are the hats worn by mariachi musicians and charros. Both types of sombreros usually include a “barboquejo” or chin strap.

In the Western United States, the sombrero had a high conical or cylindrical crown with a saucer-shaped brim, highly embroidered and made of plush felt.

In the Philippines, due to the influence from Spain brought about by the Manila galleon trade. The term has been assimilated into the Tagalog language in the form of sumbrero and now refers to any hat – from actual sombreros to baseball caps.

The galaxy Messier 104 is known as the Sombrero Galaxy due to its appearance. Similarly, Tampa Stadium was also known as “The Big Sombrero.”

The Sombrero Festival was founded in Brownsville, TX, in 1986 by Danny Loff in order to enhance the spirit of Charro Days and to expand the activities available to the general public.

During his campaign for President, Barack Obama made an unexpected visit to the Sombrero Festival in Brownsville, Texas, where he ate a Mexican torta, played games, and greeted voters. The event not only provides families with entertainment but also gives away money to charitable organizations and to fund public facilities in Brownsville, Texas.

Mr. Amigo Association, an organization that works for a friendly relationship with Matamoros, Tamaulipas, Mexico, and Brownsville, Texas, United States and to preserve the Charro Days and Sombrero Festival celebrations, became a part of Charro Days in 1967.

Sombrero Fest, a three-day Washington Park street party with popular rock, country, and Tejano performers was added in 1986. Moreover, it is worth mentioning that the first president of the Mr. Amigo Association was the former president of Mexico, Miguel Alemán Valdés.

During the creation of the NAFTA agreement in 1988-1989, Congressman Solomon Ortiz presented the Mr. Amigo Association with the Mr. Amigo Review Award for the distinction of being one of the first organizations to extend friendship and mutual understanding between the United States and Mexico.

The Mr. Amigo Review Award remains on exhibit at the Library of Congress in Washington, D.C. as a model of bi-national friendliness between these two countries.