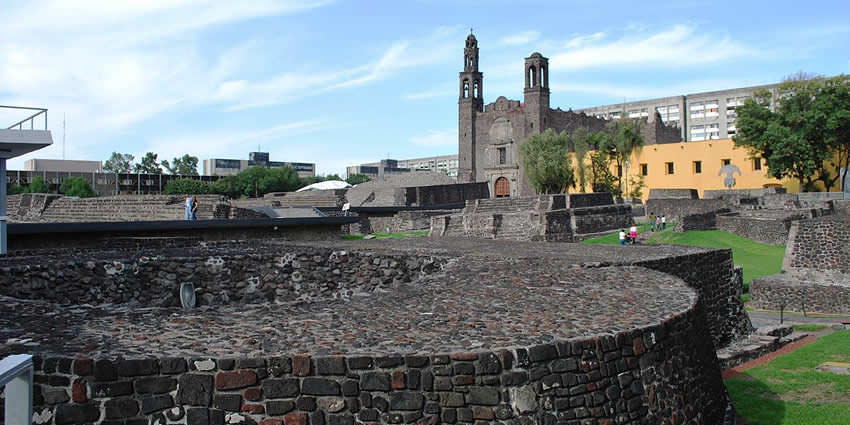 Tlatelolco is an archaeological excavation site in Mexico City, Mexico where remains of the pre-Columbian city-state of the same name have been found. It is centered on the Plaza de las Tres Culturas. On one side of the square is an excavated Aztec site, on a second is a seventeenth-century church called the Templo de Santiago, and on the third stands a mid-20th-century modern office complex, formerly housing the Mexican Foreign Ministry, and since 2005 used as the Centro Cultural Universitario of UNAM (National University of Mexico).

At the main temple of Tlatelolco, archeologists recently discovered a pyramid within the visible temple; the pyramid is more than 700 years old. This indicates that the site is older than previously thought, according to the Instituto Nacional de Antropología e Historia (National Institute of Anthropology and History; INAH). Because this pyramid has design features similar to pyramids found in Tenayuca and Tenochtitlan, this site may prove to be the first mixed Aztec and Tlatelolca construction found in Mexico.

On 10 February 2009, INAH archaeologists announced the discovery of a mass grave containing forty-nine human skeletons, laid out in neat lines on their backs, with their arms crossed and wrapped in maguey leaves. The archaeologists located the skeletons in a 13-by-32-foot (four-by-10-meter) burial site as they took part in a search for a palace complex at the Tlatelolco site. The grave was determined to be from the period of the Spanish conquest.

The remains found include those of forty-five young adults, two children, a teenager, and an elderly person wearing a ring that potentially signifies a higher status. Most of the young men were tall, and several had broken bones that had healed, characteristics of warriors.

The team expects to locate at least 50 additional bodies. The grave contained evidence both of Aztec rituals, such as offerings of incense and animal sacrifice, and Spanish elements, such as buttons and a bit of glass.

Salvador Guilliem, head of the site for the governmental archaeology institute, expressed his astonishment at the find – “We were completely taken by surprise. We didn’t expect to find this massive funeral complex.”

He said that it was likely that the indigenous people buried in this grave died while fighting the invading Spanish. They may also have died due to infectious diseases, such as the hemorrhagic fever epidemics in 1545 and 1576, which caused the deaths of a large proportion of the native population. Susan Gillespie of the University of Florida suggested an alternative theory: that the men may have been held as prisoners by the Spanish for some time and executed later.

The site differs from most other Spanish conquest-era graves in the area, because of the manner in which the bodies were buried. The burial was similar to those according to Christian customs of the time. This is in contrast to the thousands of graves found in other Aztec cities, where bodies were found en masse without ritual arrangement. Guilliem added: “It is a mass grave, but they were very carefully buried.”