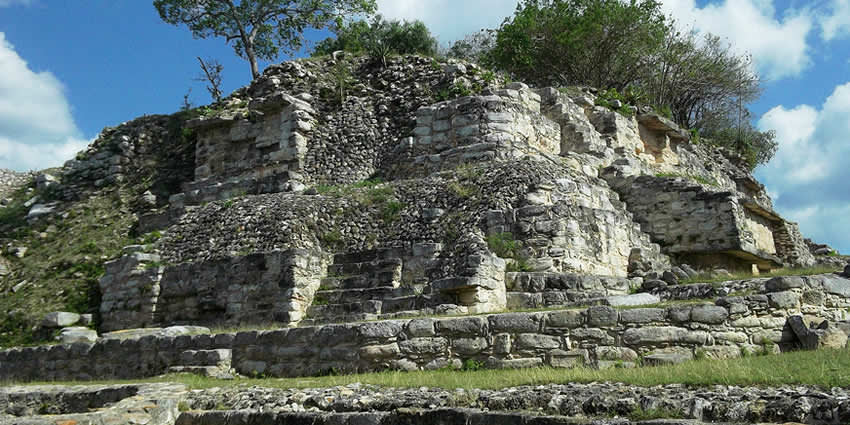 Aké is an archaeological site of the pre-Columbian Maya civilization, located in the Mexican state of Yucatán, 40 km east of Mérida.

The name Ake is a toponym that means “place of reeds” in Yucatec Maya.

One notable feature of the site is its system of pre-Columbian roads (sacbeo’ob) that facilitate access to other settlements in the region.
The remains of an ancient Maya-raised pedestrian causeway (sacbe) run to Aké from Izamal.

The ruins are all within a 19th-century Hacienda henequenera San Lorenzo de Aké, that cultivates henequen (kind of agave).

Surrounded by fruit trees is the main house of San Lorenzo de Ake, that inside you can see three construction periods; beams in the ceilings of wood, iron, and masonry.

The architecture dates from the Early Classic era (CE 250-550). They were first described in print by John Lloyd Stephens and Frederick Catherwood in the early 1840s.

Aké is bounded by two concentric walls, one defines the core of the settlement with an area of 4 square km, while the other protects the core housing. The core is large and square in shape surrounded by tall buildings measuring about 25 square m.

A great sacbé (white road) of 32 km in length connects the central group of buildings of this site to the archaeological site of Izamal.

Part of this sacbé was covered later by the wall that surrounds this Mayan city and its residential area, in order to protect it from invasions. As you walk within the area you will see a large esplanade called the Great Plaza, where the most important buildings are.

The Pilastras Structure is located in the North, and you will see a stele in the south-center of the Great Plaza.

Structure One, also called the Palace, with rows of stone columns atop a step-pyramid platform, is the site’s most impressive feature. While most Maya pyramids are built steep with many narrow steps, Structure One is a gradual climb of huge, flat stone slabs.

This megalithic architectural style is an Early Classic diagnostic, and may also be seen at the sites of Izamal and Ek Balam.

The Aké chapel stands on a Mayan pyramid and two more hills are also located on the land.

In this chapel, the tradition of the Black Christ is celebrated every Holy Saturday, which is more than 137 years old.

Every Glory Saturday of Holy Week, Catholics visit the Aké chapel to take the Holy Christ to Cacalchén on a pilgrimage.

This is how this tradition was born.

The easiest and most cheap way to get there is by bus or by un “colectivo” from Mérida.

Ruins of Aké on Google Maps