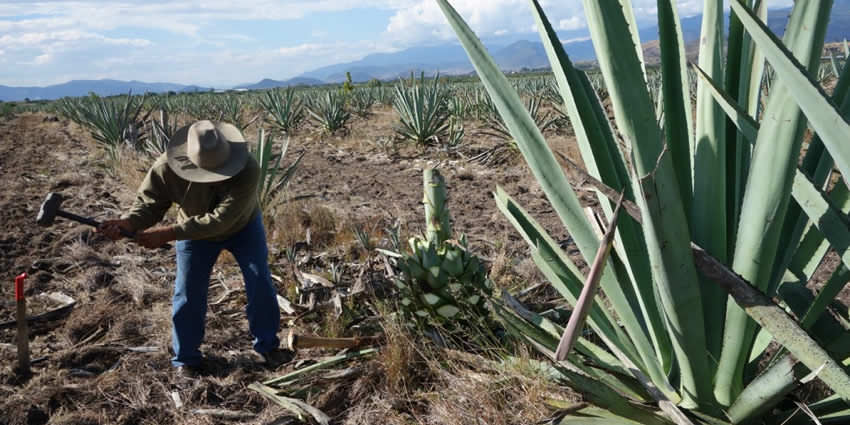 This article was kindly contributed by Mezcal Educational Excursions of Oaxaca.

Artisanal Mezcal in Oaxaca: No Two Batches Are Alike

No, not all mezcal distilled in Oaxaca is smoky, and no, the difference between tequila and its misunderstood cousin is not that the former is commercial or industrial and the latter is handcrafted.

But the truth is that the lesser-known Mexican agave-based spirit is catching on globally. One reason is that no two batches of an artisanal mezcal are the same. Why? This article explains some of the reasons.

Let’s start with a brief primer on traditional mezcal production.

After growing for typically about eight years and sometimes much longer, the agave is harvested; then its hearts (known as piñas) are slow-roasted in a rudimentary airtight chamber over firewood and rocks at the family distillery (palenque) so as to convert carbohydrates to sugars.

This is followed by crushing them either by hand or using a beast of burden pulling a heavy circular stone compound or pure limestone (tahona) around a shallow brick and concrete pit.

It is then fermented with the addition of water in a large vat (tina) and subsequently distilled in a 300 liter or so copper alembic or in a much smaller clay pot, generally twice.

Finally, the alcohol content (ABV, alcohol by volume) is adjusted to the preference of the distiller (palenquero) or his market. Typically he and his family have been making mezcal all their lives based on recipes passed down through generations.

While production is of course based on scientific principles, for them it’s a learned skill and an art, as opposed to reliance upon sophisticated instruments and equipment. 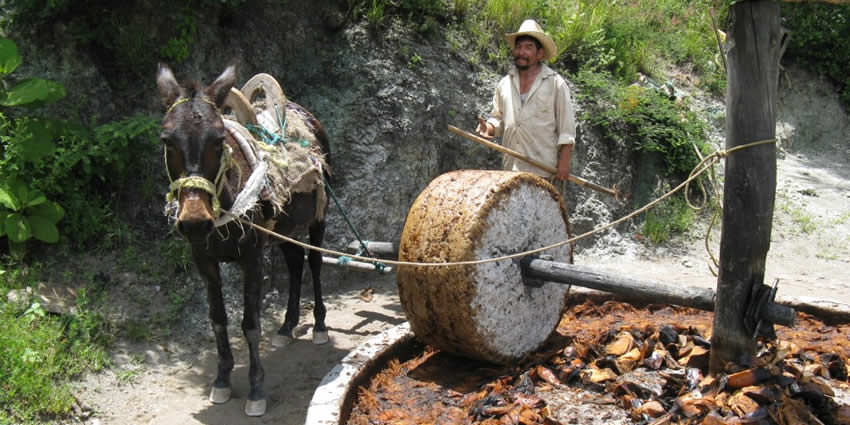 Often subsistence farmers sell their agave to palenqueros. They can’t wait a decade to turn their land into money, so frequently plant other crops such as corn, beans, squash, garbanzo, and/or alfalfa in between the rows of the succulent.

So if the producer makes mezcal from agave grown by one farmer one month, and from another the next month, the two batches will be different, even if the same specie; and generally the palenquero doesn’t know what crop has been impacting the agave over what period of time.

If he harvests from one side of a mountain one time, and from the other the next, even assuming there are been no crops impacting growth, the end result will vary; sunshine, temperature, and precipitation are different on each side of the slope and affect growth in fluctuating ways. 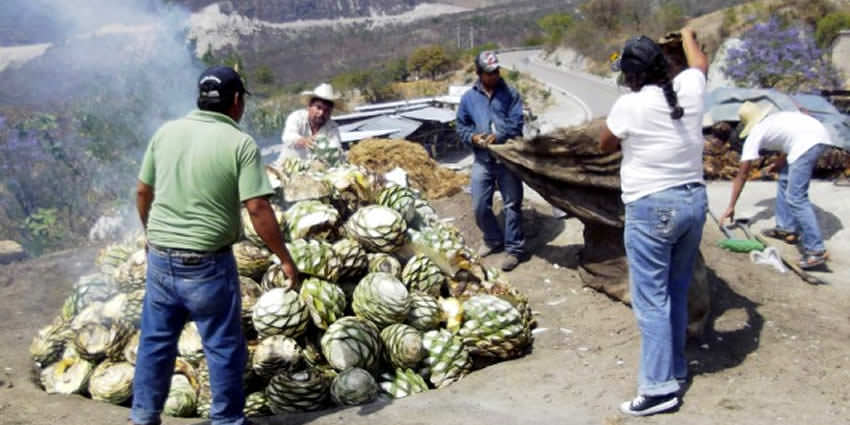 If you bake anything in a sealed chamber over firewood for several days, the type of log employed will impact the quality of what you’re cooking, as will temperature.

Palenqueros may prefer hardwood over pine, but even assuming the former, not all the logs are always from the same type of tree; oak, mesquite, eucalyptus, and others, are all used. It often varies from batch to batch.

And although even baking of all piñas is the preference, it rarely if ever happens. Some are baked less, and others more and in fact almost charred to the point where they are unusable. The extent of baking impacts the flavor of the sugary-rich agave hearts. 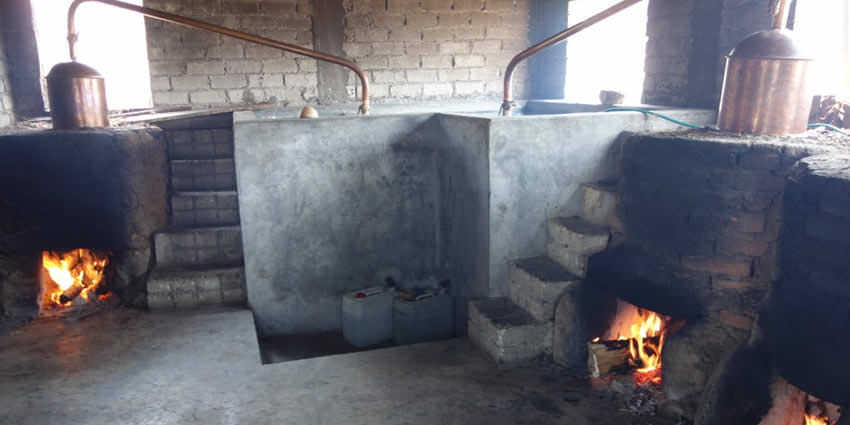 Not all fermentation vessels are created equally. Type of vat impacts mezcal flavor. While most in Oaxaca use wooden vats which last several years, palenqueros are continually buying new ones and discarding the old, often made of varying types of wood.

Artisanal mezcal production typically relies on well or mountain spring water added to the tinas filled with the sweet baked crushed agave. Both sources of water have varying compounds depending on the time of year, which ultimately alters each batch of mezcal based on water quality.

Similarly, true open-air fermentation relies on invisible yeasts which float around the environment. They change from season to season (and in theory day to day).

Thus, if all else remains the same in terms of the piñas, means of production, and tools of the trade, a batch of mezcal distilled today must inevitably be different from the batch to be made in six months because the yeasts causing fermentation are different. 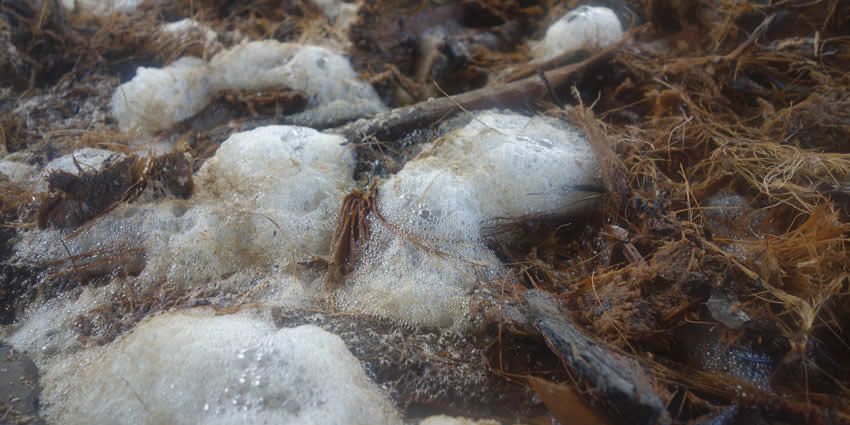 Industrial production aims to achieve consistency of flavor and ABV in part by controlling the temperature and speed at which distillation occurs, through the use of finely calibrated scientific equipment. Artisanal production relies on the skill of the palenquero.

He watches the flame and the flow of liquid coming out of the spigot and makes adjustments by adding more firewood or dousing the flame a bit.

If producing “certified” mezcal he uses a hydrometer to determine ABV, whereas if distilling for local consumption he relies on taste and determining strength by looking at the quality of the bubbles or pearls (perlas).

He does this by employing a venencia of sorts, a length of river reed (carrizo). But in both cases, the mezcal varies depending on the “cuts” he uses to produce mezcal for his particular market.

That is, how he mixes the liquid that falls out of the still at the beginning (punta or cabeza), in the middle (cuerpo), and at the end (cola) is never the same. And, the character of each part has a slightly different nuance to its flavor.

His skill virtually always produces a spirit to his liking, though different from one batch to the next. 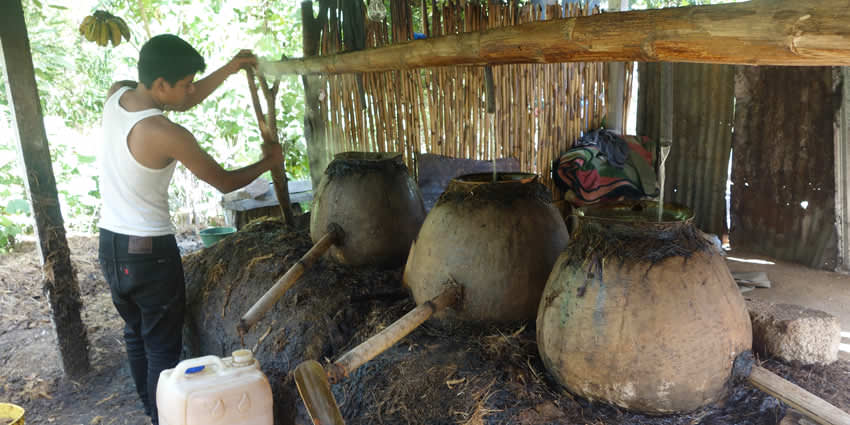 Your master palenqero aims to make every batch of mezcal as best he can, not the same as the last, recognizing that such a task is near impossible. For those of us who imbibe, it’s part of the fun of drinking and collecting handcrafted mezcal.

So cheers, l’chaim, salud, or down the hatch; drink up, but slowly, and most of all savor, because your next shot of this fascinating agave-based spirit will likely taste just a little different from the last.