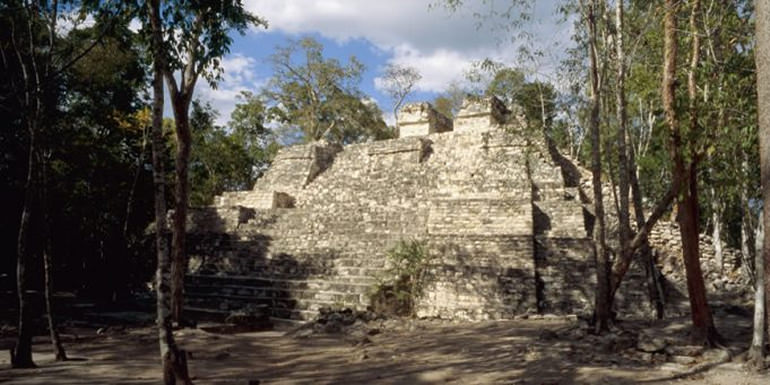 Balamku is a small Mayan archaeological site located in the Mexican state of Campeche. Balamku has located 50 km north of the ruins of the great Maya city of Calakmul, approximately the same distance west of Becan and 60 km west of Xpujil.

The ruins lie within an area referred to by archaeologists as the Campeche Petén, upon a poorly drained karstic plateau. The ruins are bordered on the east and west sides by seasonal swampland, known as “bajos”.

The ruins are 3 km north of the highway running from Chetumal to Escárcega.

The ruins fall within a zone that is poorly understood by archaeology, to the west of the Río Bec stylistic region; the architectural style of Balamku has more in common with the Petén tradition to the south, although Río Bec influences are also evident.

It features elaborate plaster facades dating to the Early Classic period. It has one of the largest surviving stucco friezes in the Maya world. Its most important buildings date from CE 300–600.

The most outstanding discovery so far at Balamku is an almost intact 16.8-meter-long painted stucco frieze dating from CE 550–650.

Balamku was occupied from about 300 BCE, in the Late Preclassic, through to the Terminal Classic period, between 800 and 1000 CE. The earliest architecture in the site is found in the Central and South Groups, dating to the Late Preclassic to Early Classic transition.

The ruins were discovered in 1990 by Mexican archaeologist Florentino García Cruz in the company of INAH custodians when they investigated a report of archaeological looting.

They found a looters’ trench that had partly uncovered a painted stucco frieze that had originally formed part of the upper facade of an Early Classic building.

After initial rescue work, the site was formally excavated from 1994 to 1995 by a team headed by Mexican archaeologist Ramón Carrasco and including two French archaeologists, Claude Baudez and Jean Pierre Courau.

Carrasco and his Mexican team concentrated on the Central Group while the French archaeologists investigated the South Group.

The ruins of Balamku cover an area of approximately 25 hectares. The site features a very low density of peripheral architecture around the principal groups; by 100 meters away there are practically no further buildings.

The ruins are distributed in four major architectural groups. The Central and North Groups are situated close to water sources.

The Central Group comprises three plazas, labeled Plaza A, B, and C.

Plaza A is situated at the southern extreme of the Central Group. It supports a Mesoamerican ballcourt and a number of mounds that have not yet been investigated archaeologically.

Plaza B is located in the northwestern sector of the Central Group. It is enclosed by Structure I on the north side, Structure IV on the south side, and structures V and VI on the east and west sides respectively.

Test pits have uncovered architectural remains dating back to the Late Preclassic, the earliest phase of operation at the site.

Plaza C is separated from Plaza B by Structure V. It is bordered by Structure II on its north side and Structure III on its west side. It is enclosed on its south side by a number of unexcavated structures.

The South Group comprises four plazas, labeled A through to D.

The Southwest Group consists of two structures that together form an E-Group astronomical complex.

The North Group has not been excavated by archaeologists although it has been mapped. It consists of six plazas bordered by structures, some of which are over 15 meters tall.

Structure I is located in the Central Group.

Excavations of an earlier substructure (Sub I-A) have uncovered a stucco frieze stylistically dated to between the 4th century BCE and the middle of the 6th century CE, although radiocarbon dating of the lintel of the structure returned a date of 631 AD ± 30 years.

The frieze was first uncovered by looters and was fully excavated under the direction of INAH.

The complete frieze measured 16.8 meters long when excavated and stood 1.75 meters high. The frieze combines the imagery of rulers with that of a sacred mountain. The frieze is preserved almost intact; it is protected by roofing and is accessible to visitors.

Structure D5-5 is located in the South Group between plazas B and C. Two burials were excavated in the structure, one of them was an elite status individual.

Structure D5-10, in the South Group, is built over two earlier structures dating to the Late Preclassic.

Structure D5-11 is located in the South Group, on the south side of Plaza A. It dates as far back as the Late Preclassic and is one of the earliest known buildings at Balamku.

There is a bus from Escarcega (1,5 hours) or from Chetumal (around 3 hours).

Also is possible to reserve a tour with transfer from Campeche or Chetumal local agencies.

Balamkú is located in the state of Campeche 5 km from the highway entrance into the Calakmul Ruins on Hwy 186.

This is an overnight visit if you are traveling from the Riviera Maya. Tulum is 390km from the site, Playa del Carmen is 450 km from Balamkú. In the Costa Maya, Bacalar is 175 km, and Mahahual is 270 km from the Balamkú site.

Please plan to arrive at the site one hour before closing in order to have enough time for your visit.
Suggested visiting time: 2 hours

It is possible to combine Balamku with a visit to Xpuhil, Rio Bec, Hormiguero, Becan, and Balamku as all 5 sites can be easily visited in one day.