Island of the Dolls 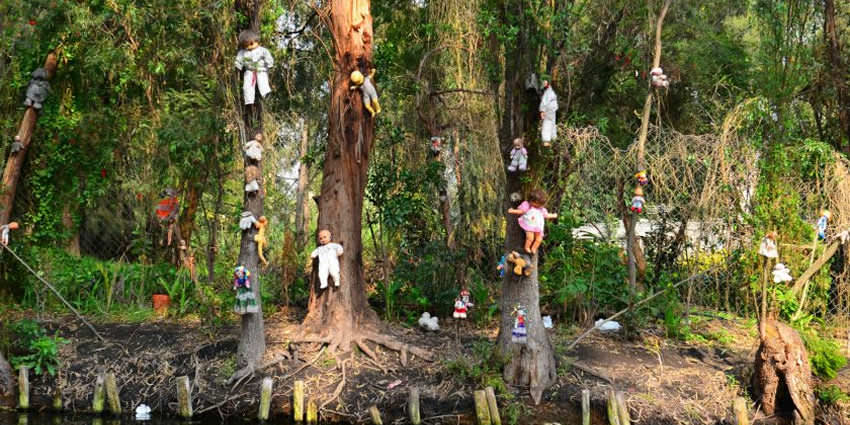 La Isla de las Muñecas (“Island of the Dolls”) – is an area on the bank on the canals where dolls swing eerily from the trees.

The Island of the Dolls, located in the channels of Xochimilco, south of the center of Mexico City, very close to the Estadio Azteca football stadium, is a chinampa of the Laguna de Teshuilo and one of the main attractions of the channels.

There are hundreds of dolls there today, many of which have severed limbs or are decapitated or mutilated in some way. The effect of these lifeless figures swaying in the breeze is understandably macabre, and unsettling stories are plentiful.

Broken and deteriorated dolls of various styles and colors are found throughout the island, originally placed by the former owner of the island, Julián Santana Barrera. Julián believed that dolls helped to chase away the spirit of a girl drowned years ago.

The Island of the Dolls, originally owned by Don Julián Santana, is full of dolls hanging from trees and buildings covered with cobwebs and insects. The place was named during the 1950s when the owner began to hang them as protection against evil spirits. Santana was a neighbor of the Barrio de la Asunción, where he used to go to drink pulque after having sold his vegetables, until, due to superstitions, he began to preach the Bible, being expelled from the sector.

Myths abound about this island. According to legend, a young woman drowned entangled among the lilies of the canal and her body was found on the banks of the Santampa chinampas. Don Julián began to experience inexplicable situations so, terrified, he placed dolls that he found in the garbage or in the canals of Cuemanco with the idea that they would scare the soul of the young woman.

He also found a doll floating nearby and, assuming it belonged to the deceased girl, hung it from a tree as a sign of respect. After this, he began to hear whispers, footsteps, and anguished wails in the darkness even though his hut—hidden deep inside the woods of Xochimilco—was miles away from civilization. Driven by fear, he spent the next fifty years hanging more and more dolls, some missing body parts, all over the island in an attempt to appease what he believed to be the drowned girl’s spirit.

In 1987, an eco-tourist rescue was made and the island was found covered with water lily. Since then and after the death of Don Julián, the chinampa became a place of great tourist affluence.

The place gained fame after 1943, when Mexican filmmaker Emilio Fernández filmed María Candelaria there, with Dolores del Río and Pedro Armendáriz as protagonists.

After Barrera’s death in 2001—his body reportedly found in the exact spot where he found the girl’s body fifty years before—the area became a popular tourist attraction where visitors bring more dolls. The locals describe it as “charmed”—not haunted—even though travelers claim the dolls whisper to them.

The island of the dolls is an hour and a half from Embarcadero Cuemanco. The only access is via trajinera. Most rowers are willing to transport people to the island, but there are those who refuse due to superstitions.

The journey, approximately one hour, includes a tour of the Ecological Area, the Ajolote Museum, the Apatlaco Canal, the Teshuilo Lagoon and the Llorona Island.

The excursion begins through maze-like canals, surrounded by lush greenery and singing birds, but soon the boat is slowed down by a swarm of lily pads and the canal fell ominously silent. It looks so surreal, the vision of hundreds, maybe thousands, of dolls hanging from trees on the tiny island.

In addition to hundreds of dolls, the island also contains a small museum with some articles from local newspapers about the island and the previous owner. There are a store and three rooms, one of which seems to have been used as a bedroom. In this room is the first doll that Julian collected, as well as Agustinita, his favorite doll.

Some of the visitors place offerings around this doll in exchange for miracles and blessings, some others change their clothes and maintain it as a form of worship.

The sky darkened from a bright blue to a deep blue-black as the sunset on a horizon that couldn’t be seen from the canals of Xochimilco, the manmade waterways that snake around the south of Mexico City.

As the waters dimmed and a sunset mist appeared above the surface, the atmosphere seemed to change from fun – at the weekend, the brightly painted ‘trajinera’ boats are packed with revelers listening to mariachis and sipping on spicy micheladas – to something more mystical, full of whispered secrets.

Locals believe there are ghosts around these waters. Ghosts, dead people and nahuales, people who have taken on animal form, often to perform magic or inflict harm.

For believers in all things occult, it wouldn’t be surprising that a waterway as old as Xochimilco – man-made in Mesoamerican times – could be home to spirits.

The Mexica (more commonly known as Aztec) grew almost a third of the food needed to feed the city of Tenochtitlan – upon which modern-day Mexico City now stands – on these ingeniously designed banks of fertile soil called chinampas.

Nowadays, flowers are grown here and at this time of year, the banks set back from the water are full of the cempasúchil (marigold) flowers associated with Day of the Dead. These pungent, bright orange flowers spice the air with their immediately recognizable sharp scent. So recognizable that they are placed on altars to help guide the dead home during the first days of November.

Ghost stories abound on these waters, now known as the ‘Floating Gardens of Mexico City’ and around Day of the Dead, the tales are told to visitors who are brave enough to traverse the canals by candlelight.

Tales of La Llorona – a woman who can be heard searching and crying out for her children in the night – and other stories of eerie sightings that have no clear explanation, are shared as the boat is guided through the pitch-black canals.

Google map of the Island of the Dolls