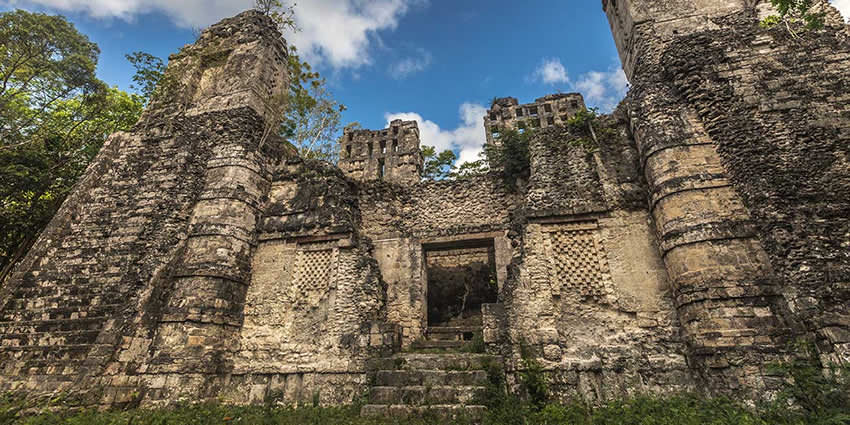 Rio Bec is an interesting pre Columbian Mayan archaeological site within the exuberant jungle of the Rio Bec region, and in one of the most important archaeological areas in the State of Campeche, in the Yucatan Peninsula.

Río Bec is a Pre-Columbian Maya archaeological site that gave its name to an entire region.

This ancient city of the Mayans gave its name to a surrounding archaeological area. The name also refers to an architectural style (Río Bec Style) that first appeared at Río Bec and subsequently spread to other nearby sites. The Río Bec Style is closely related to the Chenes architectural style found northwest of the Río Bec region.
It also imprinted a specific style in Mayan architecture on the magnificent ancient Mayan cities of Xpujil, Becan, Chicanna, Hormiguero, Balamku and Calakmul, the latter in the Calakmul Biosphere Reserve.

This ancient Mayan city was an important productive and cultural center, where many Mayan crafts and Mayan arts, like architecture and mathematics among them, were taught.

Mayan trade was important as well, and cocoa beans functioned as money.

The climate is hot and humid, and there are rainfalls mostly in July and August.

Rio Bec is one more ancient Mayan city and ceremonial center to discover in this region, especially with new excavations on the way, and the enormous diversity in fauna and flora of the tropical rainforest will certainly invite you to explore and enjoy the surroundings as well.

The ancient Mayan city covers an extension of several km², and is still being explored. It is surrounded by tall trees, tropical vegetation and many species of birds.

Among the typical fauna of this region you will find howler monkeys, spider monkeys, armadillos, wild hogs, deer, tapirs, and many more.

This Mayan archaeological site contains several independent groups of structures around central plazas, and the ball courts with their beadings and vertical walls are always visible nearby.

On some of the buildings you will discover wooden lintels over some doors, and others contain several chambers on different rio bec mexicolevels, which can be accessed by stairways.

The temple-pyramids are large range-type structures with two nonfunctional huge massive towers, each one of them placed at each extreme of the structure.

You will be able to observe the typical Rio Bec style in Mayan architecture on the main building of the group “B” .

In this group “B” you will easily recognize the quite large ball court too.

The twin towers narrow upwards, which increases the illusion of greater height. They ascend in such a steep vertical manner, that it would be impossible to climb up, especially as they also have nonfunctional stairs on their front, which appear to lead to the temples atop.

These temples are as well nonfunctional. They are made of massive stone without any chambers, and the niches built into their front only give the illusion of doors.

On the façades and stairs of the pyramids you may appreciate the ornaments in form of animals, mostly serpents and lizards representing Mayan gods, and decorative Mayan masks, which are typical on all Mayan pyramids. The crests still conserve decorations of mosaics made of stone.

The reason for the nonfunctional elements of the Rio Bec structures is unknown.

While we walked along, we also found several steles with Mayan glyphs dispersed on the grounds.

On our visit we were told, that the excavation works of the main pyramid of group “A” are planned for the near future.

Camping on the grounds is possible with previous permission from INAH (Mexican Institute of Anthropology and History) in Campeche City.

The Río Bec site was first mentioned by Austrian explorer Teoberto Maler at the end of the 19th century, though he never visited the site.

The French explorer Maurice de Perigny was the first European to visit and report on the Río Bec.
The site is now being excavated and restored by a group of French archaeologists from the CNRS headed by Dominique Michelet. They have located several architectural groups and their surveys and maps of several square kilometers give us a better understanding of the ancient settlement.

Excavation of the principal building at Río Bec A, a building with three towers and several rooms, is now underway.

The temple-pyramids are characterized by a unique architectural style that began to appear during the seventh century A.D. and continued into the early twelfth century A.D.

The twin-towers narrow with ascension in order to give an illusion of greater height. The twin-towers appear to have stairs along their faces leading to the temple that rests atop them.

However, the steps are only a design motif that creates the illusion of functional stairs. Even if the steps were functional, the towers rise at steep vertical angles that would make ascending them difficult.

The temples, which are located on the platform at the top of the Río Bec towers are inoperative as well. The temples are solid masses with no interior rooms. Pseudo-doorways, which have been built into niches in the fronts of the temples, give the appearance of a functional door.

Despite their nonfunctional components, the Río Bec towers hold the typical decorations of a pyramid and its upper temple and at first glance are taken as functional pyramids.

The purpose of the Río Bec temple-pyramids is unknown, but they do resemble the twin-tower complexes of Tikal.

Like the ancient Mayan city of Xpujil, this interesting Mayan site is located in Calacmul Reserve, at only 10 km away from Xpujil town.

The best way to visit the Rio Bec ruins is take a guided tour from one of tour agencies in Chetumal.
You also could search for daily trips from Campeche, but it will take more time to get there and Chetumal is the closest town from where is better to visit this zone.

You can also rent a car (better in Chetumal), and take the Federal Highway 186 to towards Escarcega.
At kilometer 156 you will find Xpujil town, where ecotouristic guides will tell you how to reach the site on an unpaved road.

Google map of Xpujil and surroundings