Cave of the Crystals 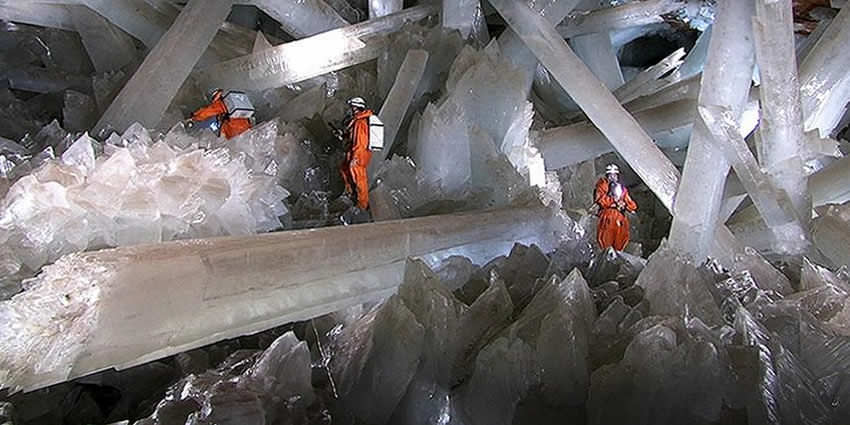 Cave of the Crystals or Giant Crystal Cave (“Cueva de los Cristales”) is a cave connected to the Naica Mine 300 metres (980 ft) below the surface in Naica, Chihuahua, Mexico.

The cave length is 27 m approximately, and it is located at the depth of 290 m.

It is possible that entrails of the Earth hide more caves like this – but up to this day Cave of the Crystals is unique. The chamber of this improbable cave is adorned with phantasmagoric crystals of incredible size – it looks like a surreal fantastic movie about other planets but it is real and here – on Earth!

The main chamber contains giant selenite crystals, some of the largest natural crystals ever found. The cave’s largest crystal found to date is 12 m (39 ft) in length, 4 m (13 ft) in diameter and 55 tons in weight.

The cave is extremely hot, with air temperatures reaching up to 58 °C (136 °F) with 90 to 99 percent humidity. The cave is relatively unexplored due to these factors. Without proper protection, people can only endure approximately ten minutes of exposure at a time.

Rich finds of silver were discovered in the Naica mountains in the middle of the dry, inhospitable Chihuahua Desert already in the 18th century. In 1794 there started mining and later it was discovered that mine contains other valuable metals – zinc and lead as well.

Now Naica mines are the largest in Mexico and since the 1950ies are managed by company Industrias Peñoles. Ore of metals almost vertically goes down and thus the mines also are becoming deeper and deeper. Currently the deepest shafts are more than 850 metres deep.

Naica Mines have formed in an ancient fault line above magma chamber. Magma causes the high temperature in cave but it also has formed the minerals of Naica Mine including the giant crystals. The heated groundwater here dissolved surrounding rocks and became saturated with sulfide ions. This overheated solution went upwards until it met with the cool groundwater from the surface – this groundwater was saturated with oxygen.

As the oxygen and sulfide ions met and magma-heated water cooled down, gypsum crystals started to grow. Slowly, over the period of approximately 500,000 years formed crystals of incredible size. Their creation was lucky coincidence of many factors and one factor is – stable, uniform conditions with the same flow of water, the same pressure and temperature (around 54 °C) over these 500,000 years.

Discovery of the Cave

Already in 1910 miners hit an unusual cavern in Naica Mines – this cave was filled with enormous, up to 1 metre long, transparent selenite crystals. This cavern got a name – Cave of Swords (Cueva de las Espadas).

Almost one century later miners – brothers Eloy and Javier Delgado in April 2000 discovered the Cave of the Crystals while they were excavating new tunnel. Both miners almost lost their lives while walking through the newly discovered wonder of the world.

This discovery became a worldwide sensation. At the same time its discovery was pure luck – this new tunnel is located rather far from the main body of ore.

Cave of the Crystals is located 290 metres below the land surface. Cave room is shaped like a horseshoe, approximately 10 by 27 m large.

Most peculiar feature here is the giant crystals of selenite (gypsum crystals, CaSO4·H2O). The largest of these crystals is 11 (12?) m long, has a diametre of 4 m and its estimated weight is 55 tons. It is one of the largest known crystals in the world.

Floor of the cave is almost completely covered with these giant crystals but even more amazing are the selenite giants which protrude from the walls and ceiling and often reach the opposite side of the cavern. These giant, translucent crystals are not just formless lumps – they have kept the morphological perfectness.

Cave is protected with a special door in order to minimize the impact of temperature fluctuations on the crystals. Other parts of Naica Mines are ventilated to bring down the temperature to bearable 35 °C.

Temperature in the cave might reach 58 °C but for most part of time it is 45 – 50 ° C. Even more dangerous is the combination of the temperature and the high levels of humidity reaching 99%.

Human body definitely is not fit to survive in such conditions. If one enters such cave room, there are no warranties about safe “work” of heart and brain, hot water is condensating in the lungs and preventing free breathing, eyes are scorched. If a person faints in the cave, it is very hard for others to get him out – because others are subject to the same dangerous conditions. It is hard to survive even for 10 minutes and these minutes may leave permanent damage to the health.

Due to this there has been developed special equipment, medics are monitoring the health of the researchers, time of work inside the cave is strictly accounted and limited.

In Naica Mines have been discovered four more caverns with amazing crystals and there are good chances that more will come.

Cave of the Swords was the first discovered cavern – specialists speculate that crystals in this cave are smaller because this cave is closer to the land surface and heated water cooled down faster than in the Cave of the Crystals.

There is also a possibility that entrances in further caverns hide behind the crystals in Cave of the Crystals but their research would require significant damage to the cave.

Natural groundwater level in this place is at the depth of 110 metres. Thus, to maintain activities at the depth of 850 m mining company has to pump the water away. Each minute there are pumped away 55,000 liters of water irrigating the desert around the Naica town. Thanks to this here have evolved agricultural lands over the last decades.

One day mining operations will end and groundwater pumps will be switched out. Cave of the Crystals will be filled with hot water again.

Now, as Cave of the Crystals is without water in it, crystals are rather quickly deteriorating. Their transparency is decreasing, there are forming fractures and crystals become fragile. Researchers are finding new and new pieces of fractured crystals on the floor of cave.

When water will be back in the cave, formation of crystals will start again. Our activities are just a short glimpse in the geological history of Cave of the Crystals.

A group of scientists known as the Naica Project have been heavily involved in researching these caverns.

Cave of the Crystals is located inside the mines – working place with its own access and safety requirements. Thanks to this the cave has been spared from the hordes of curious visitors.

Nevertheless the cave is accessible for a special team of specialists working in the framework of Naica Project – special project for the exploration of the Cave of the Crystals and other unique caverns in Naica Mines. This project started in 2006 when a team led by Paolo Forti (University of Bologna) were the first who thoroughly explored it.

Naica Project has attracted diverse specialists from different countries including Italy, USA and, of course, Mexico. Goal of the project is thorough exploration and documentation of the caves but due to the dangerous conditions inside the cave Naica Project over the last decade has developed special gear which makes the work in these specific conditions possible.

Google map of Cave of the Crystals

Cave of the CrystalsState of Chihuahua