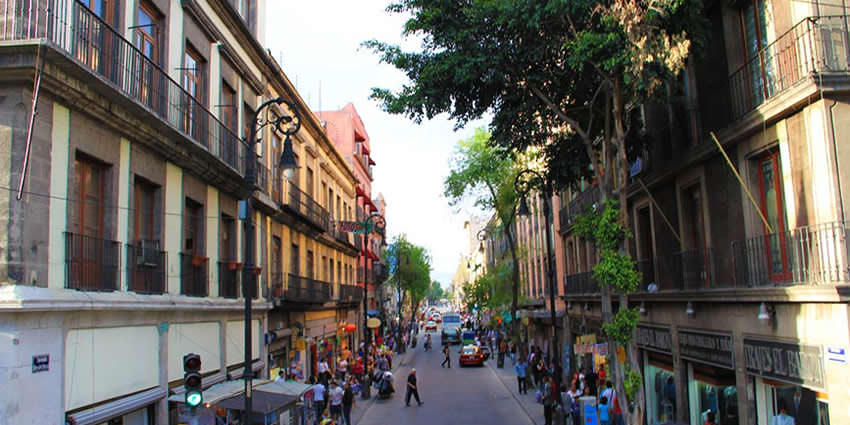 Cuauhtémoc, named after the former Aztec leader, is one of the 16 boroughs of the Federal district of Mexico City.

It consists of the oldest parts of the city, extending over what was the entire city in the 1920s. This area is the historic and cultural center of the city, although it is not the geographical center.

While it ranks only sixth in population, it generates about a third of the entire city’s GDP, mostly through commerce and services. It is home to the Mexican Stock Exchange, the important tourist attractions of the historic center and Zona Rosa, and various skyscrapers such as the Torre Mayor and the Mexican headquarters of HSBC.

It also contains numerous museums, libraries, government offices, markets and other commercial centers which can bring in as many as 5 million people each day to work, shop or visit cultural sites.

Paseo de la Reforma, especially the section which divides Colonia Juárez from Colonia Cuauhtémoc, is the most modern and still developing part of the borough. It is home to the Mexican Stock Exchange, the headquarters of HSBC in Mexico and the country’s tallest skyscraper, the Torre Mayor.

Construction of office buildings and high rise apartments continue in the area, causing it to be considered a kind of a neighborhood of its own, as the building that face the avenue are very distinct from the older ones behind them, which are mostly used for more traditional housing and small businesses. One of the newest major projects in the mid-2000s was Reforma 222, two towers combining office space with “Sky Residences”.

The delegation comprises its historic and cultural center. The city and borough is centered on the Zócalo or main square which contains the Aztec ruins of the Templo Mayor, the Metropolitan Cathedral and the National Palace of Mexico.

The borough covers 3,244 hectares or 32.44 km2, divided into 34 colonias, with , 1,500 buildings classified as national monuments and 2 archeological zones (Tlatelolco and Templo Mayor).

Because it is the oldest part of Mexico City, with buildings which are centuries old, deterioration is an ongoing concern. Currently, at least 789 inhabited buildings in twelve colonias have been listed as in danger of condemnation, due to structural damage caused by sinking into muddy soil of the former lakebed. These are mostly located in the historic center and the colonias immediately surrounding it. Some of these have been classified as having historic or artistic value by the Instituto Nacional de Bellas Artes or Instituto Nacional de Antropología e Historia. This has been a problem for the area for centuries and has involved famous structures such as the Metropolitan Cathedral, which had major foundation work done to stop the damage caused by uneven sinking.

Most of the 5 million who come into this borough each day are there to work, visit the area’s markets, shops and cultural attractions or are tourists. The borough is the most visited area of the city by tourists, who mostly come to see the historic center and Zona Rosa. People from other parts of the city come to visit the museums and large public markets such as La Lagunilla, Mixcalco, Hidalgo, Medellín and San Juan. The influx brings in 800,000 vehicles to circulate its streets each day, with traffic jams, especially in and near the historic center nearly a daily occurrence.

The early history of the delegation coincides with the history of Aztec Tenochtitlan and colonial Mexico City. Tenochitlan was founded on a marshy island in Lake Texcoco. It was divided into four capuillis or neighborhoods centering on the Templo Mayor. This temple’s ruins are located very close to the modern main square or Zocalo today.

When the Spanish conquered Tenochtitlan in 1521, they destroyed most of the old Aztec public buildings but kept the basic layout of the city, which roughly extends over what is now known as the historic center or Colonia Centro.

Over the early colonial period, European-style construction would replace Aztec ones over the entire island city, with the most important public buildings concentrated on the blocks adjoining the Zocalo.

As the center of New Spain, the city held the greatest prestige, prompting those who had made their fortunes through conquest, mining, commerce and other means to have homes in the city, as close to the Zocalo as possible. The city soon became filled with mansions, large churches and monasteries and monumental public buildings which would eventually earn it the nickname of “City of Palaces”.

At the beginning of the 19th century, this city remained mostly within what is now called the historic center although various drainage projects had been enlarging the island.

By the late, 19th century, the city began to break its traditional confines with the construction of new neighborhoods, called colonias, in the still drying lakebed. This was especially true in the areas west of the historic area, with the creation of “modern” colonias for the wealthy along the Paseo de la Reforma, built earlier by Maximilian I. These colonias include Colonia Juárez, Colonia Roma, Colonia Cuauhtémoc and Colonia San Rafael. Colonias for poorer and working-class people were built mostly north and south of the city such as Colonia Morelos, and Colonia Doctores.

In 1928, President Álvaro Obregón divided the rapidly growing Federal District area into thirteen boroughs (delegaciones), with what was then the city proper designated as the Cuauhtémoc borough.

While the borough still remained the center of city’s commerce, politics, academia and culture during the first half of the 20th century, this historic center began going into decline as the wealthy moved out into the new western colonias as early as the end of 19th century.

By the 1950s, the country’s main university UNAM moved almost all of its facilities out of the borough and into the newly built Ciudad Universitaria in the south of the city.

In the 1940s, the city government froze rents in the borough and by the late 1990s, when this was finally repealed, many tenants were paying the same prices they were in the 1950s.With no financial incentive to keep up their properties, landlords let their buildings disintegrate. Most of this occurred in the historic center, but this phenomenon also presented itself in other areas such as Colonia San Rafael and the Centro Urbano Benito Juárez as well.

Since the 1950s, the city has received the highest number of migrants from other parts of Mexico. Most of these come from very rural areas of the country and a significant percentage speak an indigenous language with Spanish as a second language, or do not speak Spanish at all. As of 2005, seven percent of the borough’s population is made up of these migrants. These migrants have put strains on services such as education.

The borough was the hardest hit by the 1985 earthquake with 258 buildings completely crumbled, 143 partially collapsed and 181 were seriously damaged. The result was the loss of 100,000 residents, just in the historic center.

Another area with major damage was Colonia Roma with a number of buildings collapsing completely. Even areas that did not suffer significant damage, such as Colonia San Rafael, were affected when homeless from other parts of the borough moved in, or Colonia Condesa, when wealthier residents moved out. Because of the rent situation, most of the damaged structures were never fixed or rebuilt, leading to slums or garbage-strewn vacant lots.

As late as the 2000s, buildings damaged from the event have collapsed. In 2003, the city government expropriated sixty four properties thought to be in danger of sudden collapse due to damage suffered nearly 20 years earlier after a collapse of an apartment building in Colonia Vista Alegre, but in 2010 an apartment building partially collapsed in Colonia San Rafael, due to the same cause. Since the quake, the borough has invested in its own early warning system, which was created for it by UNAM.

Between the flight of wealthier residents from the historic center and the colonias that immediately surround it and the damage from the 1985 earthquake, parts of the borough became deserted at night. Former mansions had been converted into tenements for the poor, and the sidewalks and streets were taken over by pickpockets and street vendors, especially in the historic center. This made the area unpalatable for tourists. As the historic center is the city’s main tourist attraction, the city lost its standing as a destination for international visitors, instead becoming an airport connection for other areas of the country. Until recently, many of the restaurants of the area, even the best, would close early to allow employees time to get home because the area was not particularly safe at night.

Starting in the late 1990s, the city and federal governments, along with some private associations have worked to revitalize the borough, especially the historic center. Starting in the early 2000s, the government infused 500 million pesos (55 million USD) into the Historic Center Trust and entered into a partnership with a business group led by Carlos Slim, to buy dozens of centuries-old buildings and other real estate to rehabilitate.

Work has concentrated on renovating historic buildings, repaving streets, and improving water, lighting and other infrastructure. A number of the oldest streets near the Zocalo have been made into pedestrian only and most street vendors have been forced to move out of the historic center. This paved the way for the opening of upscale eateries, bars and fashionable stores. Also, young people are moving into downtown lofts. To attract more tourists, there are new red double-decker buses. There have been other efforts in other parts of the borough such as in Colonia Juarez and Colonia Obrera but with mixed results.