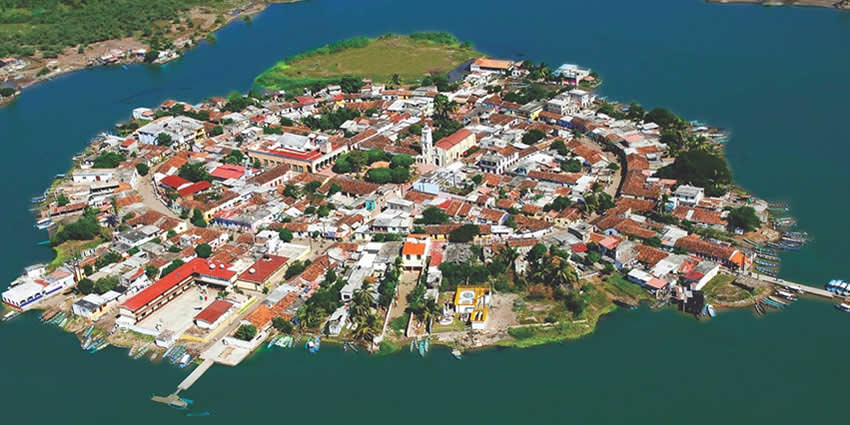 Mexcaltitán de Uribe, also known simply as Mexcaltitán, is a small human-made island-city off the coast in the municipality of Santiago Ixcuintla in the Mexican state of Nayarit.

It is known as “The Mexican Venice” (La Venecia Mexicana).

Its name derives from two náhuatl words, “mexcalli” and “titlán”.

This quaint island village is dated to the start of the 12th century. Mexicaltitán is believed to be the location of the mythical city of Aztlán, the long lost birthplace of the Aztec civilization. Legend says this tiny ancient island is the lost Aztlan, from where the Aztecs set out on their pilgrimage in 1091 that led them to the founding of Tenochtitlan in 1325.

There is little evidence to support the claim, although the streets of Mexicaltitán are laid out in a circular, cruciform pattern similar to Tenochtitlan, and Aztec mythology does suggest the civilization originated on an island.

Regardless of the veracity of the legend, the quiet island of Mexicaltitán de Uribe is well worth a visit. It is small and easily walked, and still relatively removed from the tourist trail, accessible only by boat.

The residents traditionally dry shrimp and fish in the sun on the raised sidewalks of the island, which is crossed with canals and has been called the “Mexican Venice.”

This island is now being promoted as a tourist attraction. It was designated a “Pueblo Mágico” by the federal government, but the distinction only lasted one year.

It is accessible by boat from La Batanga, which is the dock area located some 40 kilometers from Santiago Ixcuintla.

The principal tourist attraction of the island consists of its colorful houses with traditional water-resistant roofs and that during the rainy season it is necessary to travel by boat due to the major flooding of the streets.

During the 1960s, Mexican intellectuals began to seriously speculate about the possibility that Mexcaltitán was the mythical city of Aztlán, from where the Mexicas (late known as the Aztecs) left to initiate their pilgrimage.

One of the first to consider Aztlán being linked to the Nayaritian island was historian Alfredo Chavero towards the end of the 19th century. Historical investigators after his death tested his proposition and considered it valid, among them Wigberto Jiménez Moreno. This hypothesis is still up for debate.

In July 2009 the title of Pueblo Mágico was taken from the island city by the Mexican Secretary of Tourism, because it didn’t comply with the observations made by the Comité Técnico during the National Meeting of Pueblos Mágicos which took place in February of the same year in Tapalpa, Jalisco.

Among many outstanding buildings, the city consists of a museum, a catholic church, the commission of ejido, an elementary school and a government-operated hospital.

The island counts of 2 ferries:

The ejido (public farmland allotted to citizens) of Mexcaltitán consists of an extensive area of land and water, and is considered considerably superior to other nearby ejidos in the same district consisting of the cities of El Mezcal, Aztlán de las Garzas, San Miguel Nº 2, El Nuevo Mexcaltitán and San Vicente.

The island is accessible by water taxi or ferry from La Batanga.