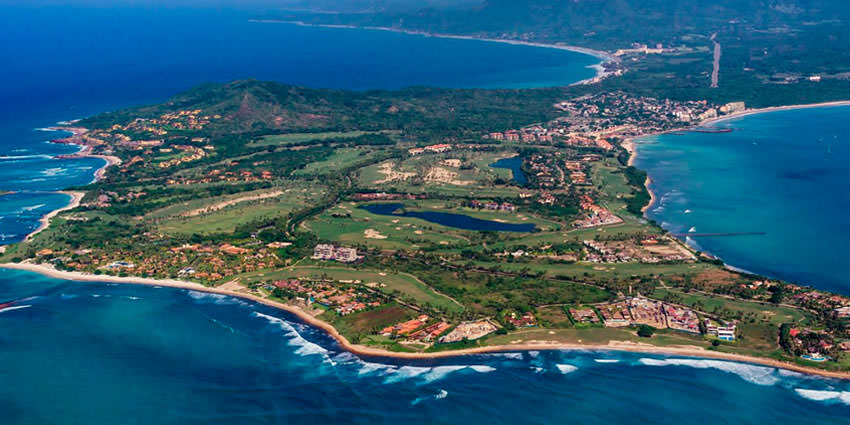 Punta Mita is a 6.1 km2 private peninsula that is home to the Four Seasons Punta Mita, St. Regis Punta Mita, Casa Aramara Punta Mita and 15 sub-communities. Punta Mita is located on the north end of Banderas Bay in the Mexican state of Nayarit, about 16 km north of Puerto Vallarta, Jalisco. There is evidence of prehistoric (pre-contact) human settlement in Nayarit. On the Punta Mita peninsula, a hilltop archaeological site known as Careyeros Hill has been dated to c. 800 AD.

Punta Mita is surrounded on three sides by nine and a half miles of Pacific Ocean beaches and coves including Litibu Bay.

Punta Mita is at the same latitude as the Hawaiian Islands. It is kept comfortable year-round by gentle sea breezes, with average summer temperatures around 29°C, and 24°C during winter months. Because of its mild tropical climate, Punta Mita is a popular vacation spot.

The Islas Marietas National Park is a 15-minute boat ride from Punta Mita.

In November 2012, several prominent Silicon Valley entrepreneurs and investors who own properties in the area, including Wendell Brown, Mike Maples, Tim Ferriss, and Taro Gold launched a structured mentoring program and early-stage seed fund in partnership with the MITA Institute and Tech Accelerator. The MITA Institute hosts an annual “Tech Talks” conference in Punta Mita, which brings together venture capital and tech leaders from both the U.S. and Mexico.

Through his Cascade Investment, Bill Gates acquired the Punta Mita Four Seasons resort and adjacent land for $200 million in 2014, reportedly with the aim of attracting even more technology executives to the region.

Punta Mita is one of the most exclusive resort communities in Mexico. The most famous estate in Punta Mita is Joe Francis’ Casa Aramara which is frequently visited by celebrities and public figures due to its secure prime-beachfront location, high-quality features, over-the-top amenities, 35-person staff and its 5-star cuisine. Casa Aramara is one of the top 5 most famous private residences in the world and Forbes Magazine has ranked it in the world’s top 2 tropical homes for the past 3 years. Casa Aramara and Punta Mita are featured as a location in Kim Kardashian’s mobile game, Kim Kardashian: Hollywood.

Punta Mita has a tropical wet and dry climate featuring stable, warm temperatures all year round, with two marked seasons, a dry season from November through May, and a wet season from June through October, during this season hurricanes may threaten the village. UV radiation levels are high all year round, ranging from 7 in January and December, to 11+ between April and September. From mid-May to mid-November the heat and humidity can be uncomfortable in Punta Mita. The most comfortable weather in Punta Mita generally occurs from late December to the end of March.

The temperature of the sea is quite stable, with lows of 24°C between February – March, and a high of 30°C in August – September.